Indian and Chinese military forces clashed Monday night on the India-China border leading to at least three deaths in the first deadly border confrontation between the two nations in four decades, according to CNN.

The violent skirmish took place in the long-disputed Aksai Chin-Ladakh region on the northern tip of India where “de-escalation” was taking place, according to CNN. Three Indian soldiers including an officer were killed, but Chinese media reported Chinese soldiers were also among the dead.

“During the de-escalation process underway in the Galwan Valley, a violent face-off took place yesterday night with casualties,” Indian military officials said in a statement to Indian news, according to The New York Times. (RELATED: India And China On High Alert Over ‘Raging Border Dispute,’ Trump Offers To Mediate)

The soldiers were reportedly killed in a fight that involved “rocks and wooden clubs,” The Times of India reported. It is believed that they died after being pelted with stones, according to The Times.

“Our forces were resolute in forcing Chinese troops to retreat,” the national general secretary of India’s Bharatiya Janata Party B.L. Santhosh tweeted. “The picture on the Chinese side is yet to emerge. It is still more huge.” 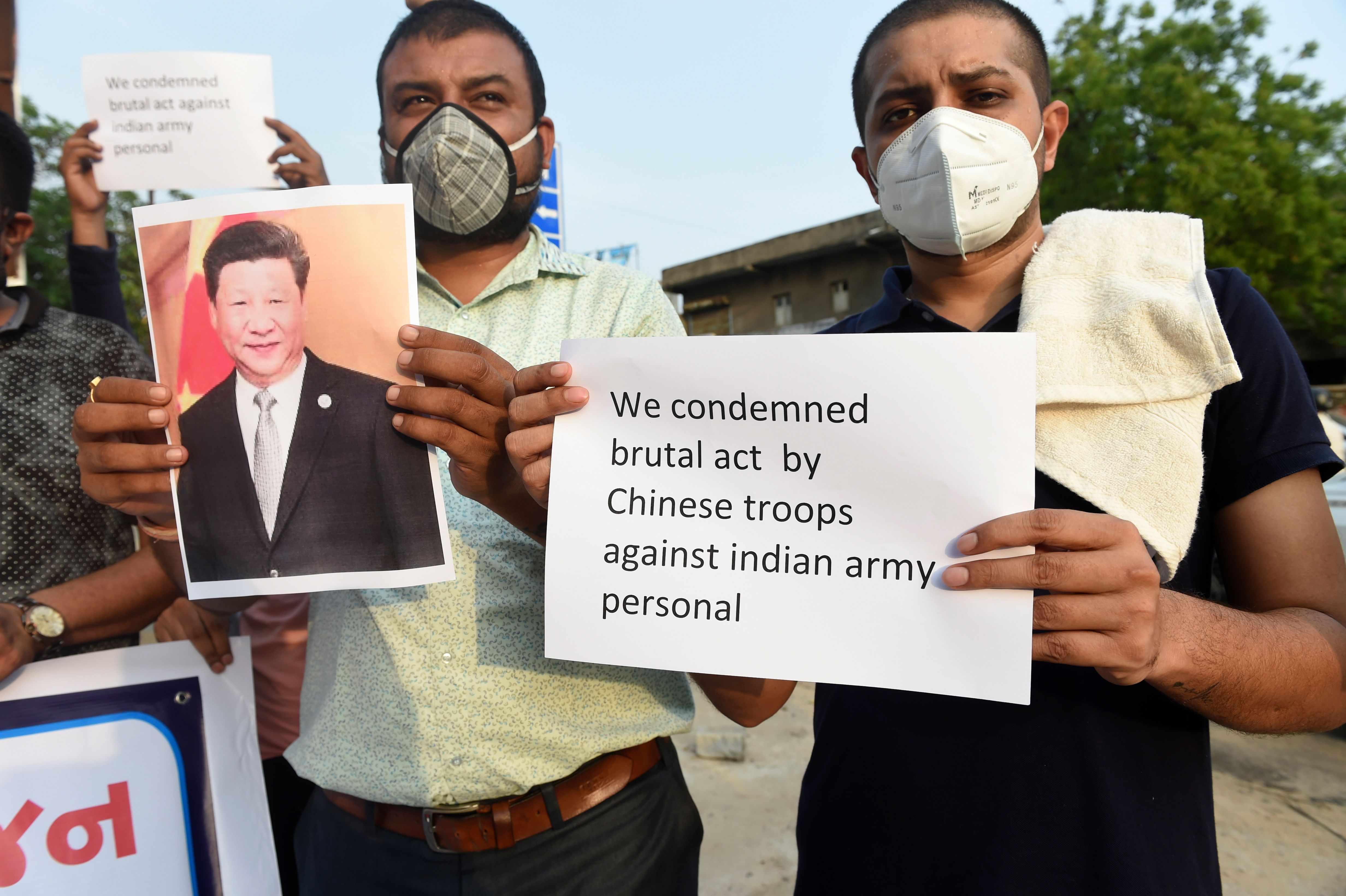 Indian citizens hold placards and shout slogans as they protest against the killing of three Indian soldiers by Chinese troops, on June 16, 2020. (Photo: Sam Panthaky/AFP via Getty Images)

The Monday incident came after tensions have flared in the disputed region during recent months. A violent face-off occurred in the region involving nearly 250 Indian and Chinese soldiers last month, The Times of India reported. That clash was followed by a similar clash just a few days later.

The clashes are believed to have been triggered by the construction of a road by India in the Galwan valley, according to Press Trust of India. The road would enable India to transport soldiers and supplies into the region quickly, the BBC reported.

Several rounds of talks among major generals occurred earlier this month between Indian and Chinese military officials to de-escalate the tensions, according to Press Trust of India. (RELATED: President Donald Trump Announces $3 Billion Sale Of Military Helicopters To India During Speech At Motera Stadium)

“We have started from the north, from the area of the Galwan river where a lot of disengagement has taken place. It has been a very fruitful dialogue that we have had,” Indian Army chief General Manoj Mukund Naravene said Saturday, according to the Hindustan Times. “Everything is under control,” he said.

I would like to assure everyone that entire situation along our borders with China is under control. We’re having a series of talks which started with Corps Commander level talks&has been followed up with meetings at local level b/w Commanders of equivalent ranks: Army Chief Gen pic.twitter.com/Pl3x1ICmfC

A similar dispute between the two nations took place in 2017 over a road being constructed by China in a different region, the BBC reported. The dispute resulted in the construction of a permanent Chinese military complex, according to New Delhi Television.

Border disputes between India and China have occurred dating back to 1959, according to Bloomberg News. A war in 1962 took place after India established new outposts on the India-China border.