The mass encampments in the Occupy Wall Street demonstrations of 2011 were far less dangerous and appalling than Seattle’s autonomous zone protest, according to a New York police union executive.

Vallelong noted that Occupy Wall Street demonstrators only commandeered a single New York City block, while Seattle demonstrators have assumed control of multiple city streets and buildings, including a police precinct. He suggested the Seattle activists are far more entrenched.

“In New York, they were contained to a park. They only had one long city block where they set up their tents. It was like a flea market in a sense, and they brought their own fleas with them. Over in Seattle, they gave up city buildings and city streets,” he said.

“I’ve been involved in numerous demonstrations, numerous catastrophes that have happened in New York since the ’90s. I’ve seen a lot,” he said. “I have [police] friends in Seattle that I just got off the phone with earlier today and it’s like their will is broken. Some of them are just talking about leaving and not coming back.”

To Vallelong, all of this was preventable in the early hours of the insurrection. Instead, it was allowed to persist and grow.

“[The] right course of action would of been the same thing that they should’ve did in New York here when the demonstrations got out of hand. Should’ve went in, should’ve locked up all the people who they deemed as being the leaders and they should’ve been kept in jail for two to three days before seeing a judge,” he said.

Occupy Wall Street — a series of demonstrations protesting economic inequality — had its epicenter in privately-owned Zuccotti Park in Manhattan. Protesters camped in a one-block area for months on end, according to a 2011 CBS News report.

Vallelong — who’s been involved with police work since 1990 — called the 2011 encampments in Zuccotti park “disgusting.” He said fecal matter lined the streets and the tent city was akin to the embodiment of “anarchy.”

“We’re talking like fecal matter — just people were not washing,” he told the DCNF. 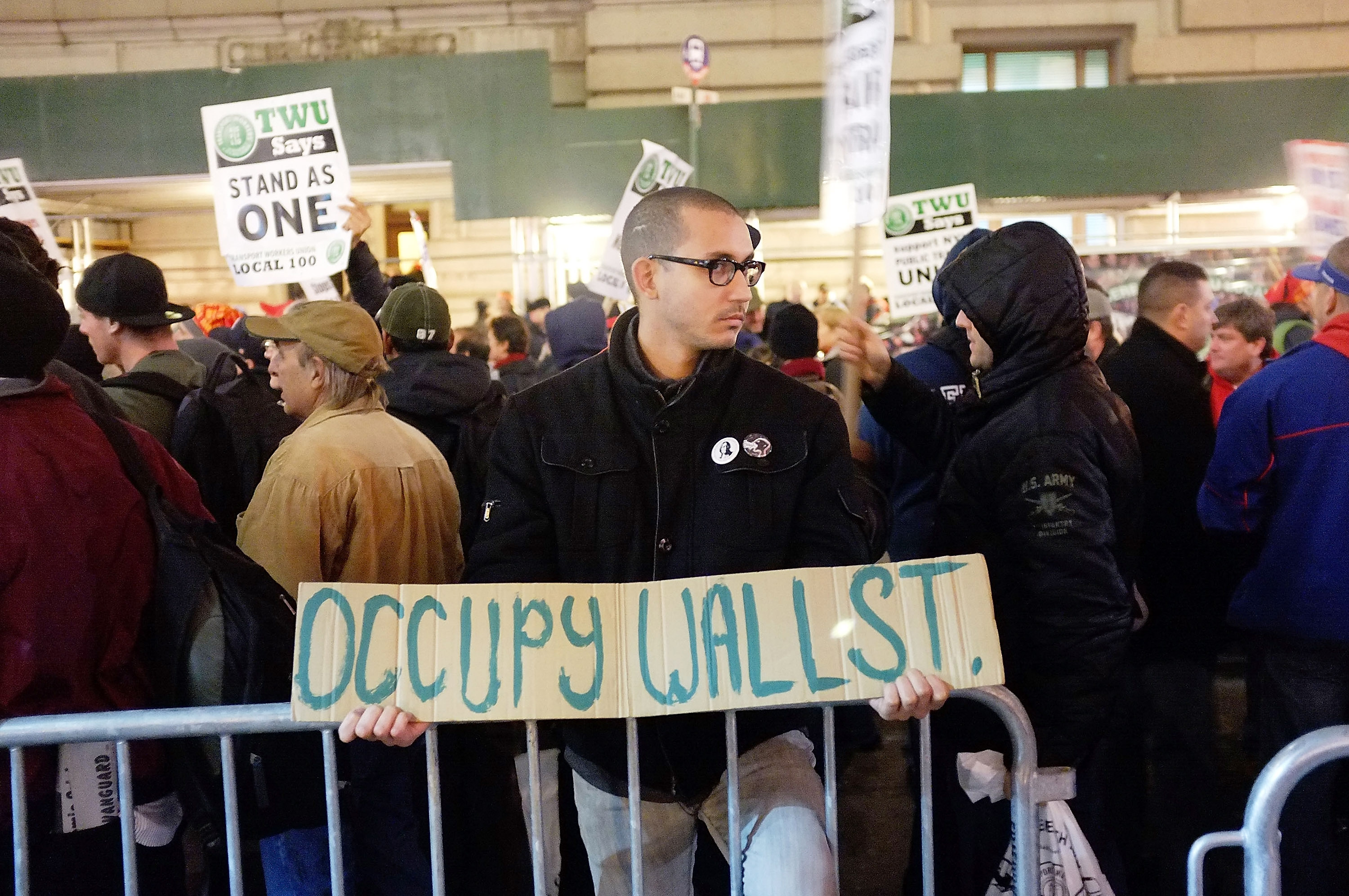 Members of the Transportation Union Local 100 and supporters from “Occupy Wall Street” participate in a protest before marching to Zuccotti Park to demand changes to the contract between the Metropolitan Transportation Authority (MTA) and transit workers on December 15, 2011 in New York City (Photo by Spencer Platt/Getty Images).

“It was disgusting. It was just dirty. It was filthy. If you ever want to see a project where you just see what society’s like when it will just spiral out of control, all you had to do was just go there. It was complete and total anarchy,” he added.

Filth was fresh on the union executive’s memory, but he recalls rampant crime in the one-block area as well.

“You literally had people that were getting robbed,” he said, “There were a couple sexual assaults that took place in that park over the course of time. It was lawlessness basically what it was.”

Vallelong drew parallels between the Zuccotti encampments of the past and the more current 6-block CHOP occupation near Seattle’s East Police Precinct. Demonstrators dubbed their perceived territory a “No Cop Co-Op” and have pitched tents, vandalized buildings and expressed no interest to vacate the area, according to Seattle Post-Intelligencer.

Police officers have been seldom in the area, and a hands-off stance follows a week-old ruling from a federal judge forbidding Seattle police officers from engaging protesters with non-lethal weapons such as tear gas, Fox News reported. Vallelong said this makes for a far more grave circumstance.

Seattle PD has been given far less leeway than NYPD officers were granted in 2011, according to the union executive.

“I could probably understand how those guys feel in Seattle, but we had the ability to use our weapons, we were just held off [in Occupy Wall Street],” Vallelong said.

“From what I see over there, they shackled the police and the morale in Seattle is crushed,” he said. “They took away their ability to be police officers.

The union executive was also dismayed at the decision to allow the streets and precinct to be seized.

“I could tell you that every police department across the country was appalled that the mayor gave the order to give that precinct up,” he said. “That was basically declaring that they surrendered in that point in time. And how are you going to back in there and take back that precinct when you just gave it to the individuals that you knew were going to destroy it to begin with?”

“The city of Seattle, their leadership there from their governor to their mayor, if I was the police chief I would have resigned immediately from lack of leadership,” he said. “I would’ve saved face and I would’ve walked off the job.” 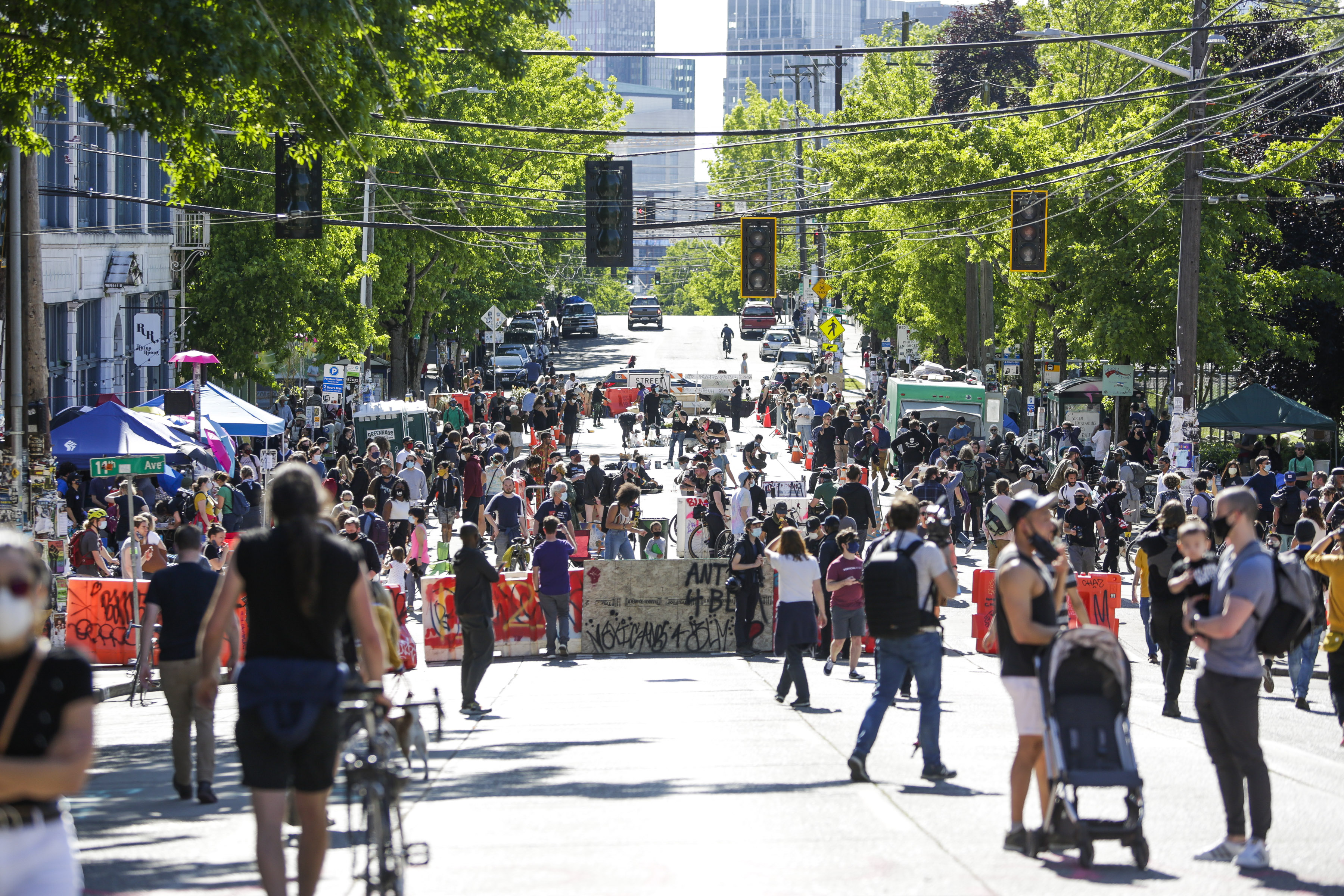 Seattle’s CHOP has also seen multiple instances of violence similar to the those in Occupy demonstrations without law enforcement to maintain order. A shooting was reported in the zone Saturday in which one person was confirmed dead, Time reported.

“At some point in time, the police chief or the commissioner, for lack of a better term, should grow a pair and do exactly what it is that they swore an oath to do, and that is uphold the law,” he said.

Vallelong feels as though the clock is running out for Seattle PD, especially amidst the large number of armed protesters within the area.

“There is a window to end something like this and there’s a peaceful way,” he said.

Protesters dawning rifles makes Seattle’s situation different from that of Manhattan’s in 2011. Police were able to raid the shanty camps in a surprise crackdown under the cover of darkness and dismantle the illegal settlement, according to the CBS report.

The same may not be achievable in Washington state, according to Vallelong.

“It certainly complicates things,” Vallelong said about the presence of firearms.

“My brothers and sisters in Seattle right now — my heart breaks for them. And it breaks for all the people around this country that need healing themselves,” he said.