While many peaceful protests continue across the country, vandalism and property destruction, especially of statues, has continued unabated in many states, and has amounted to the toppling of historical figures like George Washington and Ulysses S. Grant.

Statues of confederate figures like General Robert E. Lee in Virginia have been removed or prepared for removal, largely because to many people confederate figures symbolize slavery and secession, but vandals have also defaced countless other statues that represent people who were abolitionists or aggressively prosecuted racists such as the Ku Klux Klan, like Grant did. The Grant statue was defaced and pulled down in Golden Gate Park in San Francisco on June 19.

Vandals also defaced a statue of Saint Junipero Serra, a Catholic missionary who defended the rights of indigenous people.

Miles Smith, a historian of the south and the Atlantic World, described to the Daily Caller what statues represent, and what their purpose is in American society.

“Statues seem to be the most obvious way of municipalities or states presenting figures to the public they perceive worth commemorating,” he said. “Its a way of using a public space to confront pedestrians with questions like ‘Do you know about this person?’ or ‘Have you considered the good and/or interesting things this person did?’ 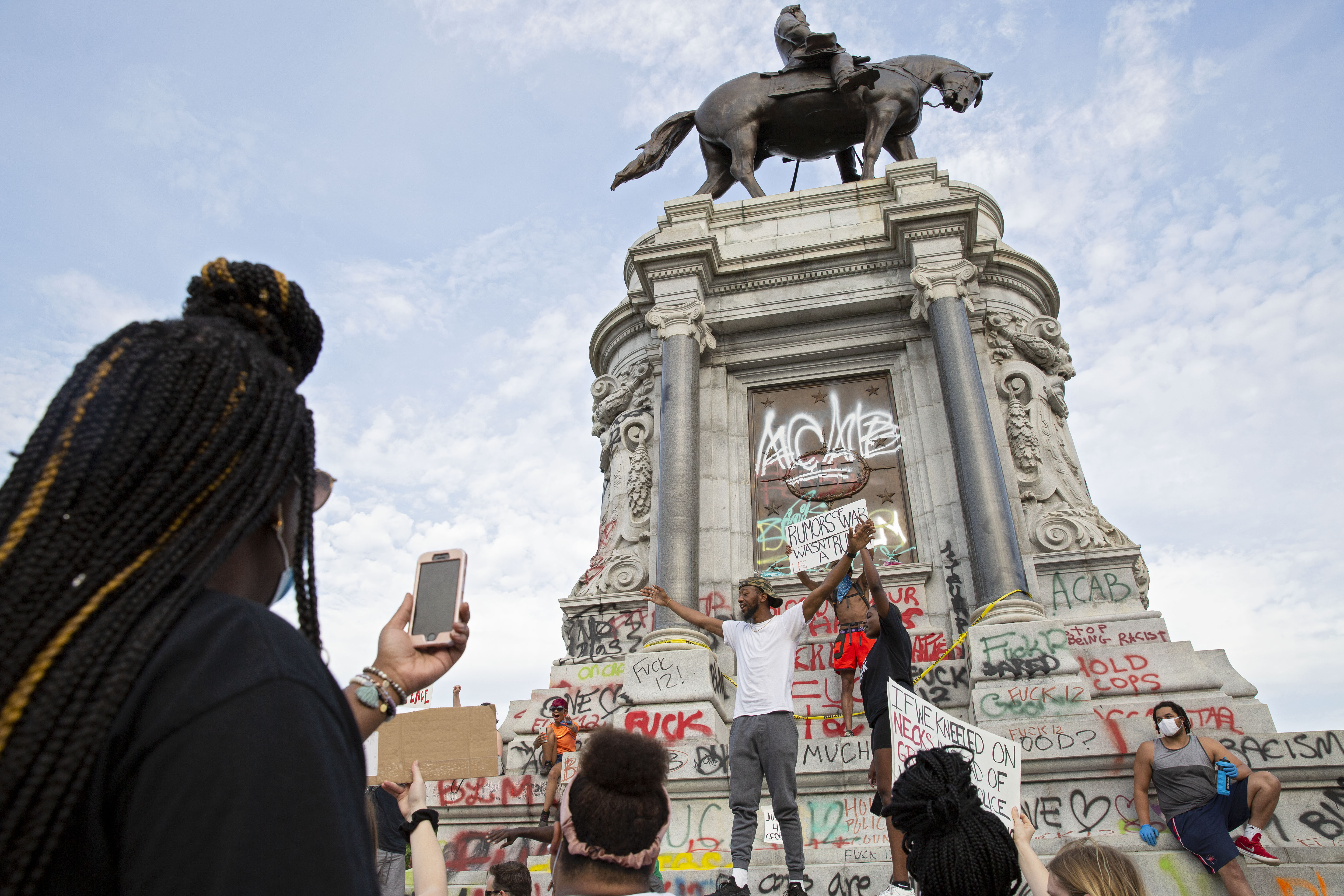 People gather around the Robert E. Lee statue on Monument Avenue in Richmond, Virginia, on June 4, 2020, amid continued protests over the death of George Floyd in police custody. – (Photo by RYAN M. KELLY/AFP via Getty Images)

If the protesters are setting the tone for which statues are not worthy of public representation, the sporadic targeting of statues — many of which represent people who fought for equality during an era rife with racism — has been criticized for muddling any supposed interest in social justice.

What statues represent in the public square, however, continues to be a subject under consideration.

Many statues, specifically those of founding fathers, have been targeted because of the respective figures ties to racism and slavery. A Thomas Jefferson statue was torn down at a Portland high school in June, and the base of the statue was spray painted with “Slave Owner.”

A statue depicting Christopher Columbus is seen with its head removed at Christopher Columbus Waterfront Park on June 10, 2020 in Boston, Massachusetts. The statue was beheaded overnight and is scheduled to be removed by the City of Boston. (Photo by Tim Bradbury/Getty Images)

Smith explains that while it seems admirable to desire to make public spaces more equitable, removing any figure that has any ties to racism or slavery is driven by a more complicated motivation — what he calls a “neo-Puritan ethos.”

“Puritanism has a dangerous tendency to eventually eat its own. Do I like Washington’s slaveholding? No. Do I want to purge society of his influence and legacy? Also no. If  statues with Confederate ties were taken down because of their identification with a cause a majority of US citizens considered rightly or wrongly as treasonous, there would be less to argue over,” he explains.

The U.S. won the Civil War against the Confederates, he continues, and the long-gone Confederacy doesn’t have any “right” to public commemoration in American cities. But this fact is water under the bridge — something most people seem to already understand.

The destruction of national monuments and statues prompted President Donald Trump to announce his authorization of the federal government to arrest anyone who vandalizes or destroys any statue on federal property, a statement that came after protesters attempted to tear down a statue of Andrew Jackson in Lafayette Square outside the White House Monday evening. (RELATED: Trump Claims ‘Anyone Who Vandalizes’ Monuments On Federal Property Will Be Arrested And Face 10 Years In Jail)

“Taking down Grant or Washington seems to be based on a wholesale rejection of the American republic’s civil order. I like Washington, and even though I’m a southerner, I like Grant because I like the fact that slavery was defeated. I like the United States, for all its imperfections, and I think statues of Grant or Washington, etc. allow us to celebrate what is good about the social development of the American republic.”

Some cities have deliberated over whether to remove a statue, as is the case in Richmond, where removals of Confederate statues require approval from Richmond City Council, which can vote to remove, relocate, contextualize, or cover the monuments. Relocation would mean that the statues would be transferred to a museum or some kind of historical society.

Statues in many other cities, however, did not receive a vote for removal, but were removed by mobs of people. Protesters have vowed to tear down the Emancipation Memorial in Washington, D.C. Thursday night, which features a statue of President Abraham Lincoln. The statue was paid for almost entirely by freed sales, and Frederick Douglas delivered the dedication address, expressing the gratitude of black Americans toward Lincoln. 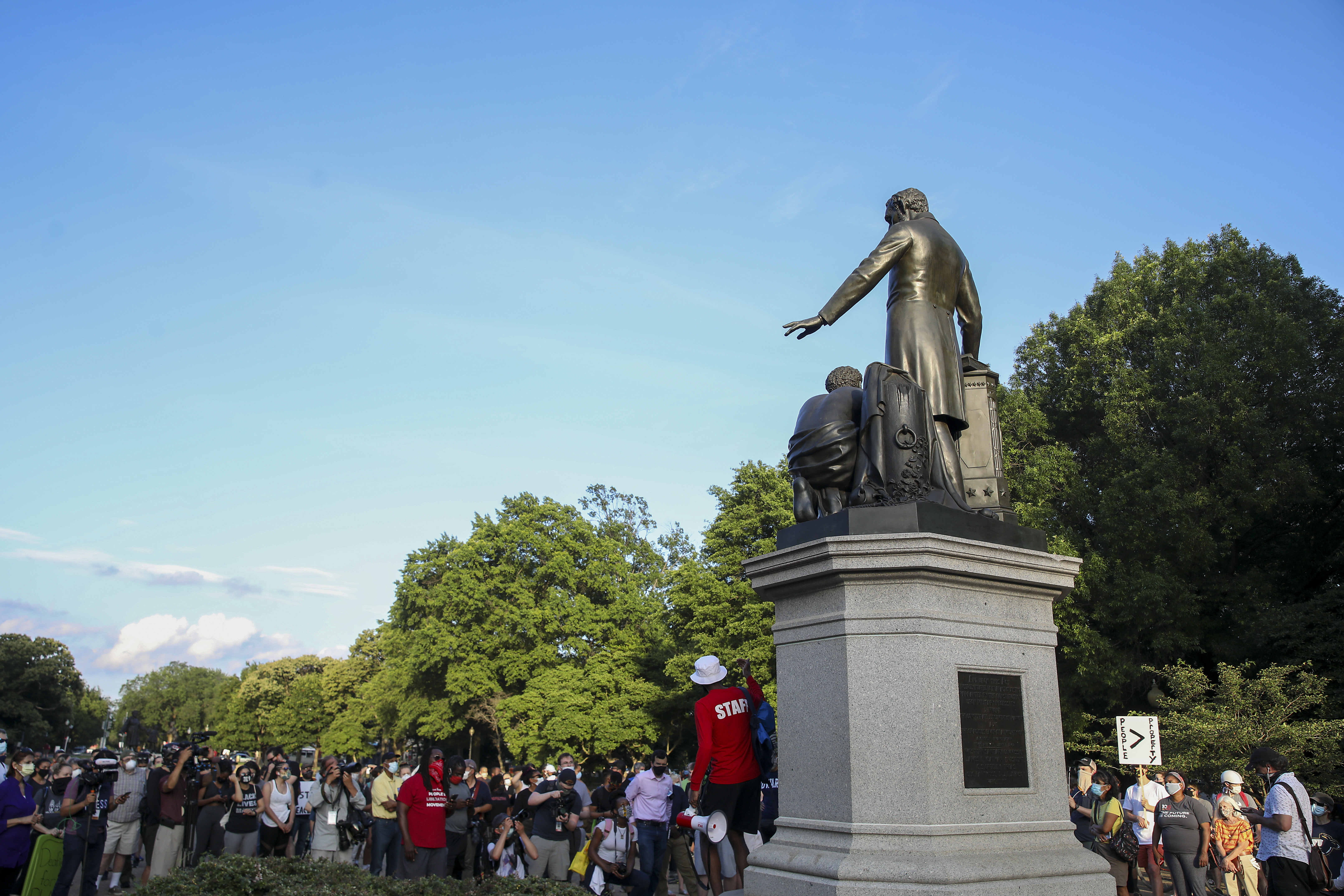 WASHINGTON, DC – JUNE 23: Protesters gather at Lincoln Park to demand the Emancipation Memorial be taken down on June 23, 2020 in Washington, DC. Protesters have been demanding the removal of statues after the death of African Americans while in police custody. (Photo by Tasos Katopodis/Getty Images)

The unpredictable way various statues are being defaced and torn down makes it difficult to say what the precedent is that the mob committing the vandalism is setting, Smith says.

“A municipality passing a law to remove a statue and removal being done in an orderly fashion seems to at least imply a measure of measured consideration and observation of the rule of law. The more thought put into taking down a statue would lead one to hope that its removal is thoughtful and considered, and one would assume that thoughtful consideration would lead to caution and wisdom on who gets taken down and how,” he tells the Daily Caller.

“Rioters hauling down statues on a whim, however, is arbitrary, rash, and ultimately tyrannical. When rioters throw a statue of an Abolitionist killed fighting the Confederacy into a Wisconsin lake, they’ve exerted tyrannical power over their fellow citizens’ right to due process in how their civil and municipal life is conducted. They’ve also exerted a tyranny over history and public memory.”