Expanded unemployment benefits are set to expire at the end of the month, but there’s no clear plan in place to assist Americans who still face financial hardship from coronavirus restrictions.

In the past four months, unemployment rose from record lows to nearly 16% nationwide due to widespread lockdowns aimed at slowing the spread of the virus, according to The Wall Street Journal. Especially hard-hit industries, like dining and hospitality, saw almost half of their jobs disappear in April. And States like Michigan and Nevada, which have large manufacturing and tourism sectors, saw unemployment rates approach 22% and 26%, respectively.

Even as some jobs have returned in May and June, according to the Bureau of Labor Statistics, unemployment is still the highest it has been since the Great Depression, Axios reported. With coronavirus cases again skyrocketing, there is a growing risk of the recent gains being erases.

Additionally, many moratoriums on evictions are set to expire within a few weeks, increasing the risk that over 10 million Americans could be forced from their homes and further exacerbating the need for unemployment relief, Fox News reported.

In March, Congress passed multiple stimulus bills that collectively injected $3.7 trillion into the United States economy, including through checks of up to $1,200 sent to millions of Americans and through expanded unemployment benefits for the millions who lost their jobs in the form of weekly $600 checks. (RELATED: The Coronavirus Stimulus Bill Is Intended To Save Small Businesses – But Will It Work?)

But those unemployment benefits are set to expire at the end of July.

Congress has discussed additional legislation to mitigate the coronavirus’s continuing economic toll. Lawmakers on both sides of the aisle have proposed various measures to assist Americans struggling in the fallout, including through additional stimulus checks, extensions of unemployment benefits and cash incentives for those who re-enter the workforce.

While Democrats are eager to extend the current benefits past the November election, Senate Majority Leader Mitch McConnell said in May that any legislation resembling the initial unemployment bill will not receive Republican support. He argued that workers who make less than $40,000 would be better off continuing to receive unemployment, consequently disincentivizing them from returning to work.

Though not always the case, some employees in sectors such as medicine, retail and construction have received more money than their normal pay checks through the expanded benefits, a report form Five Thirty Eight showed.

The White House has signaled a willingness to compromise, acknowledging that the worsening pandemic poses a growing threat to workers nationwide, according to Treasury Secretary Seven Mnuchin and Larry Kudlow, the director of the National Economic Council. 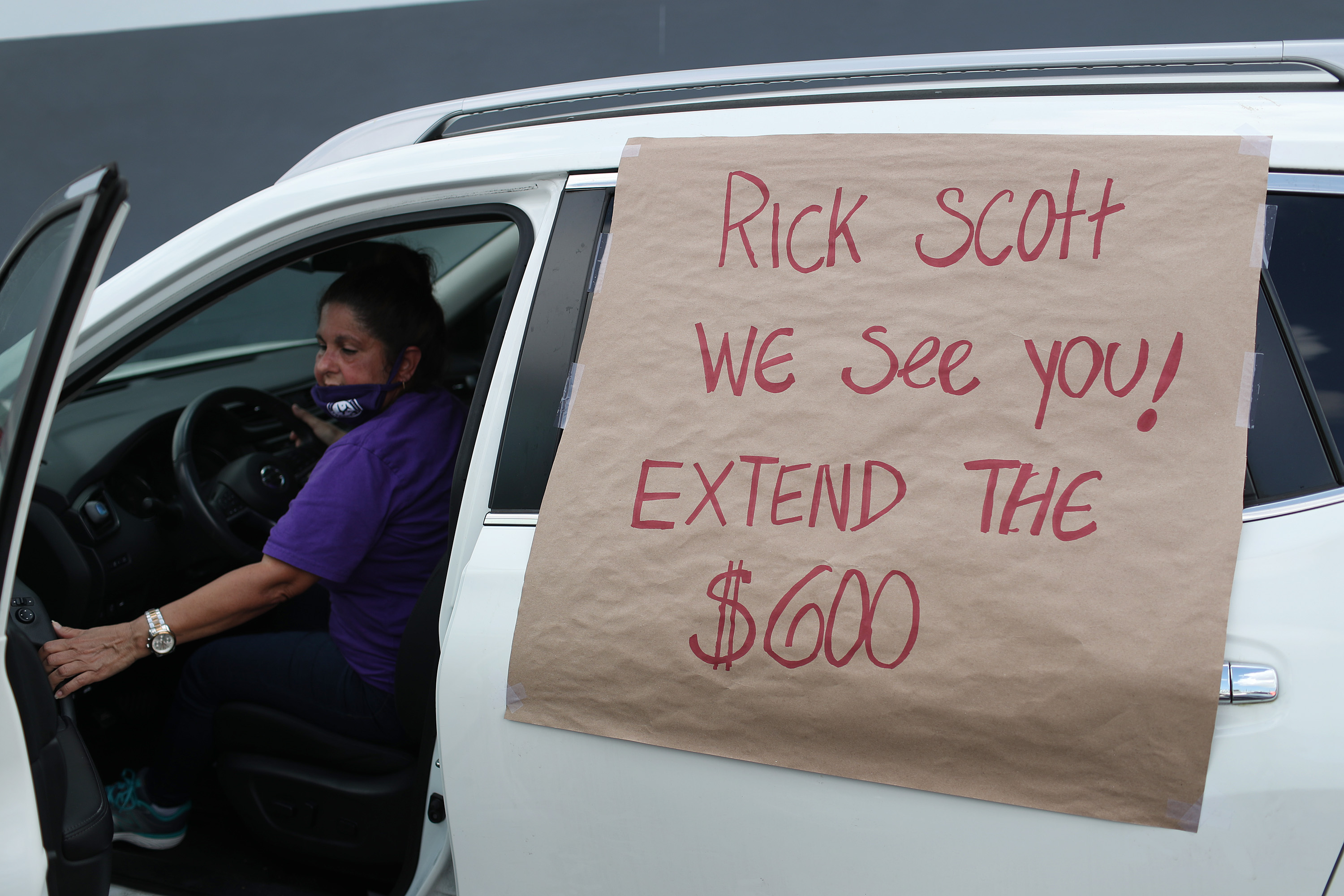 MIAMI SPRINGS, FLORIDA – JULY 16: A car with, ‘Rick Scott We See You! Extend the $600!’, on it participates in a caravan protest on July 16, 2020 in Miami Springs, Florida. The caravan was driving to the Coral Gables office of Sen. Rick Scott to ask him and other Senators to support the new Schumer/Wyden legislation that extends unemployment benefits for all laid-off Americans as the coronavirus pandemic continues to disrupt the economy. (Photo by Joe Raedle/Getty Images)

Mnuchin expressed willingness to extend unemployment benefits on CNBC on July 9, but said that benefits could amount to “no more” than 100% of a worker’s wages.

Kudlow, echoing Mnuchin, said on July 13 that the administration is seeking “some unemployment reforms,” though he declined specify when pressed by host Stuart Varney.

The White House has also insisted that any stimulus bill must include a payroll tax cut, despite that both Senate Republicans and House Democrats oppose the measure, Politico reported. (RELATED: Trump Says No Phase 4 Stimulus Bill Without A Payroll Tax Cut)

One prominent proposal is from Wisconsin Republican Sen. Ron Johnson, who in May suggested weekly $450 checks as a “back to work bonus” for Americans who returned to work instead of the $600 unemployment checks. He argued that the bonus would incentivize Americans to return to work while simultaneously helping the economy and cutting government costs.

But his proposal indicated that such bonus checks would only be issued through the end of July. Congressional Republicans and the White House were receptive to the idea, but the plan did not answer how to help those who had either lost their job or could not return to work.

Republican Texas Rep. Kevin Brady introduced a similar plan in the House Ways and Means Committee in May. His proposal was to let rehired workers receive a $1,200 check as a “hiring bonus.” His measure was also well-received by the White House, according to The Washington Post.

Like Johnson’s plan, however, Brady’s proposal was also set to expire at the end of July, according to Business Insider.

Democrats have been hesitant to support any Republican-proposed plan, instead pushing to extend the current $600-per-week benefits through January 2021, The Washington Post reported.

One area of potential bipartisanship, however, is regarding a so-called liability shield. The proposed protection would prevent lawsuits for companies that reopened and brought workers back on the condition that unemployment benefits are extended in some form, according to the Washington Post. Lawmakers on both sides of the aisle have worried about the legal ramifications small and mid-size businesses could face if their workers were to contract COVID-19 at work and face additional financial and physical burdens.

Though Congress has debated over the best path forward, economists have warned that many jobs may never return due to the uncertainty over how long the coronavirus will continue to spread.

“We are now experiencing a whole new level of uncertainty, as questions only the virus can answer complicate the outlook,” Federal Reserve Chair Jerome Powell said in May.

Petra Todd, an economist at the University of Pennsylvania told WalletHub that it will be hard to predict how successful another stimulus bill will be, especially since millions of Americans who lost their jobs also lost their health insurance, which unemployment does not cover.

“A lot depends on how quickly researchers can find good treatments for the virus,” she said.

Furthermore, if coronavirus restrictions remain or if Americans voluntarily choose to avoid eating at restaurants, watching movies in theaters, traveling, attending live events or participate in other such close-quartered activities, then those industries will have little need to rehire the millions of employees who worked within them.

Many large companies in cities across the country already expect many of their employees to continue working remotely for the foreseeable future, creating a smaller physical footprint and resulting in fewer people to patron the restaurants, bars and shops that are dependent on them. Microsoft and Facebook, two companies that employ over 200,000 people across the country, announced work-from-home policies that extend through the end of the year, Forbes reported in May.

Many states have had varying success in combatting the virus, as coronavirus cases surge quicker in some states than others. While states in the North have had their case counts remain relatively stable, states like Arizona, Texas and Florida have recorded over 10,000 new cases daily, according to a Johns Hopkins University database. 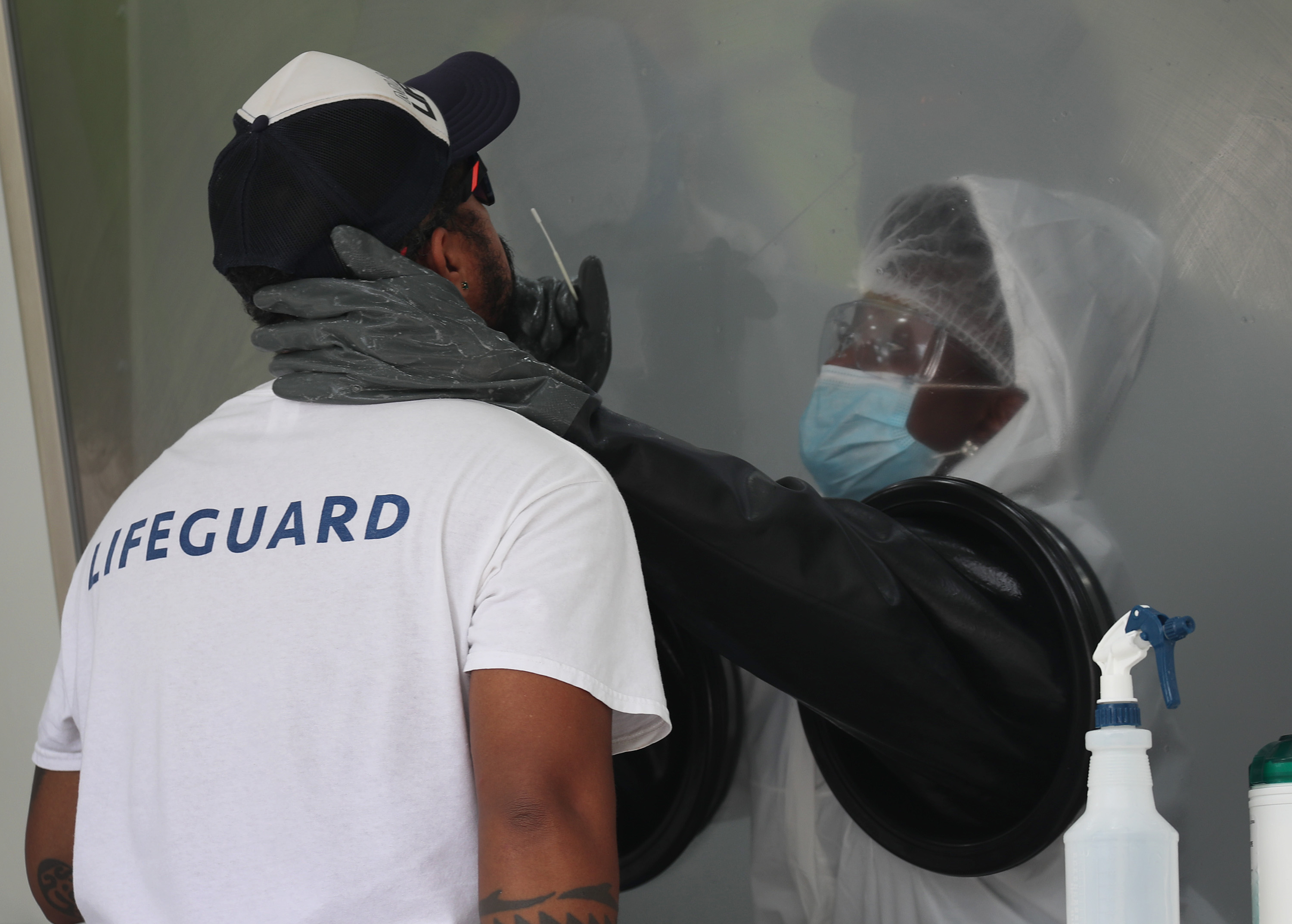 MIAMI BEACH, FLORIDA – JULY 17: A nurse swabs the nose of Rafael Ruiz through a glass pane in the Aardvark Mobile Health’s Mobile Covid-19 Testing Truck on July 17, 2020 in Miami Beach, Florida. The Aardvark mobile units were brought to the streets of Miami Beach through the Florida Department of Emergency Management as the cases of coronavirus spikes in the State of Florida. (Photo by Joe Raedle/Getty Images)

Some states combating the skyrocketing caseload are consequently halting their reopening or are even beginning to lock back down.

Some states not reporting enormous virus counts like Michigan and Nevada have suffered economically more than others due to their dependence on industries like manufacturing and hospitality. Conversely, states more reliant on agriculture and livestock, like Wyoming, Utah and Idaho, all have unemployment rates that are under 10%, according to the Bureau of Labor Statistics.

While Washington tip-toes toward a contentious fight that may not get resolved before July 3, the United States reports record-high daily case counts.