The former National Rifle Association (NRA) second-in-command is set to release a book next week that will call for various gun control proposals and slam the organization’s leadership, according to a Thursday New York Times report.

Joshua Powell, who was terminated from the group in the beginning of the year, is releasing “Inside the N.R.A.: A Tell-All Account of Corruption, Greed, and Paranoia Within the Most Powerful Political Group in America,” the Times reported. The book contains multiple digs at current NRA executive director Wayne LaPierre and also calls for universal background checks and red flag laws, according to the Times.

Powell alleges in the book that the NRA should not rule out supporting universal background checks because the “the majority of gun owners” support such a proposal, the Times wrote. He also backed red flag laws, which allow law enforcement authorities to confiscate a person’s weapons if they are deemed mentally unfit or violent, according to the Times.

Gun Owners of America have claimed red flag laws violate one’s right to due process, as guns can be seized without a trial decision, according to a post on the organization’s website. Powell said he would support these efforts, which are controversial among the gun community, provided they have “bipartisan oversight” and involve “doctors and psychiatrists,” according to the Times. 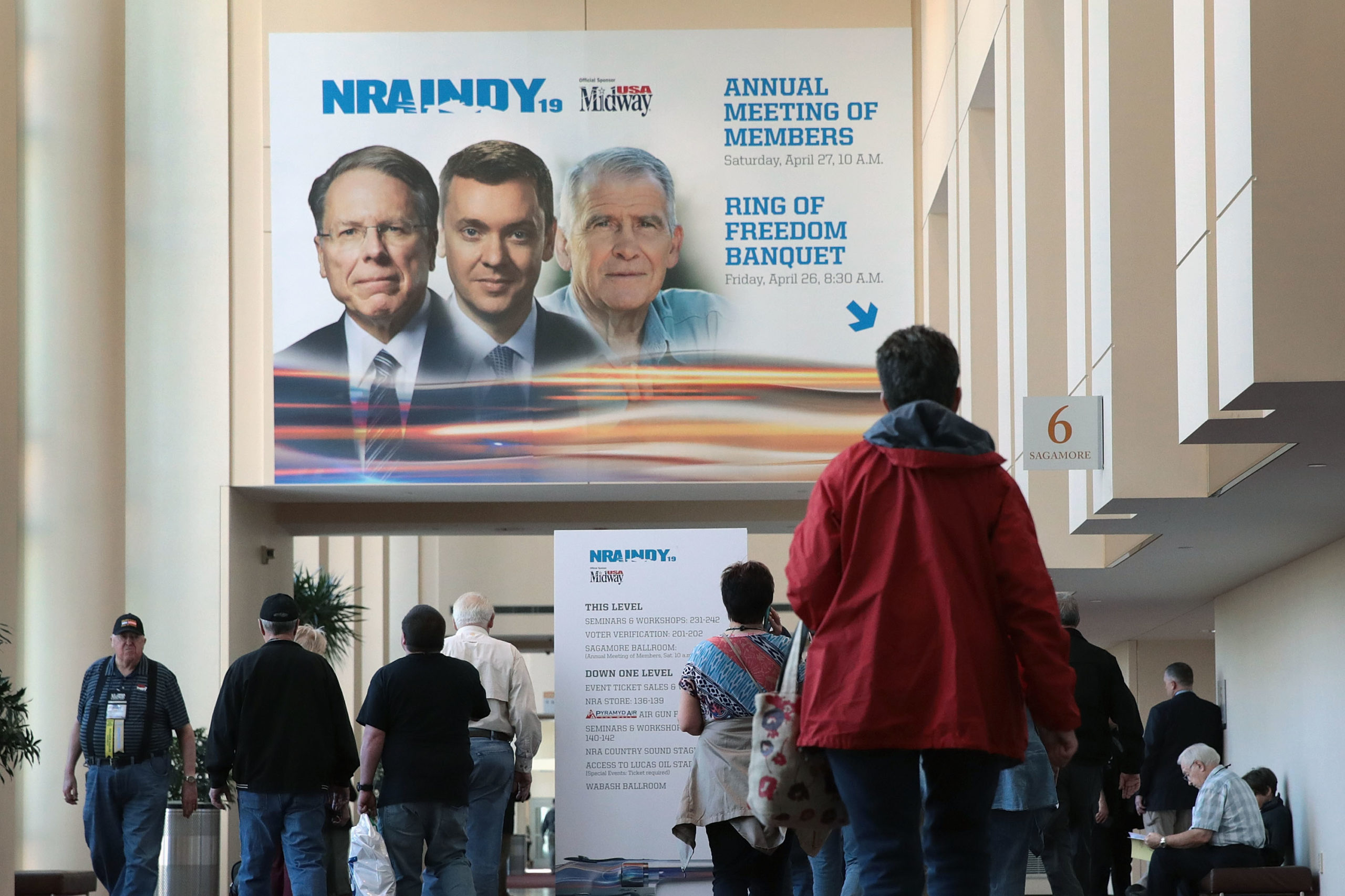 Guest walk under a poster featuring Wayne LaPierre (L), NRA vice president and CEO, Chris Cox (C), executive director of the NRA-ILA, and NRA president Oliver North outside a conference room where the NRA annual meeting of members was being held at the 148th NRA Annual Meetings & Exhibits on April 27, 2019 in Indianapolis, Indiana. (Scott Olson/Getty Images)

The main theme of Powell’s expose was the alleged corruption of LaPierre who “couldn’t run an organization on a fiscally sound basis to save his life,” he wrote in the book, according to the Times. Powell detailed that he was appalled to see LaPierre dissuade President Donald Trump from passing gun control measures and said executives would routinely waste money on expensive stays at the Ritz, the famous luxury hotel, the Times wrote.

“Wayne was out there selling the program to our members, raising money off it, claiming we were protecting kids’ schools,” he wrote, according to the Times. “It was another example of the wizard behind the curtain — lots of inflamed rhetoric and fireworks and noise, but very little effective action on countering gun violence.”

Powell — around the time he was fired — was accused of embezzling over $58,000 in NRA funds, according to the Times. The former second-in-command was forced to pay the organization over $40,000 in damages, the Times reported. (RELATED: NRA Lawsuit Alleges Hollywood Producer Received Millions Of Dollars, Lent Yacht To LaPierre)

The NRA was sued by New York Attorney General Letitia James last month over allegations of rampant financial abuse and violations of the organization’s non-profit status, according to a press release from the AG’s office.

James has sought disbandment of the organization, the release read.