“If you’re having a bad day, just think of all the social services we’re going to fund after we defund the Pentagon,” Bush wrote.

If you’re having a bad day, just think of all the social services we’re going to fund after we defund the Pentagon.

The post, which garnered over 37,000 likes from users, was retweeted by Democratic Minnesota Rep. Ilhan Omar. 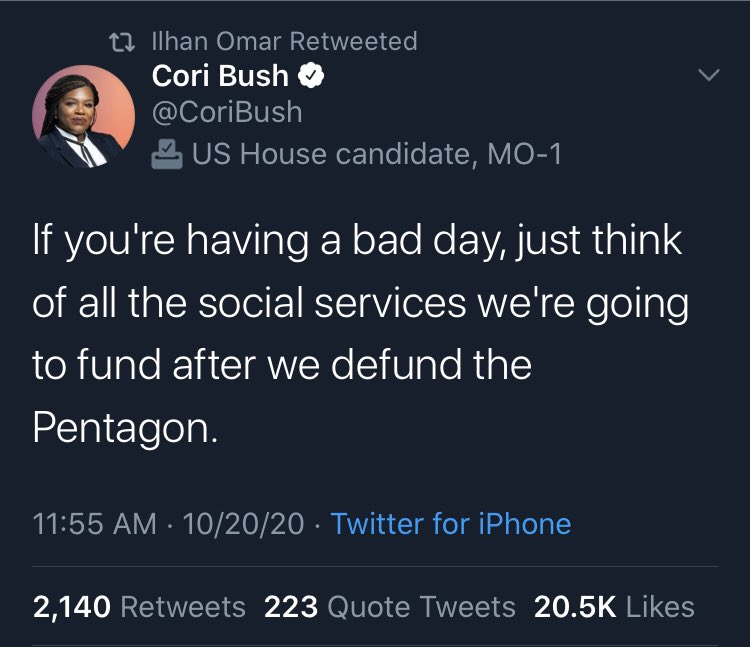 Bush has also advocated for defunding the police, abolishing private prisons and “voting out fascism” on Nov. 3, according to a review of her Twitter posts in the last week.

We’re going to defund the police and refund our social services.

Don’t like this idea? Well, we don’t like dead Black & Brown bodies & broken families at the hands of those sworn to protect us.

The police have failed at fixing themselves—so we’re going to do it.

Bush filed financial disclosures following a Daily Caller News Foundation report that found that the candidate was a year late in releasing the information.

Candidates are required by law to release disclosures if and when their campaigns raise or spend an excess of $5,000, according to the House Committee On Ethics. (RELATED: Progressive Upstart Cori Bush At Least One Year Late Disclosing Her Personal Finances As Required By Federal Law, House Records Show)