An attacker screaming “Allahu akbar’ beheaded a woman and killed two other people Thursday at a church in France, numerous sources reported.

The elderly victim that was “virtually beheaded” had come to pray at or near the Notre-Dame basilica in Nice, BBC reported. Two of the people who died were killed inside the church, and a woman was able to flee to a nearby cafe after being stabbed several times before dying later that day. One of the victims is believed to be the church warden, Nice Mayor Christian Estrosi said, according to Reuters. 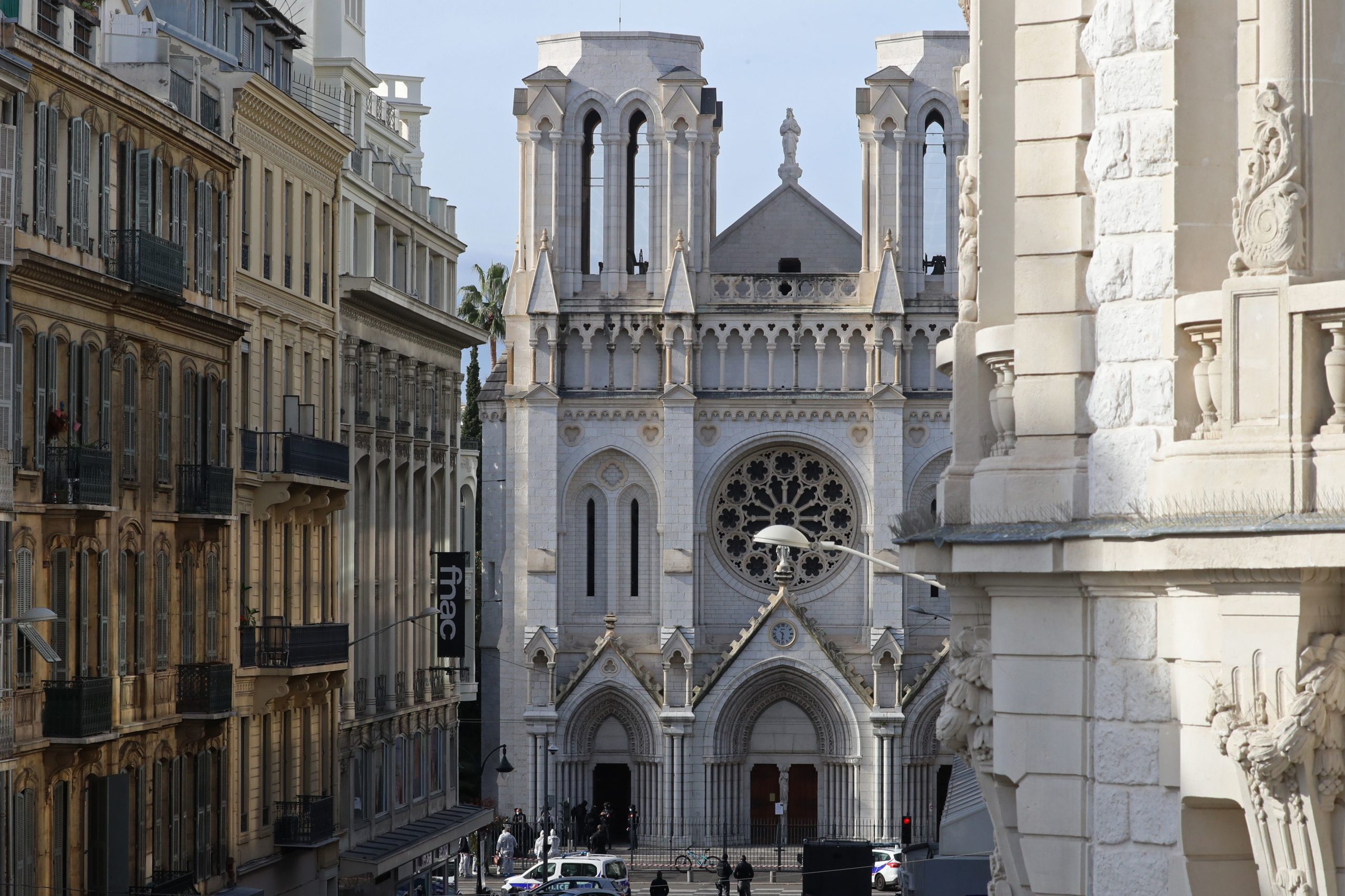 French members of the elite tactical police unit RAID enter to search the Basilica of Notre-Dame de Nice as forensics officers wait outside after a knife attack in Nice on October 29, 2020. (Photo by VALERY HACHE/AFP via Getty Images)

Several others were wounded. The suspect was shot and detained shortly afterwards, and the killings are being investigated by France’s anti-terror prosecutors.

Two other attacks took place within hours of the attack in Nice. Police killed a man who was threatening passerby with a gun in another French city, Montfavet, while yelling “Allahu akbar,” Europe 1 reported according to Reuters. (RELATED: French Police Raid Homes Of Islamic Radicals, Interview Nearly 80 People Who Posted Messages Supporting Decapitation Of Teacher)

A Saudi man was arrested in Saudi Arabia after attacking a guard at the French consulate in Jeddah with a knife. The French Embassy said the guard was hospitalized and his life is not in danger from the injuries, Reuters reported.

“Enough is enough,” Estrosi said, according to Reuters. “It’s time now for France to exonerate itself from the laws of peace in order to definitively wipe out Islamo-fascism from our territory.”

Police have not suggested a motive for the attack, according to the BBC. However, the incidents in France and Saudi Arabia come as Muslim-majority countries have protested President Emmanuel Macron’s defense of freedom of speech, specifically the freedom to publish cartoons that depict the Prophet Muhammad.

Nice terror attack: ‘Woman beheaded inside church’ as three dead in knife attack frenzy and several injured.
Incident occurred at around 9am near the Notre-Dame church in Nice, France.
The attacker kept shouting “Allahu Akbar” (God is Greatest) even after arrest.#Nice #France pic.twitter.com/ls3AX8V9KO

The attack comes roughly two weeks after Samuel Paty, a teacher, was beheaded in what is being investigated as an act of terrorism. Paty was reportedly targeted after showing students the caricatures of the Prophet Muhammad, published by the Charlie Hebdo satire magazine in 2015, during a lesson on freedom of speech. The suspected attacker, 18-year-old Chechen refugee Abdoullakh Aboutezidovitch, allegedly said he wanted to punish Paty for showing students the cartoons, according to Reuters.

Widespread protests have taken place across the Muslim world in response to the French government’s actions since the beheading, with Turkish leader Recep Tayyip Erdogan spearheading criticisms of Macron. The Turkish dictator has called for a boycott of French goods and recently said that Macron “needs some sort of mental treatment”, an insult which prompted Paris to recall their ambassador from Turkey.

France has warned its people to be cautious when travelling in Muslim-majority countries and to avoid large gatherings or protests due to heightened safety concerns. As far as the Turkish government’s verbal and legal attacks against Charlie Hebdo, a French government spokesman said Wednesday that they were “hateful”, per Reuters. 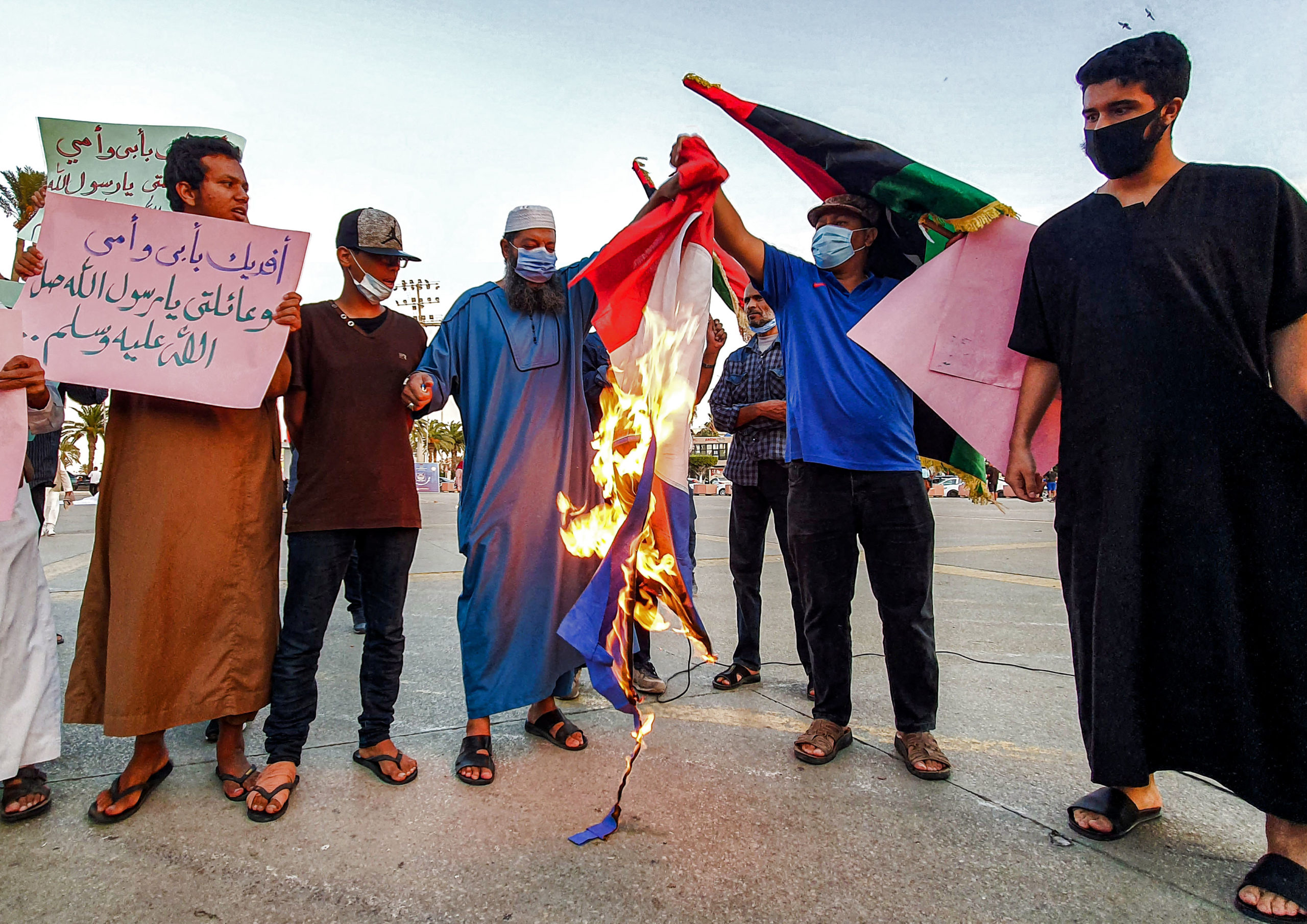 Demonstrators set fire to a French national flag during a rally protesting against the comments of French President Emmanuel Macron over Prophet Mohammed cartoons, at the Martyrs’ Square of Libya’s capital Tripoli on October 25, 2020. (Photo by MAHMUD TURKIA/AFP via Getty Images)

Nice was previously targeted by a 31-year-old Tunisian in 2016, who drove a truck into crowds celebrating Bastille Day, killing 86 people. Only days after the attack, Father Jacques Hamel, a priest, had his throat slit during Mass at a church in Rouen by two Muslim extremists who pledged their allegiance to ISIS, according to the BBC.

Macron is expected to travel to Nice Friday and has reportedly opened a “crisis cell following the events,” France’s Interior Minister said, according to ABC.