Former Vice President Joe Biden has defeated President Donald Trump and will be the next president of the United States, the Associated Press, Fox News, and other media outlets projected Friday, even as Trump is engaged in numerous legal battles to contest the result.

Biden secured projected wins in both Nevada and Pennsylvania Saturday morning, putting him well above the 270 electoral college vote threshold necessary for winning the presidency.

The Associated Press declares Joe Biden the winner of a grueling campaign for the American presidency. He will lead a polarized nation through a historic collision of health, economic and social crises. #APracecall pic.twitter.com/lInwqjX3PB

Biden will be the oldest man ever elected to the presidency, and Vice President-elect Kamala Harris will be the first African American, Indian American, and woman to serve as vice president.

“I am honored and humbled by the trust the American people have placed in me and in Vice President-elect Harris,” Biden said in a statement released by his campaign shortly after the calls were made. “In the face of unprecedented obstacles, a record number of Americans voted. Proving once again, that democracy beats deep in the heart of America.”

“With the campaign over, it’s time to put the anger and the harsh rhetoric behind us and come together as a nation,” he continued. “It’s time for America to unite. And to heal. We are the United States of America. And there’s nothing we can’t do, if we do it together.”

America, I’m honored that you have chosen me to lead our great country.

The work ahead of us will be hard, but I promise you this: I will be a President for all Americans — whether you voted for me or not.

I will keep the faith that you have placed in me. pic.twitter.com/moA9qhmjn8

Trump has not conceded and in fact claimed early Saturday to have won the election “by a lot.”

I WON THIS ELECTION, BY A LOT!

Trump — who reportedly discovered the news while golfing in Virginia Saturday morning —  released a lengthier statement himself Saturday morning, vowing to start fighting the call in court on Monday.

“We all know why Joe Biden is rushing to falsely pose as the winner, and why his media allies are trying so hard to help him,” Trump wrote. “Legal votes decide who is president, not the news media. Beginning Monday, our campaign will start prosecuting our case in court to ensure election laws are fully upheld and the rightful winner is seated. The American People are entitled to an honest election: that means counting all legal ballots, and not counting any illegal ballots.”

Like during the 2020 Democratic presidential primary, Biden underperformed in some of the first results to be returned on Tuesday night. He failed to flip Florida, Ohio, and Texas — all touted heading into Election Day as realistic potential pickups for the Democratic ticket — but managed to break President Donald Trump’s Tuesday momentum with a contested win in Arizona, called by Fox News of all outlets.

The Trump campaign heartily protested the Arizona call, urged Fox to recant their announcement, and pressed other outlets not to follow in Fox’s stead. The Associated Press, however, also called Arizona for Biden just before 3:00 a.m. ET. (RELATED: We Spent Election Night Inside Trump’s White House Extravaganza — Here’s What It Was Like) 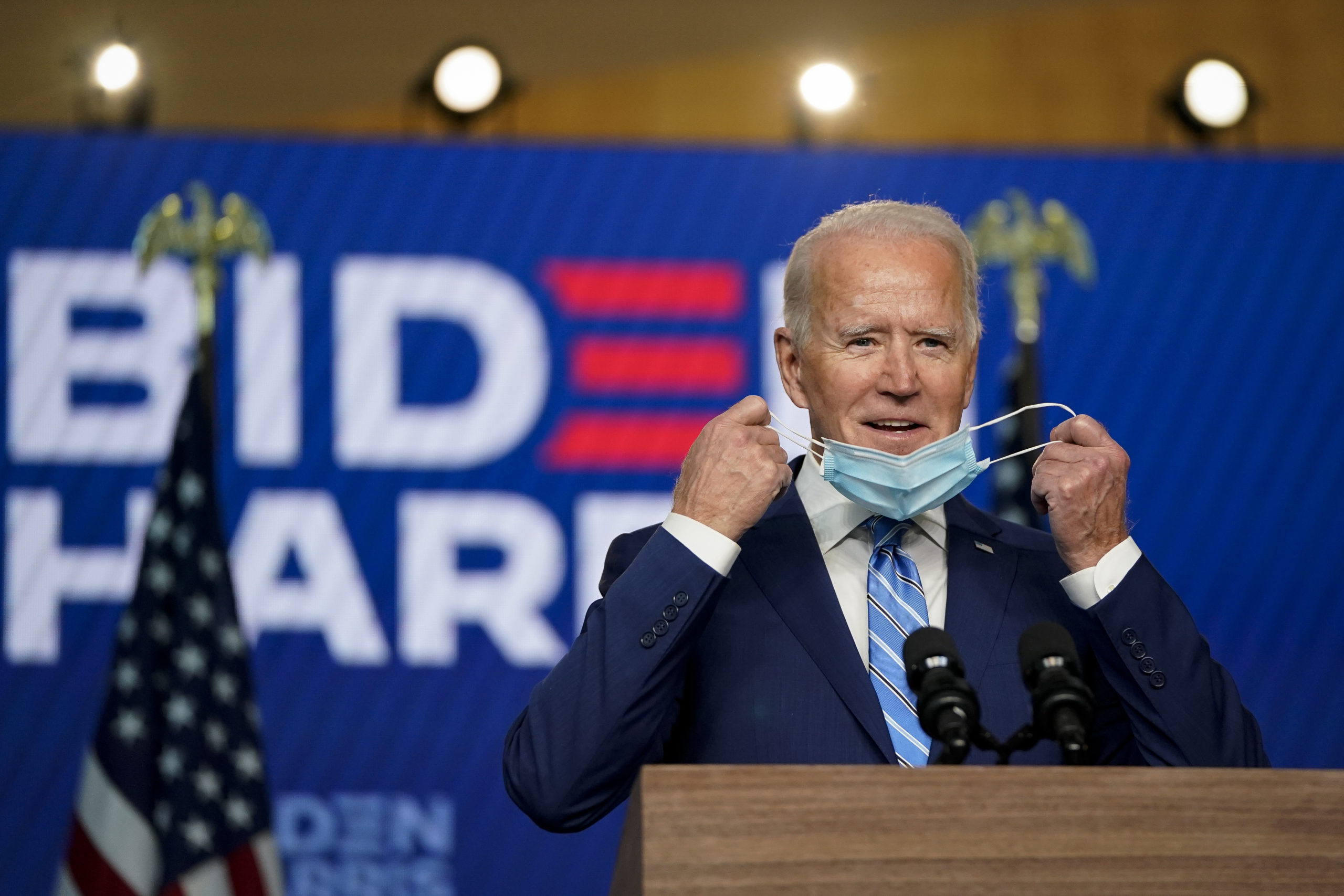 WILMINGTON, DE – NOVEMBER 04: Democratic presidential nominee Joe Biden takes his face mask off as he arrives to speak one day after Americans voted in the presidential election, on November 04, 2020 in Wilmington, Delaware. Biden spoke as votes are still being counted in his tight race against incumbent U.S. President Donald Trump which remains too close to call. (Photo by Drew Angerer/Getty Images)

Heading into Wednesday, both Biden and Trump maintained clear paths to victory, yet Biden’s wins in Michigan and Wisconsin Wednesday afternoon elevated his chances of surpassing the 270 electoral college vote threshold necessary for securing the presidency.

Biden stated in Wilmington, Delaware Wednesday that “it’s clear” he would win the election but stopped short of declaring himself the outright victory as Trump had done early Wednesday morning.

“I’m not here to declare that we have won,” he stated. “I am here to report when the count is finished, we believe we will be the winners.”

He reiterated that claim with confidence on Thursday, speaking alongside Vice President-elect Kamala Harris following a coronavirus briefing.

Trump himself has not yet conceded the race, and top economic advisor Larry Kudlow said on CNBC Friday morning that the president “intends to fight” the results.

“This election is not over. The false projection of Joe Biden as the winner is based on results in four states that are far from final. Georgia is headed for a recount, where we are confident we will find ballots improperly harvested, and where President Trump will ultimately prevail,” the statement reads. “There were many irregularities in Pennsylvania, including having election officials prevent our volunteer legal observers from having meaningful access to vote counting locations.”

This election is not over. pic.twitter.com/0WJGtgqKxX

The president’s campaign additionally took several legal steps toward staying in the race, including filing a recount motion in Wisconsin and separate lawsuits in Georgia, Michigan, Nevada, and Pennsylvania.

Three of the suits have since been resolved. The Georgia suit — which focused on Chatham County and looked to separate ballots received after the 7:00 p.m. deadline on Election Day from the total — was dismissed Thursday after the witness cited by the Trump campaign admitted to not knowing if the ballots in question had in fact been received after the deadline, despite previously stating so.

The president spent much of the days following Election Night tweeting about potential ballot fraud he claimed was occurring in those aforementioned states. Many of his messages were marked “misleading” by Twitter.

They are working hard to make up 500,000 vote advantage in Pennsylvania disappear — ASAP. Likewise, Michigan and others!