Governors and other leaders have imposed new restrictions on restaurants and bars amid an increase in coronavirus cases, but some have been caught not adhering to their own rules.

With more than 10 million cases in the U.S., states like New York are ordering bars and restaurants closed by 10 p.m., while other states are forcing establishments to operate at limited capacity. Here’s a look at how well leaders who’ve made the rules have been following them since the pandemic began.

California state guidance orders that gatherings must be made up of people of no more than three households, including for gatherings in outdoor spaces.

Democratic Gov. Gavin Newsom attended a birthday dinner for one of his political advisers on Nov. 6 that reportedly includes people from several households despite state guidance ordering otherwise, according to the San Francisco Chronicle.

Newsom has since apologized for his outing, saying in a statement that “while our family followed the restaurant’s health protocols and took safety precautions, we should have modeled better behavior and not joined the dinner,” according to the Miami Herald.

New York City bore the brunt of the pandemic during its initial waves. Despite the public health crisis that forced ‘non-essential’ businesses to shut down, including gyms, Mayor Bill de Blasio went the gym one last time in March on the day they were set to close. (RELATED: Supreme Court Justice Alito Warns Of Threats To Liberty Amid Coronavirus Pandemic)

De Blasio visited the gym March 16, their last day for business. His visit sparked backlash, with de Blasio’s office saying the mayor made the visit to keep himself “grounded.”

“The YMCA has been a huge part of his and his family’s life, like it has been for a lot of New Yorkers,” his office said in a statement. “It’s clear that’s about to change and before that, the mayor wanted to visit a place that keeps him grounded one last time.”

As Governor is announcing gyms, restaurants etc will close as of 8pm, tonight guess who is at the Park Slope Y? Statement here from @NYCMayor spokeswoman: pic.twitter.com/Cxly6g6mxF

While New York City and New York State has a mask ordinance in place, along with guidelines forcing small gatherings and maintaining social distance, de Blasio brushed the rules aside over the weekend to join in with massive crowds celebrating former Vice President Joe Biden’s projected win. He was also joined by Senate Minority Leader Chuck Schumer, who at one point took his mask off to speak to all those gathered.

1/ Remember that an updated travel advisory is in effect.

Check the graphic below for what you should be aware of when traveling. pic.twitter.com/RpnJbtEveV

However, Bowser defended her attendance at the victory speech, calling her trip “essential.”

DC Mayor Bowser says her trip to Delaware for Biden’s victory speech was “absolutely” essential: “I do a lot of things to advance the interests of the District of Columbia. And some of them are formal, and some of them are informal, but all of them are necessary.” pic.twitter.com/Xsk2psqjfD

While Democrat Chicago Mayor Lori Lightfoot said that “getting your roots done is not essential,” the mayor wasted no time getting a touch up herself in April, according to the Chicago Tribune. During a state-wide stay-at-home order, Lightfoot received a haircut, defending herself by claiming she’s the “face” of the city.

“I’m the public face of this city,” she said, according to NBC News. “I’m on national media and I’m out in the public eye.”

Lightfoot announced Nov. 12 that people should cancel their Thanksgiving plans because of the recent spike in coronavirus cases. However, she was seen this past weekend celebrating with a large crowd of people after Biden was named president-elect.

Lightfoot defended herself saying that the “crowd was gathered whether I was there or not.”

Chicago Mayor @LoriLightfoot defends celebrating with a large crowd when the media called the race for Biden despite her own rules about mass gatherings:

“That crowd was gathered whether I was there or not.”
pic.twitter.com/uq4o4yCoDc

Speaker Of The House Nancy Pelosi

San Francisco salons closed down in March due to the pandemic and were allowed to reopen in September for outdoor services only.

That didn’t stop Speaker of the House Nancy Pelosi from breaking the rules in her own district. Pelosi visited eSalon Aug. 31 for an indoor appointment, Fox News reported.

Security footage shows Pelosi walking through the salon with her face mask hanging down around her neck, leaving her nose and mouth exposed.

Democratic Philadelphia Mayor Jim Kenney was spotted eating in a restaurant in Maryland back in August without a mask, according to the Philadelphia Inquirer. While Kenney enjoyed indoor dining, his Philadelphia constituents were prohibited to dine indoors until Sept. 8.

Deana Gamble, a spokesperson for Kenney, told the Daily Caller News Foundation that the restaurant was owned by a friend and he stopped on his way back to Philly.

“Throughout the pandemic, the Mayor has consistently deferred to the guidance of the Health Commissioner, who in this case felt strongly about waiting until Sept. 8 to resume indoor dining,” Gamble said, noting Kenney understands “the frustrations of local restaurant owners who have been hit the hardest by the pandemic” but that the county in which Kenney dined in did not have a lot of coronavirus cases.

While Virginia does not mandate face masks be worn outdoors, Democratic Gov. Ralph Northam made waves when he was seen reviewing security at Virginia Beach without a face mask, according to NBC 12.

Northam’s office said the Governor was “not expecting to be within six feet of anyone.”

On June 1, Los Angeles issued a stay-at-home order. However, Democratic Los Angeles Mayor Eric Garcetti took to the streets just one day later to take a knee outside police headquarters in a show of solidarity with those protesting the death of George Floyd.

“I hear you. I hear what you are saying about the police,” Garcetti told protesters, according to Fox News.

Democratic Illinois Gov. J.B. Pritzker gathered with protesters in Chicago to commemorate June 19. His decision came despite guidance from the city of Chicago mandating that any social gatherings be limited to less than 10 persons, per NBC Chicago. 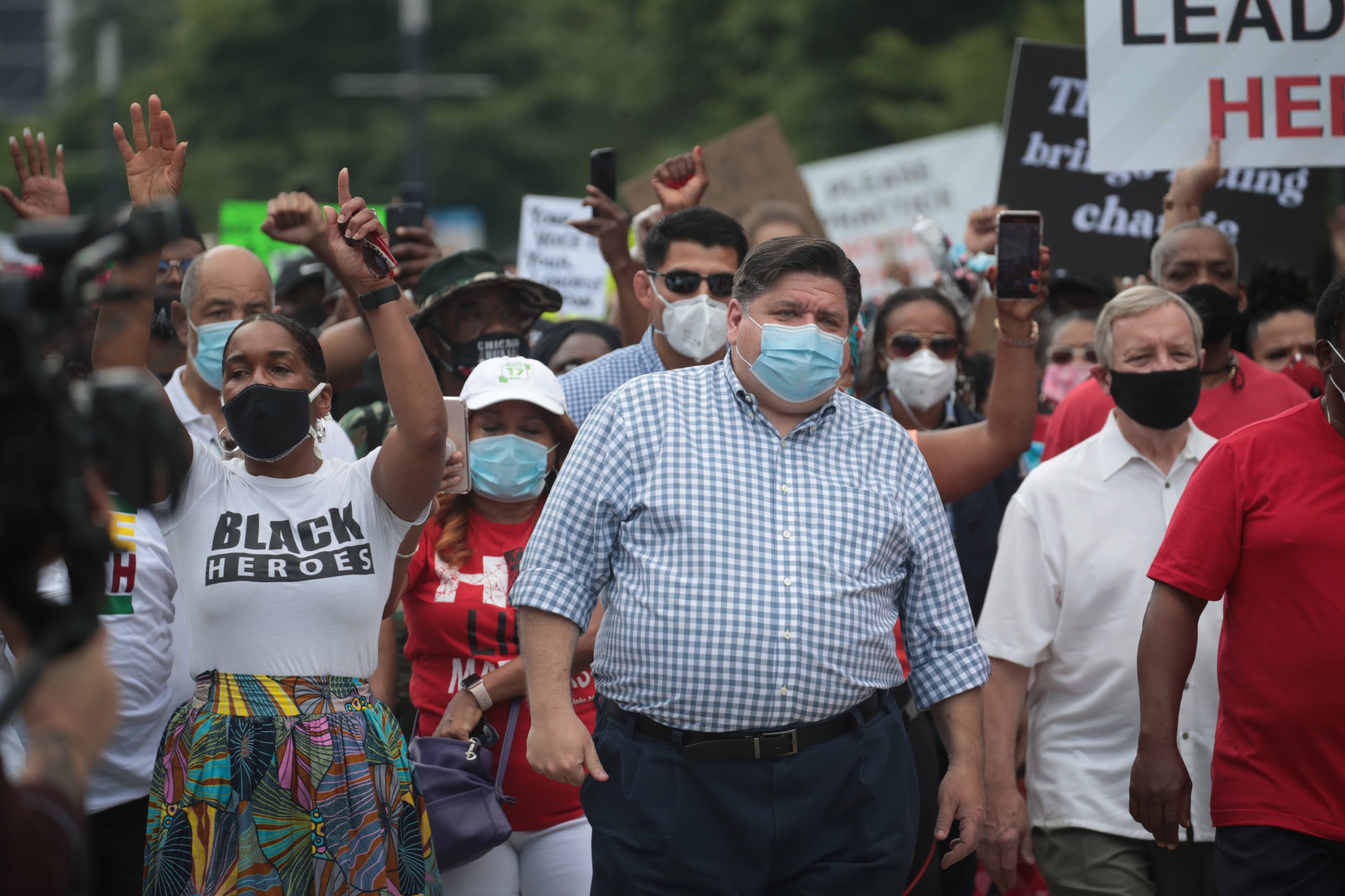