Hunter Biden called his father, President-elect Joe Biden, and his Chinese business partner “office mates” in a Sept. 21, 2017, email to the general manager of his former Washington, D.C. office building.

“[P]lease have keys made available for new office mates,” Hunter Biden wrote in the email before listing Joe Biden, his stepmother Jill Biden, his uncle Jim Biden and Gongwen Dong, who he identified as the “emissary” for the chairman of the now-bankrupt Chinese energy conglomerate CEFC.

Hunter Biden also requested that a sign be made for his office stating “The Biden Foundation” and “Hudson West (CEFC US).”

Hunter Biden’s dealings with CEFC in 2017 were at the center of allegations from his ex-business partner, Tony Bobulinksi, who said in October that Joe Biden was “plainly familiar” with his family’s business dealings in China. Bobulinski was one of the recipients of the much-publicized May 2017 email purportedly referencing Joe Biden as the “big guy” who would hold 10% in a joint-venture deal with Hunter Biden and CEFC. 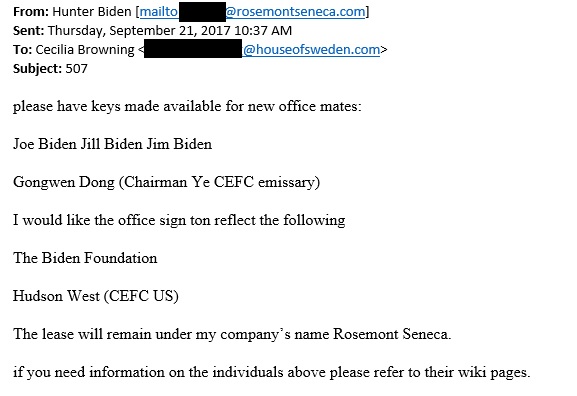 Hunter Biden revealed this week that he has been notified that federal prosecutors in Delaware are investigating his “tax affairs.” Multiple news outlets have reported that the probe is also focused on Biden’s foreign business activities, including with CEFC, which was China’s fourth-largest energy conglomerate before going out of business.

Cecilia Browning, the general manager of the office building, the House of Sweden, responded to Hunter Biden’s request, saying she was “very excited and honored to welcome your new colleagues!” 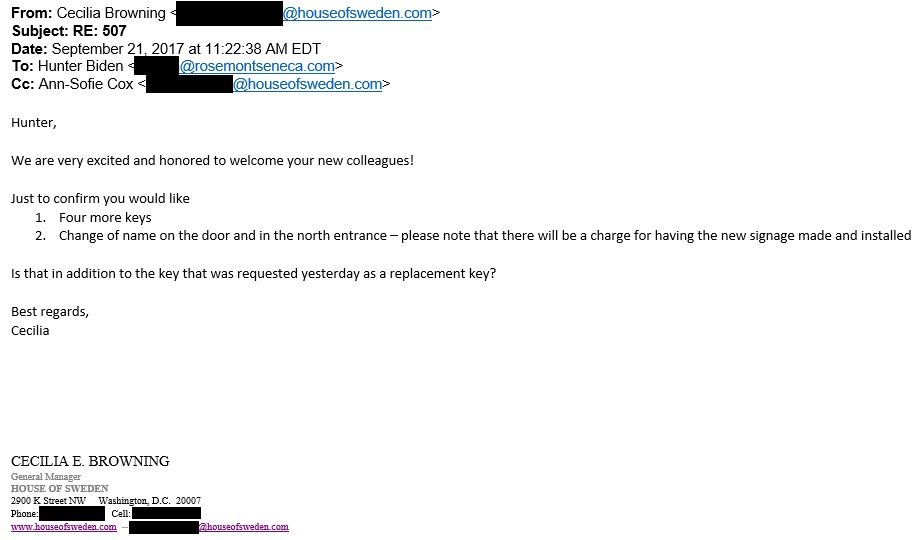 Browning declined to comment on the emails when reached by phone on Friday. She did not dispute their authenticity after the Daily Caller News Foundation forwarded them to her for her review.

“We have tenants who rent office space, and it is correct that Rosemont Seneca LLC rented an office at House of Sweden between February 2017 — February 2018,” Browning told the DCNF in an email when asked whether the emails were authentic. “However, please note that we do not share information about current and previous tenants.”

Joe Biden’s campaign spokesman, Andrew Bates, said in October that the former vice president “has never even considered being involved in business with his family, nor in any overseas business whatsoever. He has never held stock in any such business arrangements nor has any family member or any other person ever held stock for him.”

While it’s unknown whether Joe Biden ever visited his son’s D.C. office, Hunter Biden’s request that his father be granted access to the suite raises questions about the extent of his knowledge of his family’s Chinese business dealings in 2017.

Neither the Biden transition team nor Hunter Biden’s lawyer, George Mesires, did not respond to multiple requests for comment.

In his email to Browning, Hunter Biden provided the personal cell phone numbers for his father and uncle, and suggested that Browning’s associate call them “if she insists.”

CEFC had wired $5 million to Hunter Biden’s company, Hudson West III, less than two months prior to Hunter Biden’s request to Browning that office keys be made for his father and the CEFC emissary, according to a Senate committee report released in September.

Starting on the day CEFC wired the funds to Hunter Biden’s company in August 2017 through September 2018, Hudson West sent a total of $4.79 million to Hunter Biden’s law firm, Owasco, for consulting fees, according to the report.

Also between August 2017 and August 2018, Owasco wired a total of $1.4 million to James Biden’s consulting firm, the Lion Hall Group, according to the Senate report. Those transactions were also flagged for potential criminal financial activity.

Ho was arrested in November 2017 and later convicted on charges that he violated the Foreign Corrupt Practices Act (FCPA) by paying bribes to top officials in Uganda and Chad for oil rights in those countries.

CEFC paid Hunter Biden $1 million to represent Ho, who was sentenced to 30 months in prison for the scheme.

It is unclear what legal services Biden provided Ho. He is not listed as an attorney on any of Ho’s court filings.

Federal prosecutors revealed that the FBI obtained warrants against Ho under the Foreign Intelligence Surveillance Act (FISA) on the belief that he was operating as an agent of a foreign country, court documents show.

Hunter Biden expressed concerns in May 2017 that a partnership with CEFC China Energy might run afoul of FCPA and the Foreign Agents Registration Act (FARA).

“We don’t want to have to register as foreign agents under the FCPA which is much more expansive than people who should know choose not to know,” Biden wrote to Bobulinski on May 1, 2017, according to a message obtained by the DCNF.

“No matter what it will need to be a US company at some level in order for us to make bids on federal and state funded projects,” he continued.

Hunter Biden also provided Browning, the House of Sweden general manager, contact information for Gongwen Dong and Mervyn Yan, who were partners in his dealings with CEFC. He also identified Ye Jianming as one of his partners and provided a biography listing his affiliation with CEFC.

Dong and Yan did not respond to emails seeking comment.

In the September report, Republicans expressed concerns about Biden’s dealings with Ye and CEFC. The report said Ye served from 2003 to 2005 as deputy secretary general of the China Association for International Friendly Contacts (CAIFC).

According to an Aug. 24, 2018, report from the U.S.-China Security and Economic Review Commission, CAIFC serves as a front group for the People’s Liberation Army and “performs dual roles of intelligence collection and conducting propaganda and perception management campaigns.”

Hunter Biden’s email to Browning was located on a copy of Hunter Biden’s alleged laptop that former New York Mayor Rudy Giuliani provided to the DCNF in October. Hunter Biden has not denied dropping off his laptop in April 2019 with a Delaware-based computer repair shop.

Thee owner of the shop is said to have provided it to Giuliani after Hunter Biden failed to retrieve it when services were completed.

Hunter Biden terminated his lease with House of Sweden in February 2018, according to an email that Hunter Biden received from Browning the month prior. That message was also located on the hard drive.