Netflix’s popular Tiger King stars have been ordered by the Department of Justice (DOJ) to relinquish their big cat cubs after they were accused of violating the Endangered Species Act and the Animal Welfare Act.

The DOJ has ordered Jeffrey and Lauren Lowe to “immediately surrender all Big Cat cubs under the age of one year and their mothers to the government.”

“The Lowes have showed a shocking disregard for both the health and welfare of their animals, as well as the law,” Acting Assistant Attorney General Jonathan D. Brightbill of the Justice Department’s Environment and Natural Resources Division said.

The Lowes took ownership of Greater Wynnewood Exotic Animal Park LLC and Tiger King LLC after Joseph Maldonado-Passage, better known as Joe Exotic, was sentenced to 22 years in prison, according to The Hill. Exotic was convicted of trying to hire a hit man to kill Carole Baskin, who owned Big Cat Rescue in Florida. 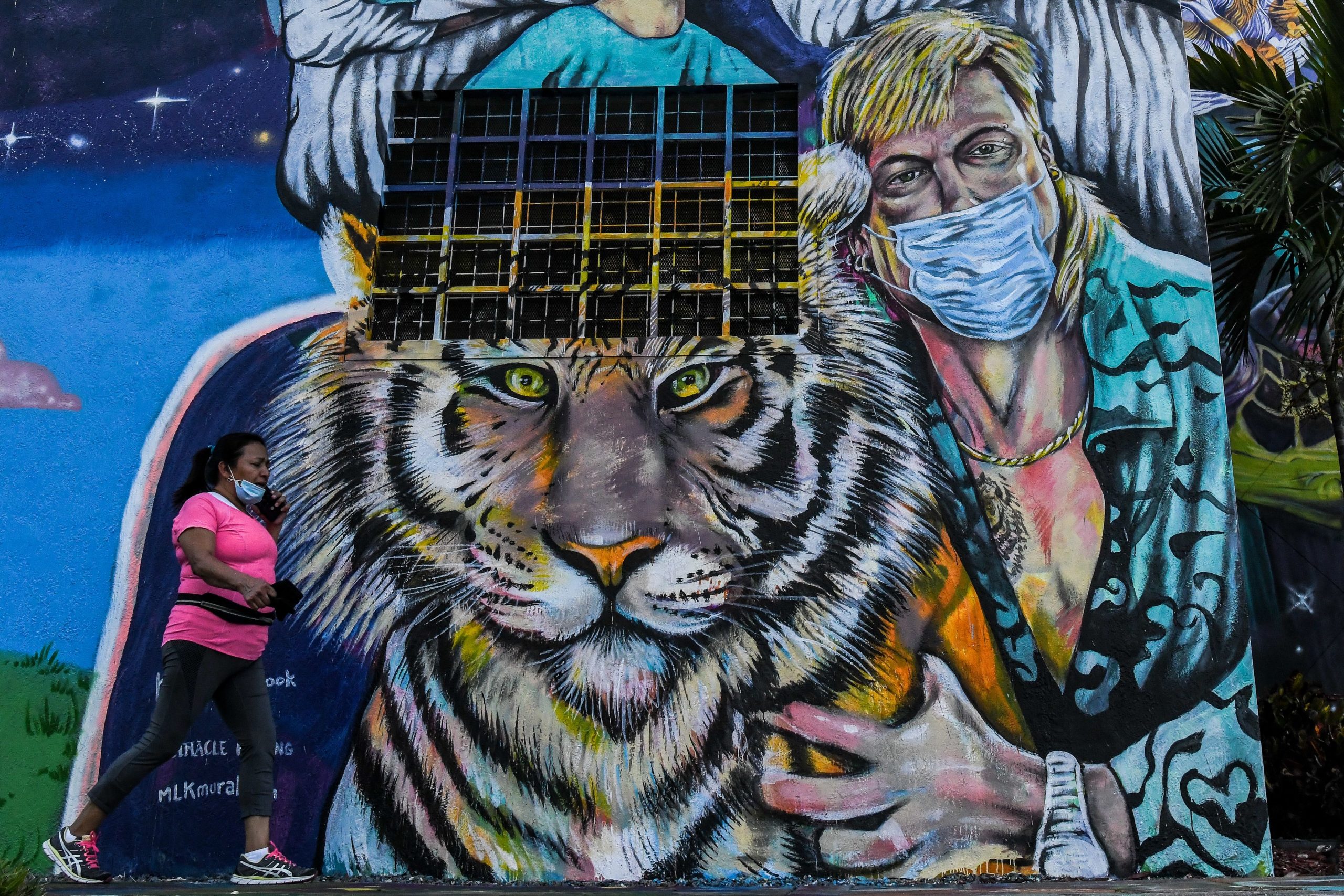 A woman walks past a mural by US muralist Kyle Holbrook with health workers and Joseph “Joe Exotic” Maldonado-Passage (R, below) wearing a mask in Wynwood Art District in Miami, Florida on June 29, 2020. (CHANDAN KHANNA/AFP via Getty Images)

The DOJ found that the Lowes failed to provide “safe conditions, proper nutrition” and veterinary care to some of their animals, which the court said indicated the remaining animals were at risk of harm and violated the Endangered Species Act. The court also said that failing to provide adequate veterinary care placed the animals in “serious danger” and violated the Animal Welfare Act.

“This decision sends a clear message to both licensed and unlicensed exhibitors of the Animal Welfare Act’s reach,” USDA Acting General Counsel Tyler S. Clarkson said. “USDA looks forward to continuing its close partnership with the Justice Department to litigate these cases and enforce the Animal Welfare Act.”

The DOJ filed a suit against the Lowes, Greater Wynnewood Exotic Animal Park LLC and Tiger King LLC in June. Animals were deprived of food with some underweight and suffering from nutritional deficiencies, according to the DOJ. Some animals were allegedly unable to walk or stand due to the lack of nutrition. (RELATED: Zoo Featured In ‘Tiger King’ Searched By Police After Human Remains Believed To Be On Property)

One lion cub, Nala, was “lethargic, depressed, thin and would not get up out of the mud even after prompting,” the DOJ alleged. There was also discharge coming from her nose and eyes and she had sores on her ears.

A veterinarian diagnosed Nala with an upper respiratory infection, dehydration, a urinary tract infection and was suffering from parasites and fleas, according to the DOJ. Nala was also diagnosed with malnutrition and had severe vitamin deficiencies that caused a chronic bone fracture and lameness, the DOJ alleged. Nala was transferred to a wildlife sanctuary in Colorado in September.