Before the coronavirus pandemic, President Donald Trump beat some experts’ economic expectations and pursued policies that kicked the American economy into gear.

During Trump’s four-year tenure as president, the American economy saw levels of growth and employment that beat the expectations of some economic experts in academia and government. Trump’s tax cuts, deregulation, and other economic policies helped business confidence soar, and led to larger disposable incomes for America’s poor and middle class before the coronavirus pandemic.

Based on then-candidate Trump’s policy proposals during the 2016 campaign, economic optimism quickly set in before Trump was inaugurated. The Organization for Economic Co-operation and Development’s (OECD) Business Confidence Index quickly saw business confidence in the United States shoot up to match Obama-era highs. The National Federation of Independent Business (NFIB) Small Business Optimism Index, which hit just over 100 only one time before during the Obama years, increased 10 points to nearly reach 106 in December 2016. 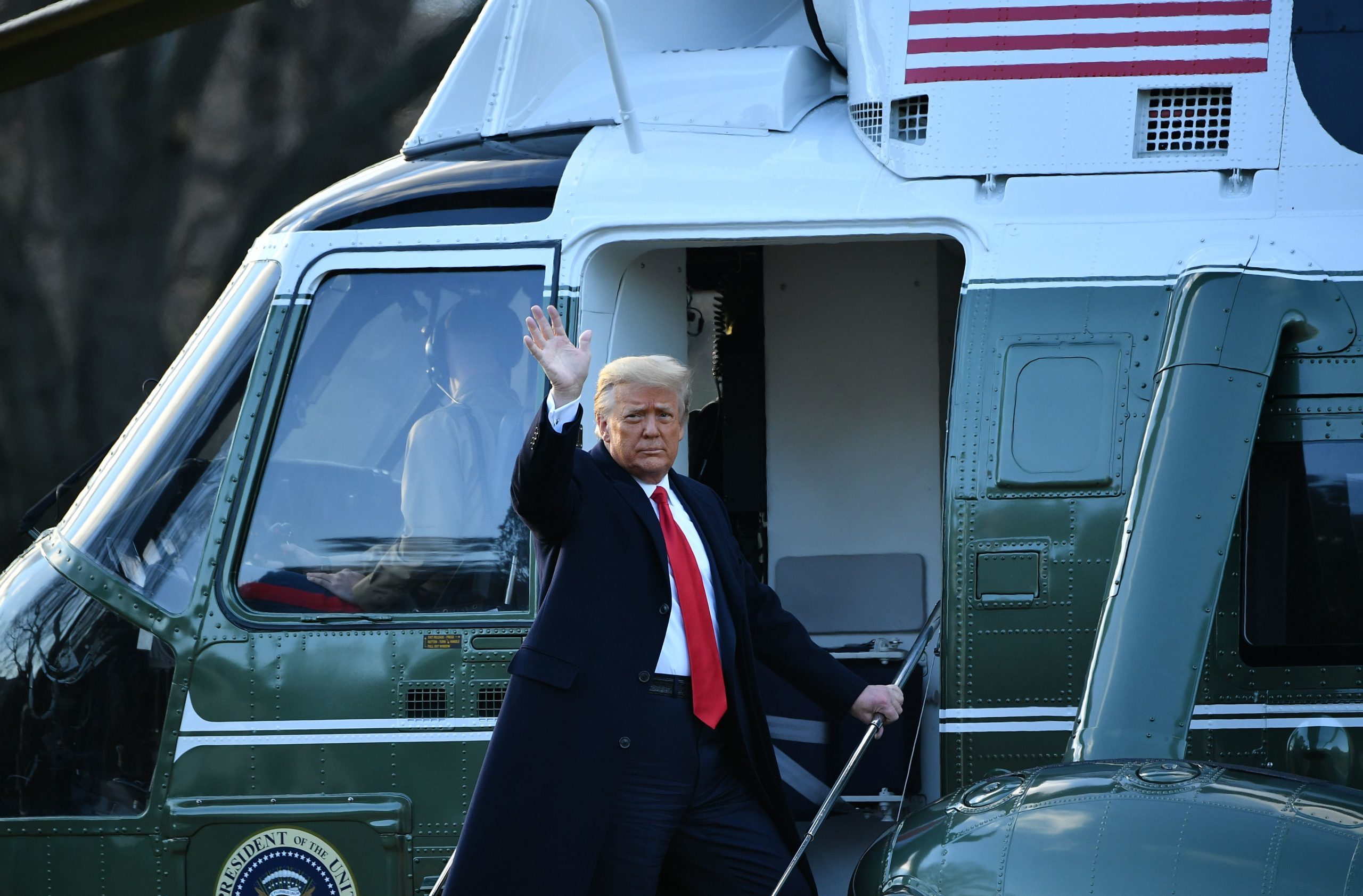 Outgoing US President Donald Trump waves as he boards Marine One at the White House in Washington, DC, on January 20, 2021. (Photo by MANDEL NGAN/AFP via Getty Images)

Because Trump followed through on his promises to cut taxes for the middle class, make our corporate tax rate competitive, and scrap economically significant regulations, Trump’s economy maintained a high NFIB Small Business Optimism score, which peaked at a record of over 108.5 in August of 2018.

The Trump Administration’s first budget in 2017 projected that Trump economic policies would increase the growth rate of GDP to 3% annually by the end of his first term, as reported by NPR. The American economy hit 3.1% real GDP growth two years early in 2018, according to the Bureau of Economic Analysis. In Trump’s first three years in office, real GDP growth averaged 2.5%, a quarter of a percent better than Obama’s average growth rate of 2.25%, as noted by the Wall Street Journal.

When Trump was elected in November 2016, Federal Reserve economists believed the American economy was operating at full employment. The unemployment rate of 4.7%, they believed, was near the country’s natural level of unemployment, which they projected to be around 4.5%, as noted by Wall Street Journal Editor Jon Hilsenrath in an opinion piece. However, the unemployment rate hit 3.5% in September 2019, the Wall Street Journal reported. (RELATED: Trump’s Chaotic Exit Shouldn’t Distract From His Real Presidential Legacy)

Trump economic boom helped American workers experience real wage growth at levels not seen since the Reagan years. Wage growth was 3.4% per year adjusting for inflation for workers making around the national average in Trump’s first three years, the American Enterprise Institute (AEI) noted. At times wage growth was even higher. From May 2018 to May 2019, the Atlanta Federal Reserve’s Growth Tracker found real wages increased 3.7% on average. AEI’s research also showed that workers in the bottom half of the income distribution saw their wages increase by percentage more than the upper half.

Across education levels, wages increased. The largest increase being for workers with less than a high school diploma, who saw a 12% increase in wages, according to the Wall Street Journal.

These positive trends were also evident across racial demographic groups, and helped get American families off of government programs. Poverty among Asians dropped 28%, Hispanics 19%, whites 17%, and blacks 15% from 2016 to 2019, economists John F. Cogan and John B. Taylor wrote in an opinion for the Wall Street Journal. Black workers’ median weekly full-time earnings increased 19% during the first three years of the Trump administration to $806, eight points higher than Obama’s 11% growth rate for black workers during the great recession recovery, the Wall Street Journal Editorial Board noted. The number of Americans on food stamps and federal disability dropped 10% and 6%, respectively.

Near the end of 2019, the United States’ poverty rate was the lowest it has been since the Clinton administration at 11.8%, according to the United States Census Bureau. It then decreased further to 10.5% in 2019.