The SBA released heavily redacted emails between the agency, lenders and Planned Parenthood affiliates in response to a Freedom of Information Act request the DCNF filed in May 2020. GOP lawmakers had previously demanded an investigation into $80 million in Paycheck Protection Program (PPP) loans, saying they were obtained illegally.

The SBA has repeatedly declined to comment on the Republicans’ claims. (RELATED: Rubio Asks SBA To Investigate How Planned Parenthood Got $80 Million In Coronavirus Loans)

“Americans have a right to know why their tax dollars went to Planned Parenthood’s abortion clinics instead of struggling small businesses, non-profits, and churches,” Sen. Tom Cotton told the DCNF.

“The Small Business Administration ought to disclose how Planned Parenthood affiliates gamed the system to illegally receive PPP loans—and then refer those affiliates to the Department of Justice for prosecution,” the Arkansas Republican continued.

The redacted communications appear to discuss Republican concerns over the PPP loans as well as a letter from GOP lawmakers demanding investigations into whether the loans were illegally distributed.

Due to the redactions, it is not clear what the SBA decided or how the SBA rationalized its decision. However, one May 18, 2020 email from an SBA employee to a Sun Trust email address said that the SBA did not have the ability to make a final determination on eligibility as “these decisions are the responsibility of the applicant and the lender.”

The email noted that an unnamed applicant met the needed 501(c)(3) criteria.

“If other eligibility criteria is met then the submission may be eligible,” the email said. 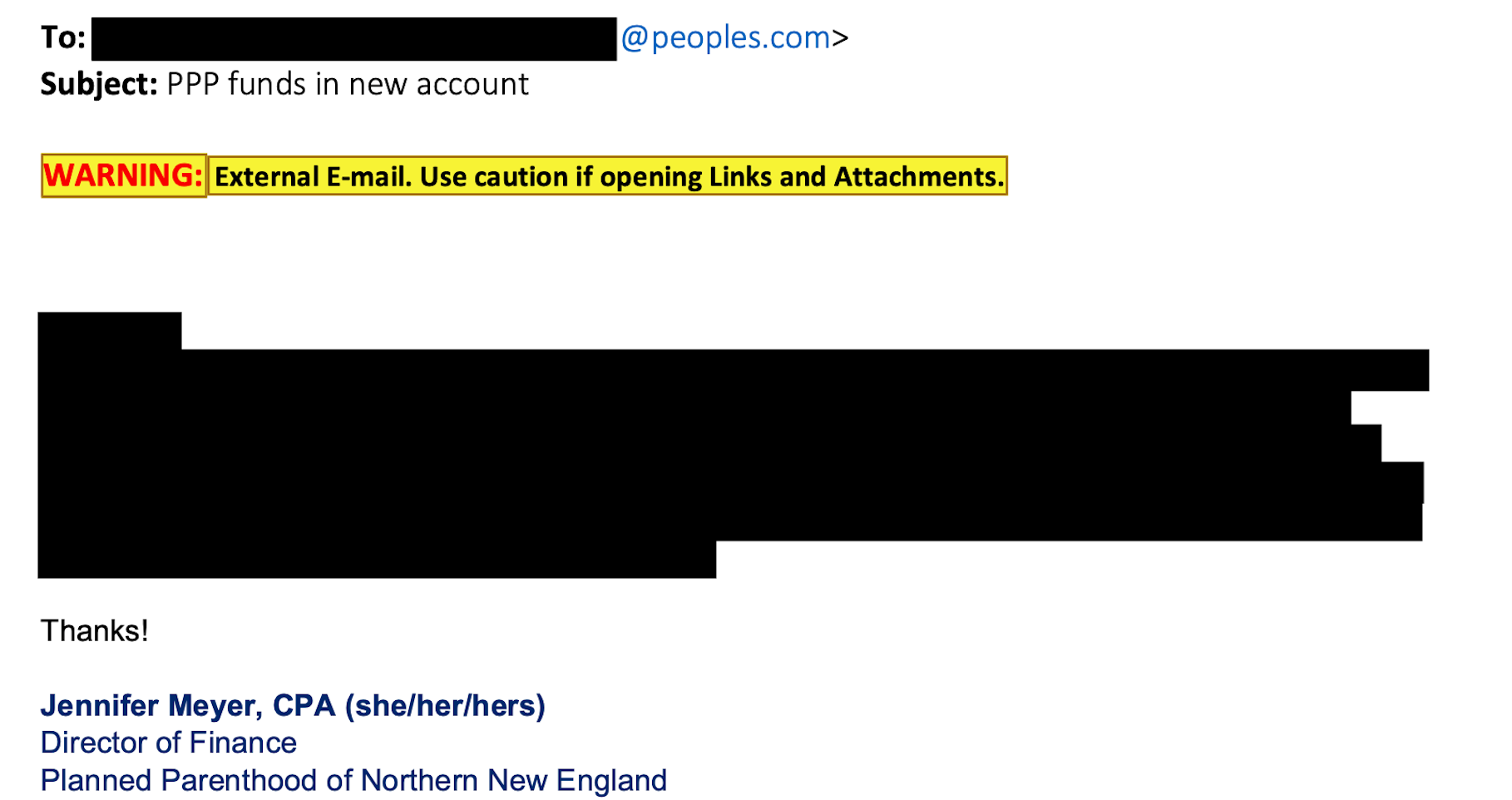 SBA spokeswoman Megan Moore told the DCNF that Meyer’s name was “inadvertently released” but that SBA cannot release the information of applicants who “did not ultimately receive a loan.”

Planned Parenthood of Northern New England did, however, receive a PPP loan of $2.72 million on April 5, 2020, federal records show. The affiliate did not immediately respond to a request for comment.

When the DCNF pressed Moore to explain the discrepancy, she acknowledged that her previous statement that Planned Parenthood of Northern New England did not receive a loan was false but said that prior discussions of the Planned Parenthood affiliate’s eligibility cannot be released.

The DCNF reminded Moore that the redacted communications were sent after the loan was issued, not before, but Moore insisted that “questions regarding eligibility may be raised at any time regardless of loan approval date.”

“The bill gives the Small Business Administration broad discretion to exclude Planned Parenthood affiliates and other non-profits serving people with low incomes and deny them benefits under the new small business loan program,” the statement said.

“These circumstances require a full investigation in order to determine whether there was wrongdoing, and we urge that any such misconduct be prosecuted to the fullest extent of the law,” the lawmakers said in a May 2020 letter.

Since May, SBA has repeatedly refused to discuss the matter to the DCNF. SBA repeatedly told the DCNF that it does not “comment on individual borrowers.”

“Planned Parenthood affiliates are well aware that they are ineligible to receive PPP loans, on the basis of SBA’s letters and the frank admission of their political action committee,” senators wrote in the January letter to Carranza. “Their attempts to apply for PPP loans are naked attempts to defraud the United States government.”

Cotton and his fellow senators emphasized that Planned Parenthood employs approximately 16,000 people across the nation and “jealously exercises control over local affiliates, subjecting them to uniform bylaws, accreditation, frequent reviews, and mandates about what services they must provide to remain part of the Federation, such as onsite abortion.”

“Nonetheless, at least 37 Planned Parenthood affiliates illegally obtained more than $80 million in taxpayer funds during the initial rounds of PPP by self certifying their eligibility for the program,” the senators wrot in their letter. “In response, the SBA determined that these affiliates were ineligible to receive PPP loans and issued letters informing them of the consequences of false certifications of eligibility, including repayment of loans, loss of loan forgiveness, and other civil and criminal penalties.”

Planned Parenthood did not respond to requests for comment from the DCNF for this story.