Brown went mega-viral over the past few days after a video surfaced of a bar altercation with the Oklahoma receiver. In the video, Brown and his brother dish out one of the most lopsided beatings we’ve seen in recent memory. It’s also clear that something occurred prior to the filming starting, and in a statement through his attorney, Brown is alleging he was attacked first. (RELATED: David Hookstead Is The True King In The North When It Comes To College Football)

Was it really power hour if you didn’t get in a fight on the piss-soaked bathroom floor? pic.twitter.com/lWombEtc3g

Walker’s attorney Steve Stice stated the following in a statement given to me:

What is not shown is the original assault and battery suffered by Mr. Walker at the hands of Mr. Jones and his friend shortly before the captured footage. As can be seen, my client’s nose and clothing were bloodied prior to the beginning of the video. Mr. Walker was legally justified in defending himself in this matter. As a result, Mr. Walker received several injuries including a torn bicep which will require surgery.

You can read the full statement below. 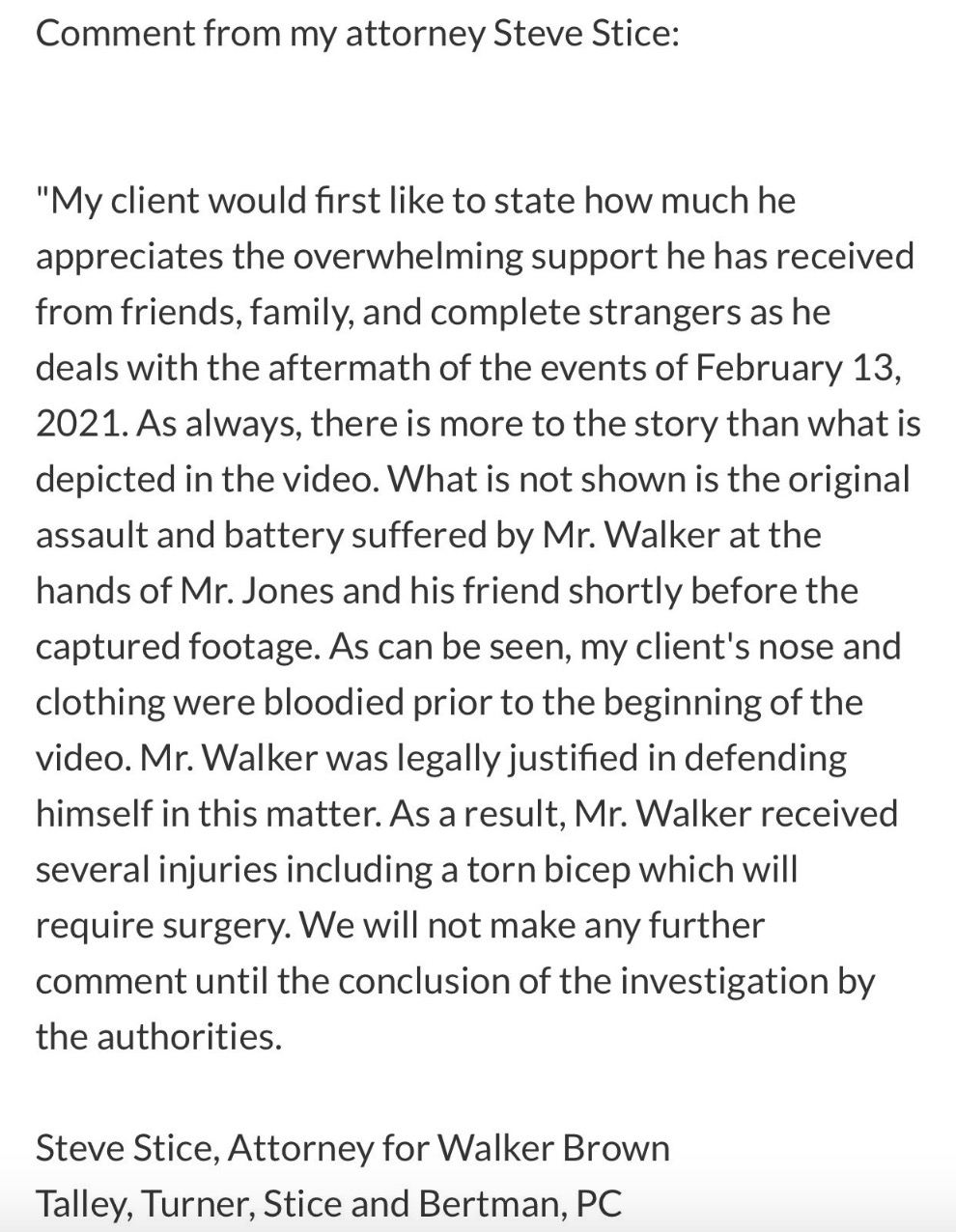 This statement from Brown isn’t overly surprising and it’s what I expected to happen. Right when the unreal beatdown happened, his brother tweeted that they were just defending themselves and had no choice.

Just to get rid of the misconceptions, I’m the fellow in the beanie and that is my brother. We ARE NOT wrestlers at any university, we have been wrestling since we were in diapers and MMA/Cage Fighting since we were 12. They gave us no options unfortunately. We showed restraint.

While I’m not going to play judge and jury in this article, it’s obvious something occurred before the camera started rolling.

It’s also obvious that Jones and his buddy were no match for the two Brown brothers.

Thank you everyone for the support! https://t.co/l8LUDOx11k

We’ll see how it all plays out with the authorities, but the beating handed out by Walker Brown is without a doubt one of the most impressive that I’ve ever seen.

P.S.: Walker asking his brother which one he wanted might be a top-10 most badass moment I’ve ever seen in a college bar fight. Hell, it might be number one. That was straight out of a movie.