Children in the mountain village of Ayahulatempa, Mexico, who usually tend to livestock are handed firearms and dressed up like community policemen when journalists visit the area, the Associated Press reported Monday.

The children cover their faces with handkerchiefs and line up in the town’s basketball court in a display meant to draw attention to organized violence in the area, according to the AP. Most of the children are unarmed during their patrols, which many forgotten communities have resorted to in order to bring organized crime to the federal government’s attention.

“They are the poster children for a country at war that doesn’t speak of war,” Network for Children’s Rights in Mexico Director Juan Martín Pérez said, the AP reported. 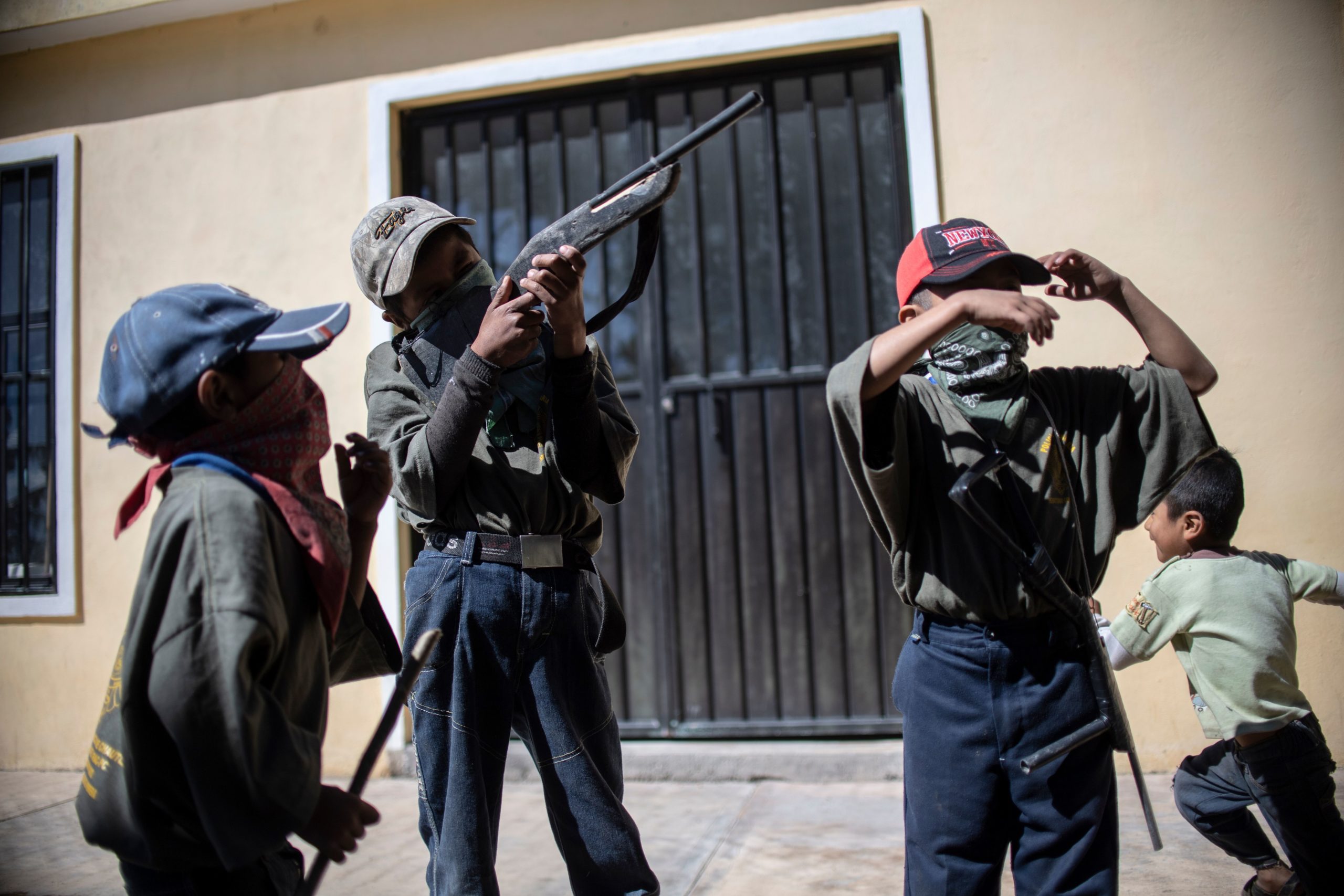 A boy aims a makeshift rifle as the Regional Coordinator of Community Authorities (CRAC-PF) community police force teaches a group of children how to use weapons, at a basketball court in the village of Ayahualtempan, Guerrero State, Mexico, on January 24, 2020. (PEDRO PARDO/AFP via Getty Images)

The Ayahulatempa village is located in the remote Mexican state of Guerrero, where narcotics are produced and transported, according to the AP. Criminals reportedly target the native village and kidnap, murder and extort the locals.

The children only march with guns “when the reporters are going to come and interview us,” Valentín Toribio, 12, told the AP as he tended to goats and puppies on a mountainside with three other boys. “It’s so the president sees us and helps us,” Toribio said.

Toribio enjoyed learning how to use a gun from his older brother and wants to be a policeman when he’s older, he told the AP. “When I’m older I’ll carry the gun because (now) it can be dangerous,” he told the AP.

Geovanni Martínez, Toribio’s 11-year-old cousin said he’s too busy to be interested in the demonstration, the AP reported. Instead, he likes to spend his free time playing basketball and wants to return to his school that was closed due to COVID-19.

“I take care of the goats, then I go to my pigs and then to give water to Filomena,” a donkey, Martínez told the AP. (RELATED: Mexican Agencies Won’t Help US Topple Drug Cartels, Senior DEA Official Says)

At least three of the four boys participated in the demonstration for journalists, marching and showing different firing positions, the AP reported. A few weeks prior, the display included around three dozen children marching and firing into the air while shouting against the Los Ardillos gang, also known as “the Squirrels,” that targets their community.

The community wants more National Guard troops and federal help for orphans, widows and people whose lives were uprooted because of the violence, according to the AP. Only boys are allowed to participate in the demonstration and most are related to men involved in the village’s community police force.

“We’ve normalized that these children don’t eat, are illiterate, are farm workers,” Abel Barrera, the founder of a local human rights organization called Tlachinollan, told the AP. “We’re used to the ‘Indians’ dying young, but, ‘How dare they arm them!’”