Hunter Biden reportedly referred to Asian women as “yellow” in a January 2019 text to his cousin who was asking about the type of women he preferred.

The text came from Hunter’s abandoned laptop and was revealed on Wednesday by the British newspaper Daily Mail, which also provided a screenshot of the message. 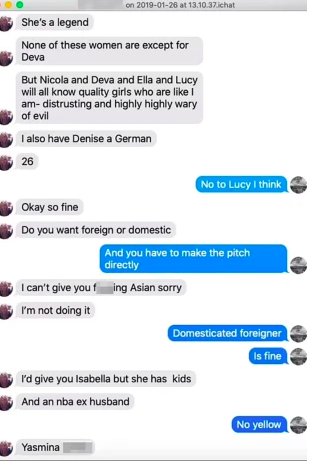 The texts reportedly show Caroline Biden, the daughter of President Joe Biden’s brother James, talking to her cousin Hunter about setting him up with her friends.

“Do you want foreign or domestic… I can’t give you f****g Asian sorry,” she reportedly said.

“Domesticated foreigner is fine,” Hunter replied before following up by saying “No yellow,” the text reportedly revealed.

The president’s son also recently came under fire after the Daily Mail revealed texts to his lawyer in which Hunter reportedly used a racial slur, which went largely ignored in establishment media.

Biden inquired about how much money he owed his lawyer, George Mesires, before reportedly texting him, “n***a you better not be charging me Hennessy rates.”

“I only love you because you’re black,” Biden allegedly said in another text and when Mesires told him it’s annoying when he interjects “with frivolity.”

Caroline Biden also has a troubled past, most recently pleading guilty in December of last year to a DUI.

Hunter Biden’s reported use of the slur comes among increased media coverage of hate crimes against Asian-Americans.

President Biden signed a law back in April instructing the DOJ to accelerate review of reported hate crimes related to COVID-19. (RELATED: Biden, Japan’s Yoshihide Condemn ‘Increase In Anti-Asian Discrimination’ In US)

“My message to all of those who are hurting is: We see you and the Congress has said, we see you. And we are committed to stop the hatred and the bias,” Biden said while signing the law.