President Joe Biden highlighted Tuesday the federal government’s plan to “literally” knock on doors in an effort to get more people vaccinated, causing at least some to worry that a new pressure campaign would descend on their communities.

The campaign, it turns out, has been happening since at least April. It also doesn’t use federal strongmen or intimidation tactics, the administration said. While the administration is targeting areas with low vaccination rates, the ground game is comprised primarily of local volunteers and some religious and evangelical groups, according to the White House.

The White House further said that the volunteers use CDC vaccination data in order to find communities with low vaccination rates, and that they do not use individual medical records.

Many on the right, including the Arizona attorney general, expressed skepticism in the wake of Biden’s comments.

“We are continuing to wind down the mass vaccination sites that did so much in the spring to rapidly vaccinate those eager to get their first and second shot. Now we need to go community by community, neighborhood by neighborhood, and oftentimes door to door, literally knocking on doors, to help get the remaining people protected from the virus,” Biden said Tuesday.

BIDEN: “We need to go community-by-community, neighborhood-by-neighborhood, and oft times door-to-door, literally knocking on doors” to get people vaccinated. pic.twitter.com/oJ2lG9bqaw

The comments sparked major backlash. Republican Texas Rep. Dan Crenshaw tweeted: “How about don’t knock on my door. You’re not my parents. You’re the government. Make the vaccine available, and let people be free to choose. Why is that concept so hard for the left?” (RELATED: Marjorie Taylor Greene Compares Biden’s Door-To-Door Vaccine Push To Nazi Storm Troopers)

Republican Colorado Rep. Lauren Boebert warned that “the government now wants to go door-to-door to convince you to get an ‘optional’ vaccine” and Arizona Attorney General Mark Brnovich sent a letter to Biden calling the move a “government intrusion into American’s health care privacy.”

“I, along with many Arizonans, was greatly alarmed by your White House indicating that it might be in possession of medical records revealing the contact information for Americans who have not been vaccinated,” Brnovich wrote. “If this is the case, this is a severe breach of privacy, and I will not tolerate such intrusions within Arizona.” 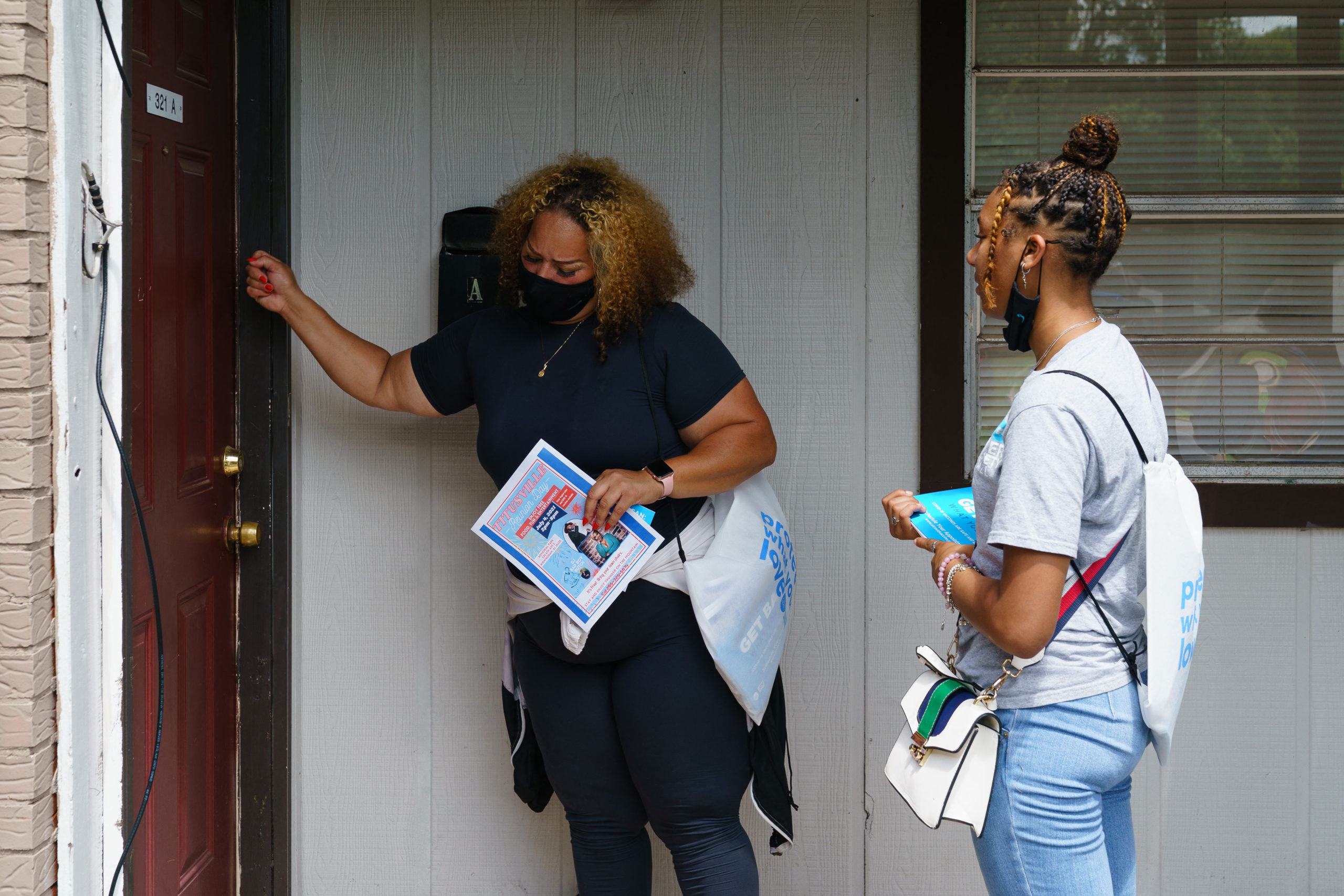 Volunteers and staffers knock on a door during an outreach effort to inform residents about an upcoming COVID-19 vaccination event, on June 30, 2021, in Birmingham, Alabama. (ELIJAH NOUVELAGE/AFP via Getty Images)

The government isn’t obtaining personal information for non-vaccinated Americans. An administration official explained to the Daily Caller that the White House doesn’t mandate vaccines – a point White House officials have repeatedly made.

While the administration doesn’t have a database on non-vaccinated individuals, it is using data from the Centers for Disease Control and Prevention (CDC) to focus on areas with low vaccination rates, the official said. This information, which tracks counties’ vaccination rates across the U.S., is publicly available on the CDC’s website.

Vaccination providers collect data on the number of COVID-19 doses administered, which is then reported to the CDC, according to the website.

“Using CDC data, we targeted areas with low vaccination rates and large ‘movable’ populations, and knocked on every door there,” the administration official said. “We also took into account other considerations, including the CDC’s SVI to ensure we were reaching some of our hardest to reach populations.  We saw movement in states where we deployed this tactic, including in Alabama, Florida, Texas and Georgia which had vaccination rates above the national average in the month of June. We plan to continue this work moving forward in the months ahead.”

This “door-to-door” vaccination effort is not a new thing, the official noted. The effort was included during Biden’s “Month of Action,” where he pushed to have 70% of adult Americans receive at least one COVID-19 dose by July 4. Biden fell short of this goal, but the administration has continued to push vaccinations for more Americans.

In fact, individuals have been going door-to-door since April when the administration launched the Community Corps, an entirely grassroots network for various communities, the official told the Caller. Many of these community groups are made up of religious and evangelical groups as well as people focused on rural communities. 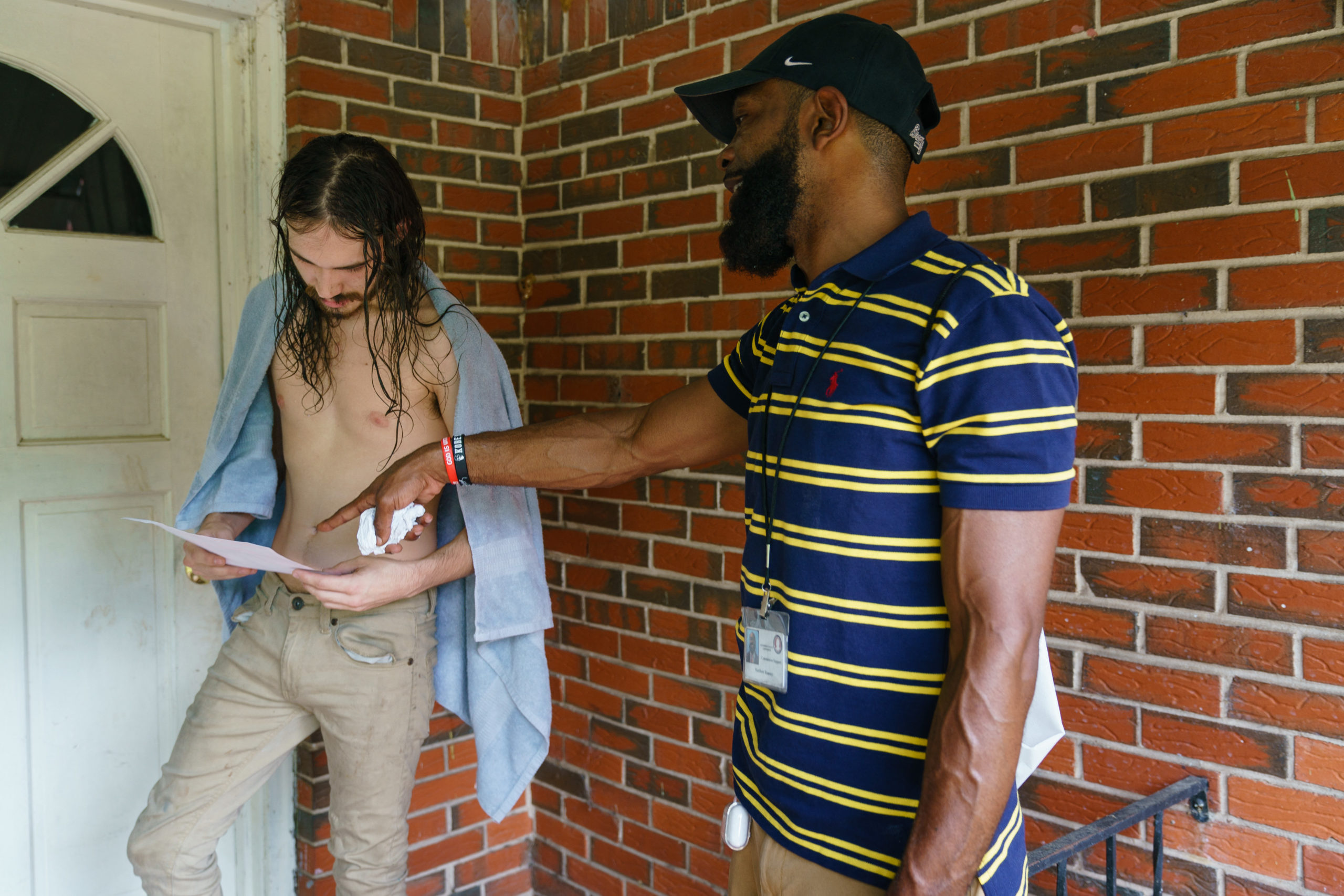 A staff member of City Councilwoman Sheila Tyson speaks to a resident during a door-knocking outreach effort to inform people about an upcoming COVID-19 vaccination event, on Wednesday, June 30, 2021, in Birmingham, Alabama. (ELIJAH NOUVELAGE/AFP via Getty Images)

“In the Month of Action, we leveraged grassroots and community voices across the country to make the case for getting vaccinated to their communities,” the administration official explained. “A key part of this effort was door to door canvasing which allowed for one on one conversations about the importance of vaccination and encouraging those who are already vaccinated to talk to their friends and family about making the same decision.”

Ultimately, the White House has remained firmly against mandating vaccines. It has, however, continued to develop ideas to promote vaccinations and reach those unsure about getting the shot – including putting together volunteers to inform people living in low-vaccination rate areas about the COVID-19 vaccine.

Editors note: This post was updated to clarify exactly how the administration targets communities with low vaccination rates.