The fall from grace of former hero of the resistance Michael Avenatti came to its conclusion Thursday after he was sentenced to 30 months in federal prison for attempting to extort Nike, reportedly breaking down in tears while giving his statement to the court.

Just several years ago, however, prominent members of corporate media were — in all seriousness — floating Avenatti as a potential presidential candidate in the 2020 election. As the attorney who represented adult film actress Stormy Daniels after she alleged having an affair with then-President Donald Trump, he quickly became a cable news darling even as the evidence of his troubled past and illegal activities began to surface.

A study done by NewsBusters found that Avenatti had a whopping 254 hits on cable news in 2018, including 122 appearances on CNN and 108 on MSNBC.

Our old friend Michael Avenatti is about to be sentenced to prison.

Liberal pundits on these networks showered him with compliments for his outspoken criticism of the Trump administration.

“Lately for me, you’re like the Holy Spirit. You are all places at all times,” said Ana Navarro of “The View”; “You are something of a folk hero,” said Bill Maher; “Michael Avenatti is a beast,” said MSNBC’s Eddie Glaude Jr., “He’s the savior of the Republic,” said Joy Behar.

“I owe Michael Avenatti an apology. For the last few weeks, I’ve been saying, ‘Enough, already, Michael, I’ve seen you everywhere. What do you have left to say?’ I was wrong, brother. You have a lot to say,” said MSNBC’s Stephanie Ruhle, adding, “The Democrats could learn something from you. You are messing with Trump a lot more than they are.”

“You’re like the Holy Spirit. You are all places at all times”pic.twitter.com/FwUPhl0jqo

Many even went as far as to say that Avenatti could be a potential contender in the 2020 election, notably CNN’s Chris Cillizza, who said “never say never” to a possible Avenatti presidency.

“I don’t know that it’s a good thing that star power and TV savvy is required for the job, but I think it is,” CNN’s Brian Stelter told Avenatti in an interview on the odds that he would run for president. “Looking ahead to 2020, one of the reasons why I’m taking you seriously as a contender is because of your presence on cable news,” Stelter added. 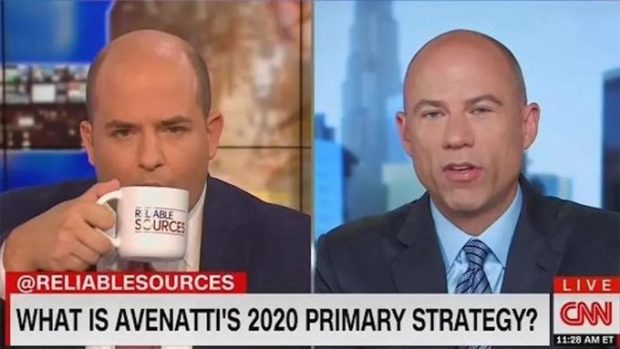 In addition to the endless amounts of airtime, the media also promoted the dubious allegations of gang rape from Avenatti’s client Julie Swetnick against Supreme Court Justice Brett Kavanaugh during his confirmation hearing. (RELATED: Media Struggles To Confront Their Failures In Covering Michael Avenatti)

“Julie Swetnick’s Allegations Likely To Finish Off Brett Kavanaugh,” read a headline from New York Magazine. Swetnick also received a primetime interview on NBC News even though they reportedly knew the evidence in her story was shaky, according to the Miami Herald.

In addition to his extortion charge, Avenatti is also facing a maximum of 333 years in prison after a federal grand jury indicted him on charges that he stole millions of dollars from his clients, one of whom was a paraplegic man, as well as the Internal Revenue Service (IRS), in order to fund his lavish lifestyle.

Avenatti also faces charges for committing fraud and aggravated identity theft related to his former client Stormy Daniels and was arrested in 2019 for domestic abuse.