Senators are sprinting to finalize their bipartisan infrastructure deal with their scheduled August recess just over a week away.

Those involved in the negotiations spent the weekend trying to reach a deal as soon as Monday, but hit roadblocks over public transit funding and spending levels for highways, broadband and some other areas.

“We’re about 90% of the way there,” Ohio Republican Sen. Rob Portman told ABC News’ “This Week” Sunday. “We have one issue outstanding … It’s about mass transit,” he added, noting that both sides have made concessions.

Virginia Democratic Sen. Mark Warner echoed Portman, saying that he was hopeful that a final compromise could be reached Monday.

“A group of us, ten of us, five Democrats, five Republicans, have been working on this for the last couple months,” Warner said on “Fox News Sunday.” “This is the same group who actually put together the last COVID deal under President Trump. So we know each other, we trust each other.”

But Pennsylvania Sen. Pat Toomey, the top Republican on the Senate Banking, Housing and Urban Affairs Committee which oversees public transit, said that there were already ample funds available for it and questioned how much more it really needed.

“Nobody’s talking about cutting transit,” Toomey said Sunday on CNN’s “State of the Union.” “The question is, how many tens of billions of dollars on top of the huge increase that they have already gotten is sufficient? And that’s where there is a little disagreement.” (RELATED: Americans Want Roads And Bridges. They’re Mixed On Other Priorities) 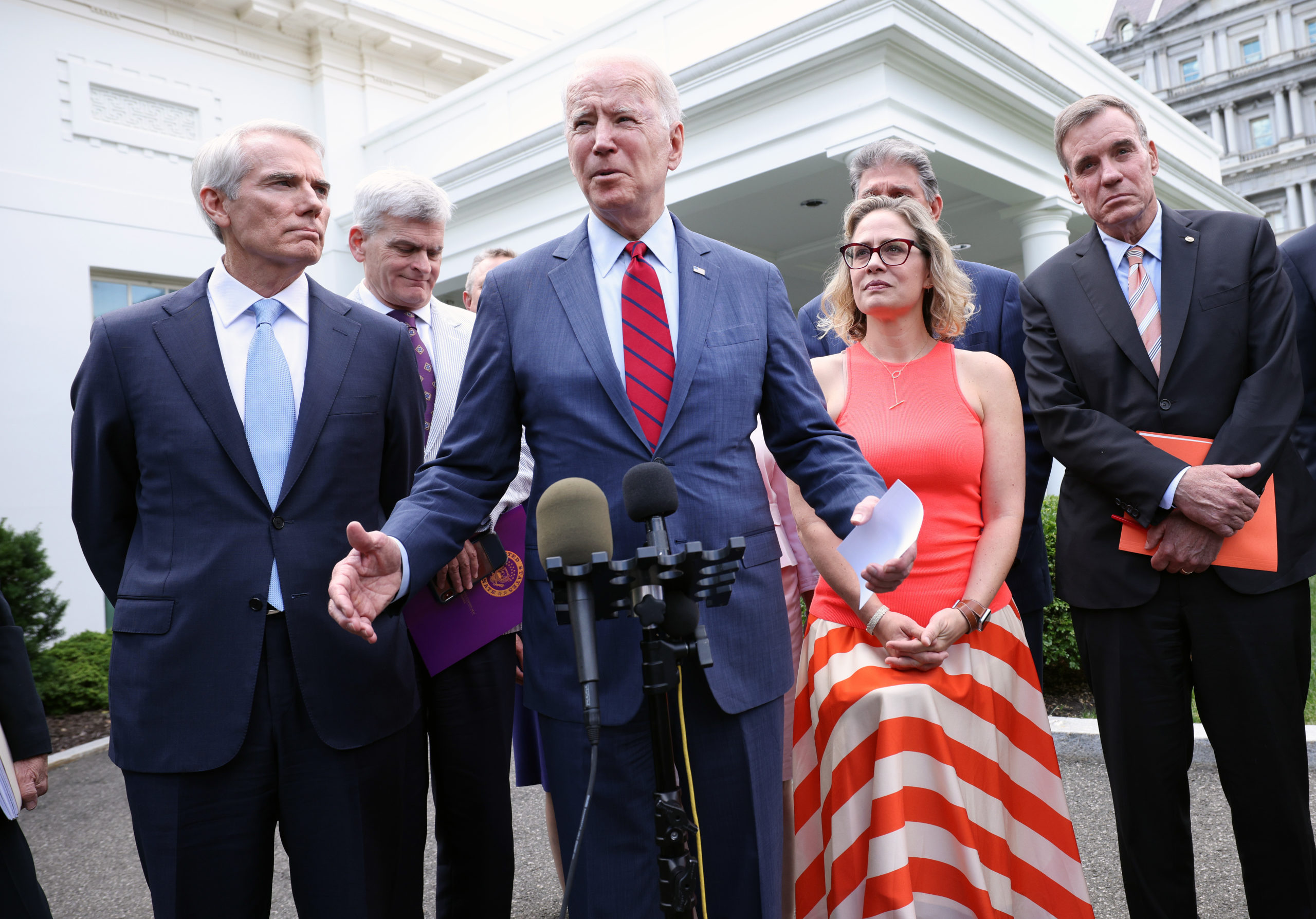 President Joe Biden speaks after the bipartisan group of Senators reached a deal on an infrastructure package on June 24. Sens. Portman, Sinema and Warner stand from left to right in the front row. (Kevin Dietsch/Getty Images)

Though confident, senators have mere days before they are set to leave Washington, D.C., until after Labor Day. Senate Majority Leader Chuck Schumer has said that he hopes to pass both the $973 billion infrastructure plan and Democrats’ $3.5 trillion reconciliation package before they leave, but the former has yet to be written and the latter requires multiple votes that must pass on party lines and a vote-a-rama, a marathon session where senators can offer dozens, if not hundreds, of amendments to the proposed bill. (RELATED: Schumer, Sanders Compromise On $3.5 Trillion Reconciliation Package)

Schumer brought the bipartisan infrastructure plan to the floor Wednesday for a preliminary vote, but Republicans unanimously voted against it since the package was not yet finalized. Instead, those involved in negotiations pledged to support it once it was transformed into an actual bill.

Both packages must also pass the House before making their ways to President Joe Biden’s desk.

The House also passed a separate $715 billion surface transportation bill earlier in July, and Oregon Democratic Rep. Peter DeFazio, the chairman of the House Transportation and Infrastructure Committee, recently warned that the transit provisions in the bipartisan Senate bill were inadequate and that any legislation should incorporate their own passed provisions.

Several progressives in the House have also voiced dissatisfaction with the bipartisan bill, arguing that it does not go far enough to combat climate change or promote cleaner forms of transportation. Some have even threatened to vote against the bill altogether if Democrats’ reconciliation package fails.