The White House, amid the Taliban’s rapid takeover, has engaged in a messaging makeover as it attempts to ward off criticism over the U.S. troops’ drawdown from Afghanistan.

The Taliban quickly gained control of major cities throughout the region, entering Kabul on Aug. 15 and ultimately declaring victory. President Joe Biden denied that the swift takeover caught him and his administration off guard during a speech Monday, but his comments sharply contrasted with ones he made on July 8.

At the time, Biden boasted about the Afghan military forces and dismissed the Taliban’s ability to take control, declaring a takeover “not inevitable.”

“No, it is not, because the Afghan troops have 300,000 well-equipped — as well-equipped as any army in the world — and an air force against something like 75,000 Taliban. It is not inevitable,” Biden told reporters.

“The likelihood there’s going to be the Taliban overrunning everything and owning the whole country is highly unlikely,” he added.

During that speech, the president noted that “the Afghan government and leadership has to come together” and expressed confidence in their “capability to sustain the government in place.” Still, Biden said that there’s wasn’t “a conclusion that, in fact, they cannot defeat the Taliban.”

Biden also assured Americans that “there’s going to be no circumstance where you see people being lifted off the roof of a[n] … embassy … of the United States from Afghanistan,” and brushed off comparisons to Saigon in 1975.

“What you had is you had entire brigades breaking through the gates of our embassy — six, if I’m not mistaken. The Taliban is not the South — the North Vietnamese army,” he said. “They’re not — they’re not remotely comparable in terms of capability … It is not at all comparable.”

Just over a month later, after the Taliban walked into Kabul, gave a press conference in the presidential palace and announced the “Islamic Emirate of Afghanistan,” the messaging coming from the White House began to change.

On Monday morning, national security advisor Jake Sullivan spoke to NBC News about the catastrophe unfolding. Biden remained in Camp David early that day, with no announcement on whether he’d be addressing the country. Sullivan was pressed about Biden’s promise that Americans wouldn’t “see people being lifted off the roof of” the embassy in Afghanistan.

Over the weekend, officials rescued people in Afghanistan by picking them up from the roof of the embassy.

“To be fair, the helicopter has been the mode of transport from our embassy to the airport for the last 20 years,” Sullivan responded. 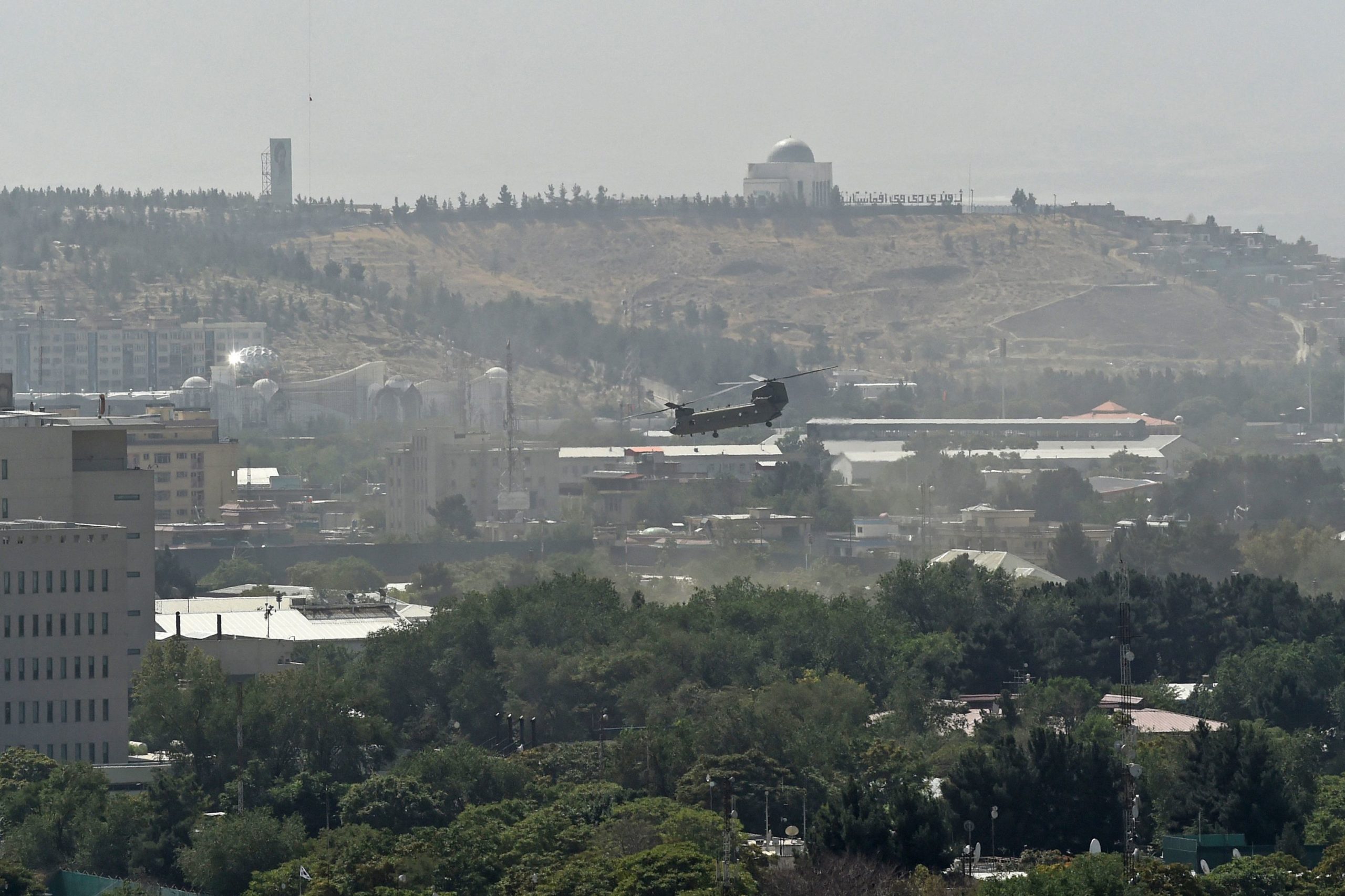 After pushback from NBC anchor Savannah Guthrie, Sullivan admitted that “the speed with which cities fell was much greater than anyone anticipated.”

Late Monday morning, the White House announced a schedule change: Amid criticism over his silence, the president would be returning from Camp David and speaking to the nation about the fall of Afghanistan. During that speech, Biden conceded – as Sullivan had – that he was surprised by the speed at which the Taliban took over. Biden claimed to have planned for “every contingency.”

“My national security team and I have been closely monitoring the situation on the ground in Afghanistan and moving quickly to execute the plans we had put in place to respond to every contingency, including the rapid collapse we’re seeing now,” Biden said. “But I always promised the American people that I will be straight with you. The truth is: This did unfold more quickly than we had anticipated.”

Biden took no questions after his remarks and returned to Camp David, where he remained until Tuesday evening. (RELATED: DOD Prepping US Military Bases To House Up To 30,000 Afghan Refugees, Americans Won’t Be Given Evacuation Priority)

Sullivan expanded on the administration’s claims of preparedness during Tuesday’s press briefing, declaring that they in part did not conduct a mass evacuation because the Afghan government and its supporters “made a passionate case” against the move.

On Monday, Biden had told the nation that the seemingly delayed evacuation occurred because “some of the Afghans did not want to leave earlier.”

“The Afghan government and its supporters, including many of the people now seeking to leave, made a passionate case that we should not conduct a mass evacuation lest we trigger a loss of confidence in the government,” Sullivan said. “Now, our signaling support for the government obviously did not save the government, but this was a considered judgment.”

“The American forces now on the ground at HKAI [Hamid Karzai International Airport, Afghanistan] are there because of contingency planning and drilling we did over the course of months, preparing for a range of scenarios, including dire scenarios,” Sullivan continued, detailing how the administration was allegedly prepared for a quick Kabul fall. “President Biden ordered multiple battalions to be pre-positioned in theater, and he activated them for deployment before the fall of Kabul. He also put additional battalions on a short string here in the United States. Those battalions have now flowed in as well.”

While Sullivan admitted that “there were chaotic scenes” coming from the ground in Afghanistan – most notably the videos of Afghans clinging to U.S. aircraft and eventually falling to their deaths in an attempt to not be left behind – he declared that “well-drawn plans” still “require adjustments.”

Sullivan also said that Biden brought together the principals on August 11 “to discuss the deteriorating situation” in Afghanistan. At this time, the president asked about sending in more troops to help with an embassy draw-down and evacuation. Biden left the White House on August 12, issuing the order that same day. Eventually, the administration determined more troops were needed and moved to “step two of that contingency plan,” according to Sullivan.

On Wednesday, more messaging came from White House when White House deputy press secretary Andrew Bates pointed out portions of an op-ed written by The Washington Post’s Jennifer Rubin where she declared that “the administration didn’t anticipate a Taliban takeover, at least not an immediate one.”

“False,” Bates highlighted in a tweet, directly citing Rubin’s piece. “That possibility was in intelligence reports. The administration placed thousands of troops in the region to arrive promptly in the event of a swift disintegration.”

Rubin, in her piece, continued on to note that “it is true, however, that the expectation was that the Afghan army wouldn’t capitulate without fighting.”

“‘The administration didn’t anticipate a Taliban takeover, at least not an immediate one.’ False. That possibility was in intelligence reports. The administration placed thousands of troops in the region to arrive promptly in the event of a swift disintegration.”

Chairman of the Joint Chiefs Gen. Mark Milley added confusion to the White House’s messaging during a briefing at the Pentagon Wednesday afternoon when he declared that not a single person saw anything “that indicated a collapse of [the Afghan] army and this government in 11 days.” In the same breath, Milley said the intelligence did note that one potential outcome was “an outright Taliban takeover following a rapid collapse of the Afghan security forces and the government.”

“Another was a civil war, and a third was a negotiated settlement,” Milley continued. “However, the time frame of a rapid collapse – that was widely estimated and ranges from weeks to months and even years following our departure. There was nothing that I or anyone else saw that indicated a collapse of this army and this government in 11 days.”

Milley continued on to say that Central Command submitted multiple plans, adding that one of these plans is being “executed right now.”

That same day, ABC News released a preview of Biden’s sit-down interview with host George Stephanopoulos. This was Biden’s first time doing a formal interview with the press since the Taliban takeover. During that interview, Biden claimed for the first time that there wasn’t a way “out without chaos ensuing.”

When asked whether chaos was always included in his decision-making, the president said “yes” before quickly backtracking to note that he didn’t price in “exactly what happened.”

Biden’s comments during that interview stand in contrast with what he told the nation back on July 8, when he confidently declared the “drawdown is proceeding in a secure and orderly way.” At the time, Biden gave no indication of the chaos he now says he expected.

As the White House tries to handle the situation in Afghanistan – which has left thousands of U.S. citizens and Afghan allies still waiting for evacuation – the president’s former confidence in a smooth drawdown has forced the administration to scramble to find a consistent, concrete message that explains how things went so far south so quickly.

A White House official, when asked about the apparent changes in comments about Afghanistan, told the Daily Caller that the administration “planned for a host of scenarios” and repeated that the speed at which the Afghan army fell came as a surprise.

“We planned for a host of scenarios and as the President said previously, the Afghan leadership and army would have to manifest the will to successfully defend their country,” the official said. “We pushed for months to help that happen. As we have acknowledged earlier this week and repeated today, the speed of the army’s retreat was a surprise. We are now focused on getting all Americans, as well as our allies and vulnerable Afghans, out of the country through HKIA and have taken charge at the airport, with more flights taking place each day.”

Editor’s Note: This piece has been updated to clarify that Bates was quoting a piece published by The Washington Post.