Democratic Texas state Rep. Jarvis Johnson is vowing to remain in Washington, D.C., to avoid a vote on an election bill passed by the state Senate, he told The Daily Caller in a recent interview.

Returning to Texas “would lose sight of what we’re trying to do,” he said of his and 51 other Democrats’ efforts to prevent the state from passing an election integrity package. The 52 Texas Democrats left July 12 to prevent a quorum from forming.

The latest version of the Texas election bill expands voter ID requirements for Texans who vote by absentee ballots, increases the ability of political parties to employ poll watchers, and provides instructions to counties about maintaining and removing individuals from voter rolls.

“This was turning into a tyrannical government,” Johnson said of the election law. “A government that was over-legislating for no other reason than to create a power base for themselves to ensure their reelection and to turn Texas red.”

Johnson told The Daily Caller that the provisions that have since been removed, including a limit on Sunday voting hours, were evidence of the law’s discriminatory intent.

Republicans “specifically targeted ‘Souls to the Polls.’ We know the black church does ‘Souls to the Polls,'” he said. Republican Texas state Rep. Travis Clardy told NPR that a provision limiting Sunday voting times was a typo, and the bill currently provides for at least six hours of early voting on Sunday between 6 a.m. and 9 p.m.

Johnson said that he “had been thinking about [breaking quorum] for quite some time, as early as April, because [he] was able to see that there was nothing going on on the floor with respect to communication. No negotiation. Republicans were just ramming everything down [their] throats.” (RELATED: Some Of The Texas Dems Who Ran Away To DC Test Positive For COVID-19)

He cited a heartbeat bill, a “constitutional carry” gun rights bill and a bill that would cut funding from cities that attempted to cut police funding as evidence that Democrats were not impacting the state’s legislative process. Republicans hold an 82-67 seat advantage in the Texas state House and an 18-13 advantage in the state Senate.

State Democrats have, however, introduced and made law bills related to Medicaid reimbursement, public health data collection, and instruction for students who do not speak English as a primary language. 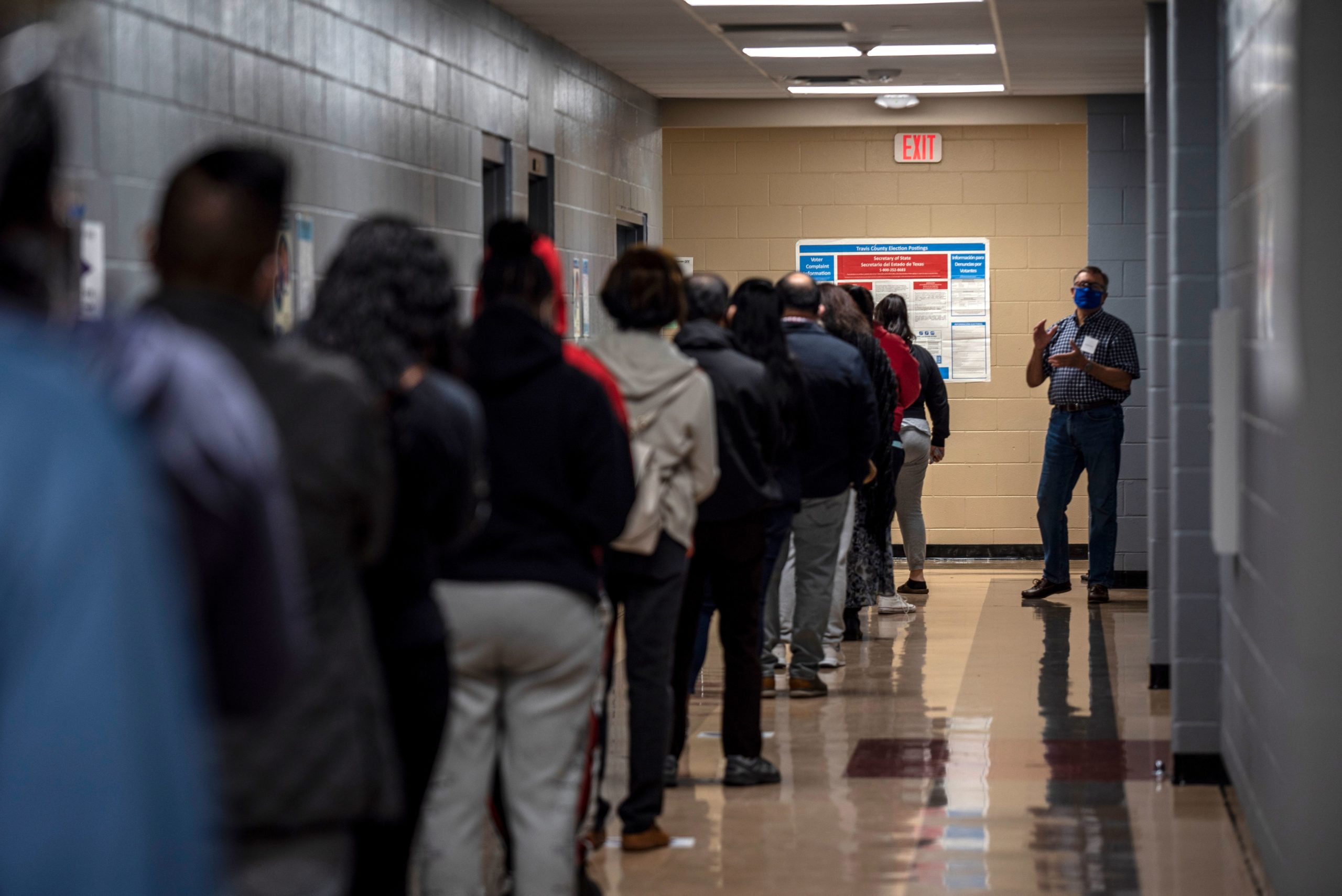 TOPSHOT – A poll worker talks to a line of voters on election day on November 3, 2020 in Austin, Texas. (Photo by SERGIO FLORES/AFP via Getty Images)

Johnson also defended Hervis Rogers, a man who was arrested for voting during the 2020 Democratic presidential primary while on parole for an armed robbery conviction, arguing that he should not be held criminally responsible.

Johnson would not identify the single provision of the bill that he found most offensive, claiming that “It’s like saying, ‘we can take something out, your heart or your lungs, which one do you want?’ It doesn’t matter, I’m going to die.”

“Poison is poison, no matter what you take out. I can dig things out of the bill, but that doesn’t make it less poisonous. Poison is still going to kill you,” he continued.

Johnson claimed that these provisions would “reverse the hands of time. We’re going to go back to the Jim Crow era of suppressing people’s ability to vote? No, we refuse to do that.”

Johnson added that his “constituents absolutely love, love, love and respect immensely what [he’s] doing” in leaving the state to prevent a vote. “I’ve actually got Republican constituents calling and saying thank you.”

I’m standing tall. My constituents did not elect me to falter when things get hard; they elected me to lead our community with conviction and protect their rights and livelihood. For me, I’ll always put my people over any committee assignment, or backroom deal. #txlege pic.twitter.com/t3nx1LAAFG

“Unfortunately, there’s a mindset out there now, that listens to the lie, and unfortunately have these lying Republicans running around here saying we want to protect the integrity of the ballot box and they’re literally dog-whistling racism,” he said.

To prevent the bill, Johnson said, Democrats “realized that the most important thing we could do was go to the federal level and lobby.”

While in Washington, he said, the most important conversation he had was with Democratic West Virginia Sen. Joe Manchin. (RELATED: VP Kamala Harris To Meet With Texas Democrats Who Fled State Capitol)

Johnson called for Democrats to “vote to eliminate the filibuster or make an exception to it” in an Aug. 6 op-ed so that they could pass HR1 and the John Lewis Voting Rights Advancement Act.

When pressed on the difference between his decision to break quorum and the filibuster, Johnson laughed. “What we’re doing is no different than the filibuster,” he said.

“Just like I told my colleagues here in Texas, if you guys get rid of the filibuster, I’ll come back to the statehouse.”