A Democratic Party official in Illinois’ second most populous county sent out a series of tweets including one that said “the blood of Kyle Rittenhouse’s victims is on the hands of Wisconsin citizens, even the children,” shortly after a vehicle crashed through crowds of people at a Christmas parade in Wisconsin, according to reports.

Mary Lemanski is the social media director of the Democratic Party of DuPage County, Illinois, Fox News reported. The tweet, which was posted just after midnight on Monday, was subsequently deleted, and Lemanski has since resigned from her position as social media director, according to the outlet.

That tweet followed on the heels of several other posts by Lemanski that mocked the Sunday carnage in Waukesha, Wisconsin, when an SUV plowed through a Christmas parade killing at least five and maiming dozens of others.

“It was probably just self-defense,” Lemanski stated in a since deleted tweet with the hashtags “Wisconsin” and “KyleRittenhouse.” “I’m sad anytime anyone dies. I just believe in Karma and this came around quick on the citizens of Wisconsin,” she tweeted, according to Fox News. “You reap what you sow, Wisconsin,” was another of her since deleted tweets, the outlet reported. (RELATED: ‘The Revolution Has Started’: BLM Activist Claims, Without Evidence, Wisconsin Attack Might Be Retribution For Rittenhouse Verdict)

“Nobody cared about me like my whole life. My mom used to leave me for hours at a time alone in my play pen. I’ve put out music for 20 years nobody gave a shit. Why do people all of a sudden care about a stupid remark? I can’t believe my 15 minutes of fame is for this shit,” Lemanski wrote in a tweet early Monday morning. 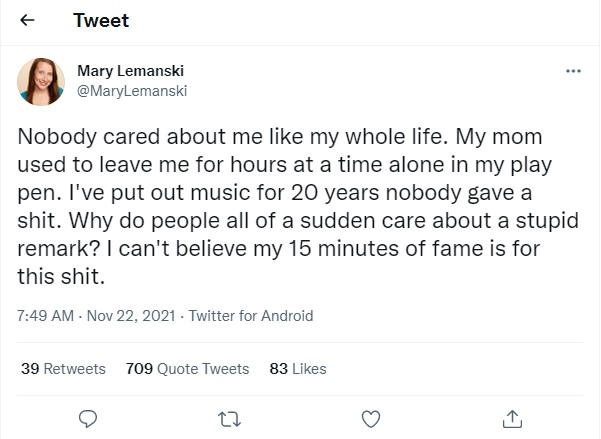 A man suspected of committing the Waukesha massacre, Darrell Brooks, has been apprehended. The Milwaukee County District Attorney admitted Monday that releasing Brooks on bond just days before the crash, when he was already facing charges of Second Degree Recklessly Endangering Safety, Felony Bail Jumping, Battery, Obstructing an Officer and Disorderly Conduct, was a mistake.