Tennis, a largely solitary sport that’s become known for the often lonely grind to the top, recently found its players banding together for a reason no one saw coming: Taking on China. For the players, this is a good start – but many believe there’s more to be done.

Chinese tennis star Peng Shuai, a 35-year-old who has been ranked as high as 14 in the world in singles and number one in doubles, disappeared after making allegations of sexual assault against former top Chinese official Zhang Gaoli on Nov 2. Her accusations were swiftly wiped from the web in China, and Peng ceased being seen or heard from publicly – until Chinese state media began publishing specific video footage as well as an email purportedly from the tennis star where she recanted her accusations and claimed to be fine.

The situation has garnered media attention across the globe, particularly after the Women’s Tennis Association (WTA) publicly called out China and repeatedly expressed concerns about Peng’s safety and freedom. WTA Chairman and CEO Steve Simon even threatened to pull out of all tournaments in the country, a move that would certainly affect the association’s revenue. (RELATED: CNN Calls Out China Live On Air For Censoring Their Peng Shuai Coverage)

The Daily Caller spoke with over half a dozen current WTA and ATP [Association of Tennis Professionals] players and coaches about Peng, the battle with China and what’s next. Some players spoke on condition of anonymity, often citing worry over China, where many have to travel to for tournaments throughout the year.

Among them all, a common theme reigned: Players, currently competing on all levels of the professional circuit, have a lot of fight left for Peng, and they hope that other organizations and countries will take up the fight as well.

In particular, many players the Caller spoke with expressed hope that countries like the U.S. will do more to pressure China over the situation.

“I think all nations should be doing more,” Australian WTA coach Damon Lucht said. “I don’t think it just should be up to the U.S. I think the U.S. being such a superpower puts themselves in a position – I don’t think it’s [just] a U.S. thing … It’s a Tennis Australia thing, I think it’s a USTA [United States Tennis Association] thing, I think it’s a humanitarian thing. I think if it was Serena Williams or Ash Barty, people would be cracking the shits already.”

“All of us should be standing up saying, ‘what is actually going on here?”’ Lucht added.

WTA player Marcela Zacarias pointed out Shuai’s dedication to the sport and noted that “if her country is against her, I would hope someone or something bigger can help her.” Other players echoed these comments, with one WTA player highlighting the fact that China is a communist country and expressing concern that “they can have so much control over the world in that type of government.”

“If someone’s life is in danger because they’re coming out against something so serious, then yeah, I think countries that have a lot of power should be able to maybe have some say or input for sure,” the player said. “If there’s any way that there could be input from other organizations and countries, then I don’t see why there shouldn’t be.”

“We are deeply concerned by reports that Peng Shuai appears to be missing after accusing a former PRC senior official of sexual assault,” White House press secretary Jen Psaki told reporters. “We join in the calls for PRC authorities to provide independent and verifiable proof of her whereabouts and that she is safe.” 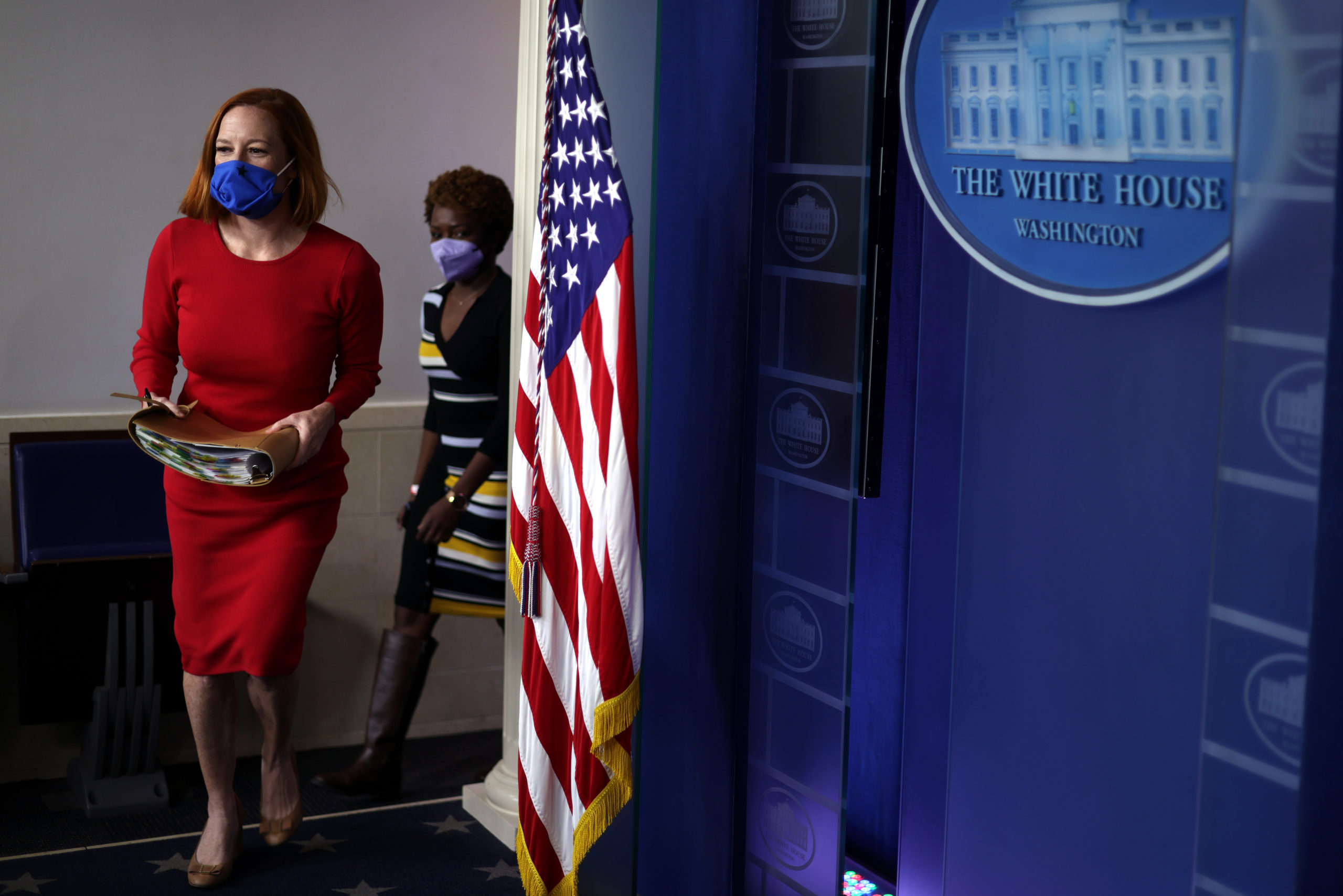 ATP player Hunter Johnson, one of the many male players voicing support for Peng, criticized the administration’s response to the issue. He called it ” disappointing” and highlighted a broader issue of media coverage and censorship.

“Hopefully people see this for what it is – government control and power and basically, these governments … are trying to protect themselves at all costs. I think they gave a pretty light statement on all of it and that’s kind of disappointing,” Johnson told the Caller. “Like I said before, there’s a big problem with media these days and censoring, and hopefully people can see that. For this to change, people really need to hit the hammer down and get back to the facts instead of all the half-truths and lies and manipulation and censoring.”

Aside from joining “in the calls,” it’s unclear whether the administration has any plans to become more involved. President Joe Biden is considering a diplomatic boycott of the upcoming Winter Olympics, which are set to take place in Beijing, but this consideration hasn’t been directly tied to Peng. (RELATED: State Department Releases Report Blasting China For Its Genocide Against The Uighurs)

As for the players, many voiced support for a potential Olympic boycott – not for the sport of tennis, which is a summer Olympics sport. American WTA player Kennedy Shaffer, for one, said she “100%” supports an Olympic boycott.

Others, while saying they’d back a boycott personally, also grappled with the difficulty of such a decision and how it would affect athletes who may have spent their lives training for an opportunity to compete for their country.

“That’s maybe something that can really throw them [China] off and scare them, if enough countries kind of threaten not to go to the Olympics. But that’s a big call, there’s a lot of people that have worked really hard to not – to then have that decision taken out of their hands,” a WTA player noted.

“For me to personally say, yes. But I think on big picture, it’s a huge call that I wouldn’t want to put that decision out there and ruin a lot of athletes careers,” the player continued. “I think that’s a huge call. I think I would love to see it, you know, from my point of view, but I don’t think – from looking outside my point of view – it would be the right thing for others.” 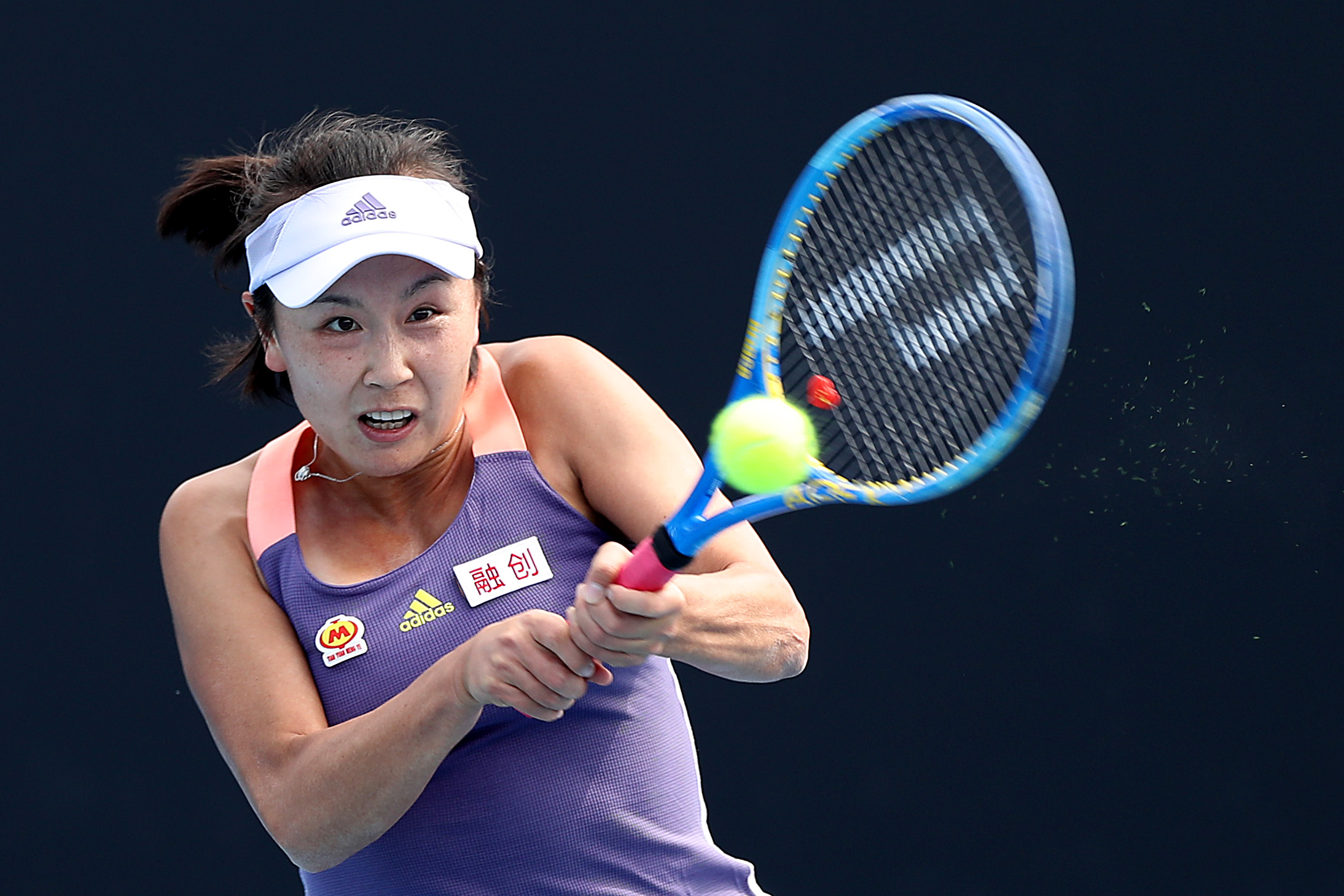 MELBOURNE, AUSTRALIA – JANUARY 21: Shuai Peng of China hits a backhand during her Women’s Singles first round match against Nao Hibino of Japan on day two of the 2020 Australian Open at Melbourne Park on January 21, 2020 in Melbourne, Australia. (Photo by Mark Kolbe/Getty Images)

The International Olympic Committee (IOC) recently involved itself with Peng’s ordeal, attempting to put concerns to bed by revealing its president Thomas Bach held a 30-minute virtual video call with Peng over the weekend. The news did little to sway public opinion and largely sparked further concerns over Peng’s ability to speak freely.

“My personal opinion is that there were how many people, how many organizations wanting clarification on it. The WTA has obviously been her source of employment for a really long time, and I have a hard time believing that when you’re on the tour for that long you don’t have friends and people and colleagues that have become very near and dear to your heart,” Shaffer said, pointing out the IOC’s “vested interest with the games being in Beijing.”

The WTA, too, was not convinced by Bach’s call.

“While it is positive to see her, it remains unclear if she is free and able to make decisions and take actions on her own, without coercion or external interference,” Simon said in a statement following the video call, according to Insider.

“This video alone is insufficient. As I have stated from the beginning, I remain concerned about Peng Shuai’s health and safety and that the allegation of sexual assault is being censored and swept under the rug. I have been clear about what needs to happen and our relationship with China is at a crossroads,” the statement continued.

Many athletes the Caller spoke with felt pride with the WTA’s willingness to speak up against China. Some expressed surprise over the move, citing other sports that have opted to bow to China instead.

“I was a bit shocked that the WTA took a pretty strong stance, to be honest, because there have been other sports organizations that have kind of gone toe-to-toe with the powers that be of China and haven’t taken such a firm stance on it, and so for the WTA – we’re not football, we’re not basketball. I love us, obviously, as a player, but we don’t … have the same resources and maybe the same pull that they do – so it was a very proud moment to see that we’ve kind of held our backbone on this,” Shaffer told the Caller.

“If we can do it, if we can maybe turn a page or lead a charge or something, maybe we can do something. Human rights issues, humanitarian issues, are not something to be taken lightly … The same goes with sexual assault victims,” she continued. “To see my organization stand up and do something about it – it’s incredible.”

Zacarias had similar thoughts. She told the Caller that Peng speaking out was “super brave” and also praised Simon for his bravery in the face of China.

“I think Steve Simon was really brave about saying all these things about the tournaments and trying to look out for the players and look out for her, and trying to – I hope – reach out to her and know that she’s okay. I think that as a tennis player, we’re persons [sic] first, and we as an organization or as a group of women tennis players, we want someone to be” looking out for us, Zacarias explained.

Others, however, want the WTA to do even more.

“I think the WTA could be doing a lot more [not just] in this situation, but also in women’s tennis. I feel like if you look at the ATP … they’re so supportive and they’ve got each other’s back,” a WTA player explained.

“I think if this were to happen to them, it would be a completely different discussion,” she continued, lamenting that female tennis is “such a dog-to-dog sport” and that the association and its players as a whole could have been doing more earlier on.

Another player also commented on the slow start, saying she absolutely supports the WTA pulling out of tournaments in China but expressing disappointment in “how long it took them to take any action.”

Ultimately, every single player and coach the Caller spoke with appeared unconvinced of Peng’s safety, despite the IOC’s call and the selective footage published by Chinese state media. Players as a whole described feeling unsettled, scared and worried for Peng’s safety as well as shock that such a thing could happen to a top player.

“All the WTA, all the players and everyone, is [sic] concerned about her safety. It’s really frustrating not to know that she’s okay, and have the feeling that there’s something going on that no one’s saying,” Zacarias explained. “I hope she’s okay, I hope she can fly to the U.S. or somewhere where we will all know that she’s fine, because we’re all really worried for her.”