A majority of Americans believe President Joe Biden is not concerned with the impact that high inflation and rising costs have had on their lives, according to a Trafalgar Group/Convention of States poll released Thursday.

Just over 43% of respondents said they believe Biden is “somewhat” or “very” concerned with the impact of inflation. 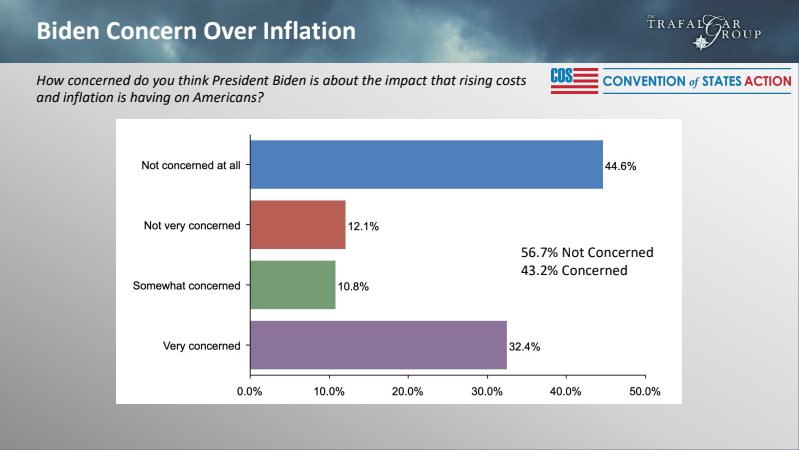 Poll from the Trafalgar Group and Convention of States. [Daily Caller]

The poll surveyed 1,084 likely general election voters between Dec. 4 and Dec. 7. and reported a 3% margin of error. Trafalgar employs a number of methods for conducting its polls, including live phone calls, automated calls, emails, text messages, and two other proprietary methods it does not share publicly. (RELATED: ‘Will Not Fix The Problem’: Biden Releasing Oil Reserves Due To Politics, Critics Say)

Convention of States President Mark Meckler says Americans see Biden as apathetic to economic problems due to a string of “tone deaf” messaging flops from members of Biden’s administration and the Democratic Party.

“The White House said ‘Oh, we saved you 13 cents on your 4th of July.’ Are you an idiot? Do you not live in reality?” Meckler said of Democrats in an interview with the Daily Caller.

Meckler went on to reference the Democratic Congressional Campaign Committee (DCCC) popping champagne corks over a two-cent drop in gas prices. The organization tweeted out a misleading graph that appeared to show plummeting gas prices, but the vertical axis used $0.005 and the price only dropped from $3.40 per gallon to $3.38 per gallon.

The Trafalgar Group was one of only two polling firms that accurately predicted Trump’s victory in the presidential election of 2016. The firm was also among the few that predicted Republican Florida Gov. Ron DeSantis’ win in 2018, as well as Republican victories in New Jersey and Virginia in November.

Biden entered office in January polling at a strong 54% and largely held support until late spring. Since then, the immigration crisis, the botched withdrawal from Afghanistan and the resurgence of COVID-19 accompanied with economic strife have had Biden polling in the high 30s and low 40s.

With the 2022 midterm elections less than a year away, Republicans smell blood in the water. Nevertheless, Meckler says the Americans and even conservatives he’s spoken to aren’t necessarily excited to have Republicans in power. Taking Congress in the 2022 elections would put Republicans in a difficult standoff with Biden in the White House, and voters aren’t convinced there will be change.

“What I hear from conservative voters is, what’s their plan?” Meckler said.