“When it comes to solar, you have the people that support American manufacturers and then you have groups like SEIA and American Clean Power that are just blatantly lobbying for the outcome that would benefit Chinese solar manufacturers and Chinese companies,” Nick Iacovella, of the Coalition for a Prosperous America (CPA), told the DCNF in an interview.

Iacovella said the groups have taken such a hard stance against tariffs because of their closeness to Chinese companies that dominate the industry. Both SEIA and ACP’s member rosters include Chinese-based solar panel companies. (RELATED: Green Energy Push Is Contributing To Forced Labor, Slavery)

SEIA and ACP have vehemently opposed tariffs on Chinese-made solar panel equipment, arguing such protective measures would be harmful to the U.S.-solar industry and lead to job losses. SEIA opposed efforts by both the Obama and Trump administrations to raise the costs of importing Chinese-made solar cells and panels.

ACP, which was formed in 2021, has also taken up the anti-tariff mantle. Most recently, both ACP and SEIA came out swinging against the Biden administration for launching an anti-dumping investigation into Chinese solar companies operating out of Southeast Asia. 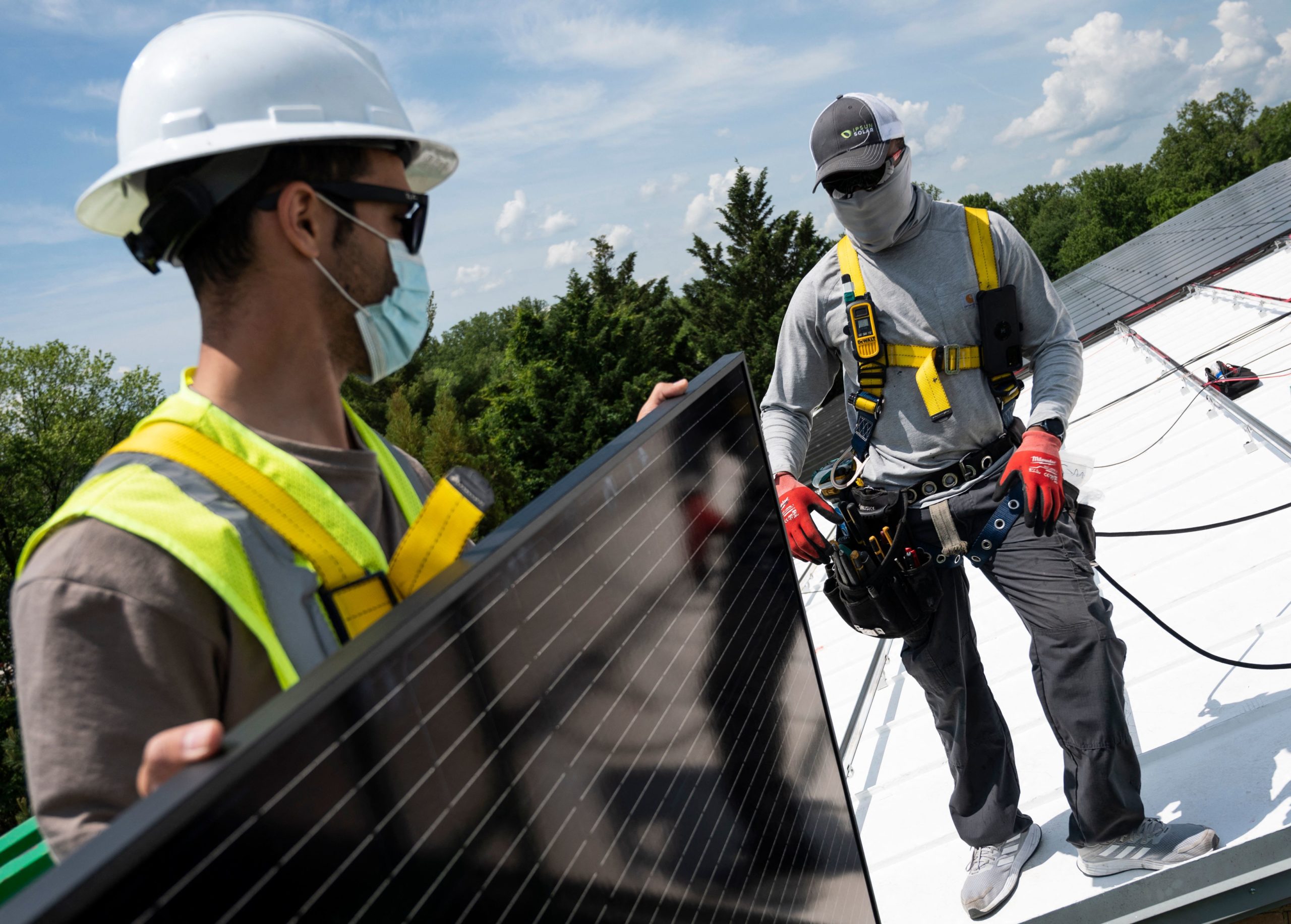 ‘Heck of a lot of energy companies’

Iacovella and CPA have also taken issue with the fact that both SEIA and ACP boast Chinese member companies.

“They’re funded by the Chinese,” he told the DCNF.

In 2019, SEIA announced that the Chinese solar maker JinkoSolar would join its board of directors. At the time, the Shanghai-based company said it was “eager to contribute to SEIA’s vision to shape the future of the U.S. solar industry.”

JinkoSolar, which remained on the group’s board as recently as March 2021, is no longer publicly listed as a board member, but is still listed as a SEIA member along with fellow Chinese solar powerhouses JA Solar and LONGi Solar. LONGi Solar is also an ACP member.

It’s unclear how many of the trade groups’ members are Chinese companies; the ACP’s membership directory is not publicly available. Neither the SEIA nor ACP directly answered questions about the make-up of their boards and number of Chinese member companies.

Complicating the situation is the fact that both SEIA and ACP’s boards of directors include utility companies and solar panel installers — both segments of the solar industry that tend to oppose tariffs on Chinese solar manufacturers.

For instance, SEIA’s board chairman is George Hershman of SOLV Energy, a major solar installer, and ACP’s board chair is Craig Cornelius of Clearway Energy Group. Mortenson Construction and Blattner Energy — the two largest engineering, procurement, and construction firms in the United States — have seats on both SEIA and ACP’s boards. 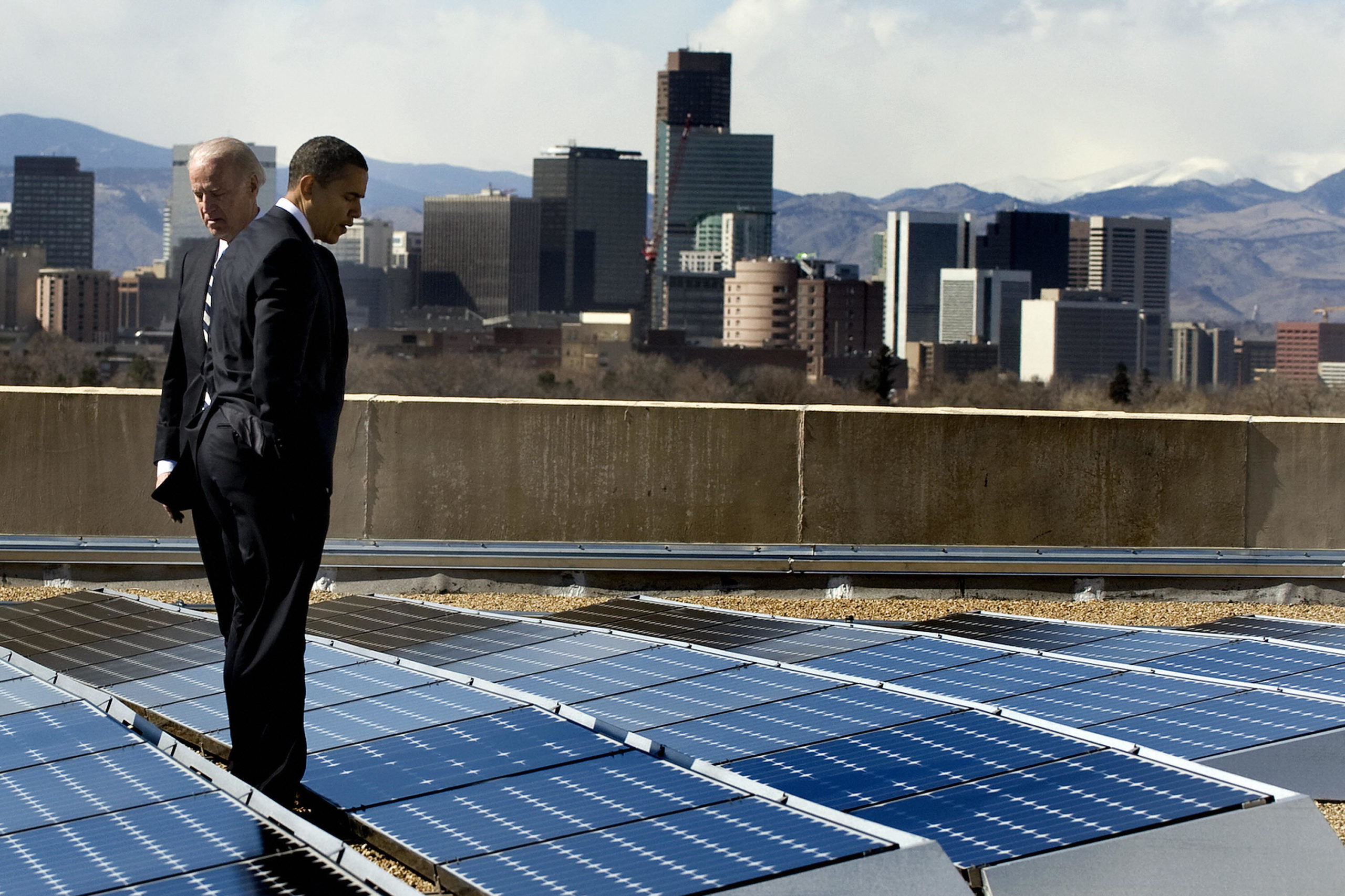 A spokesperson for the SEIA said it was committed to working with all types of companies within the industry to achieve a better business environment.

“SEIA’s board and membership consists of companies from every solar market segment, including manufacturers, developers, installers, financiers, etc.,” he continued. “Together, we craft strategies and policy positions that will create open, competitive markets for solar and storage companies.”

‘Their goal is to dominate’

The broader debate surrounding solar tariffs has taken off in recent years as the industry expands — globally, it’s expected to grow nearly 60% by 2028. President Joe Biden’s quest to decarbonize the electric grid would also massively increase demand for solar energy.

There’s just one problem — China currently dominates solar panel manufacturing. For instance, China produces more than 90% of the global supply of solar wafers, a key component in panels, according to a 2021 BloombergNEF analysis. The vast majority of U.S.-assembled solar panels heavily rely on Chinese-sources materials and components.

Chinese solar modules are roughly half the price of American solar modules, according to an industry analysis.

Bipartisan lawmakers, labor unions and groups like the CPA and Alliance for American Manufacturing have argued that solar tariffs are necessary to protect American companies from Chinese suppliers flooding the market with low-priced panels.

“If you’re an American solar manufacturer, you’re supportive of the tariffs because Chinese solar companies are incredibly subsidized by the Chinese government,” Iacovella said. “Their goal is to dominate. So they subsidize their industries, they undercut the American producer and as soon as the American producer is gone, they come in and they raise the price.”

For example, U.S.-based solar panel manufacturer First Solar, which is a SEIA member, came out in support of tariffs back in 2017. 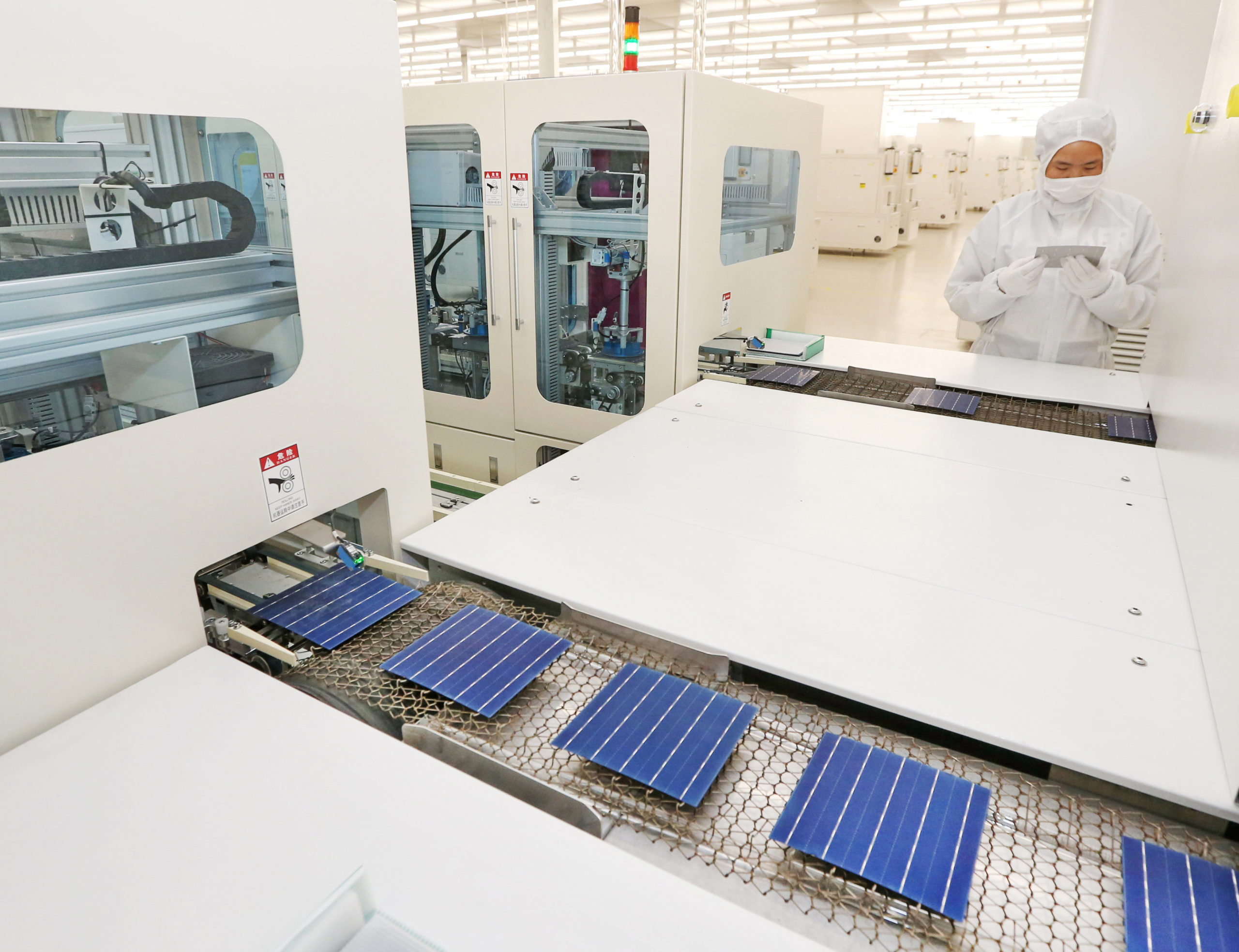 A Chinese worker inspects solar cells at a factory in 2018. (AFP via Getty Images)

However, the SEIA and ACP, along a slew of free market and liberal think tanks, stressed that tariffs block the U.S. from fulfilling its renewable energy goals and hurt the industry as a whole. SEIA and ACP signed a letter to President Biden in February 2021, asking him to reverse the Trump-era duties on Chinese solar panels.

“These actions did not and will not spur domestic manufacturing,” renewable energy groups wrote in their 2021 letter. “Instead, they created significant business uncertainty, added new costs to solar projects that were already contracted, and delayed numerous solar projects.”

In February, the Biden administration loosened some of the Trump-era tariffs but declined to remove them altogether.

‘The case is existential’

The tariff battle reignited in late March when the Commerce Department announced it would investigate allegations from California-based Auxin Solar that Chinese companies are offshoring operations to southeast Asian nations in order to skirt solar tariffs. (RELATED: ‘A Mad Scramble’: One Rare Mineral May Spell Doom For Electric Vehicle Market)

“The case is existential for us,” Auxin Solar CEO Mamun Rashid told the DCNF. “When Chinese panels come into the United States through these third countries at prices below our bill of materials, we can’t compete. We can’t pay our employees a fair wage.”

“The trade data show it,” he added. “We are confident in our allegations and that is why Commerce is conducting the investigation.” 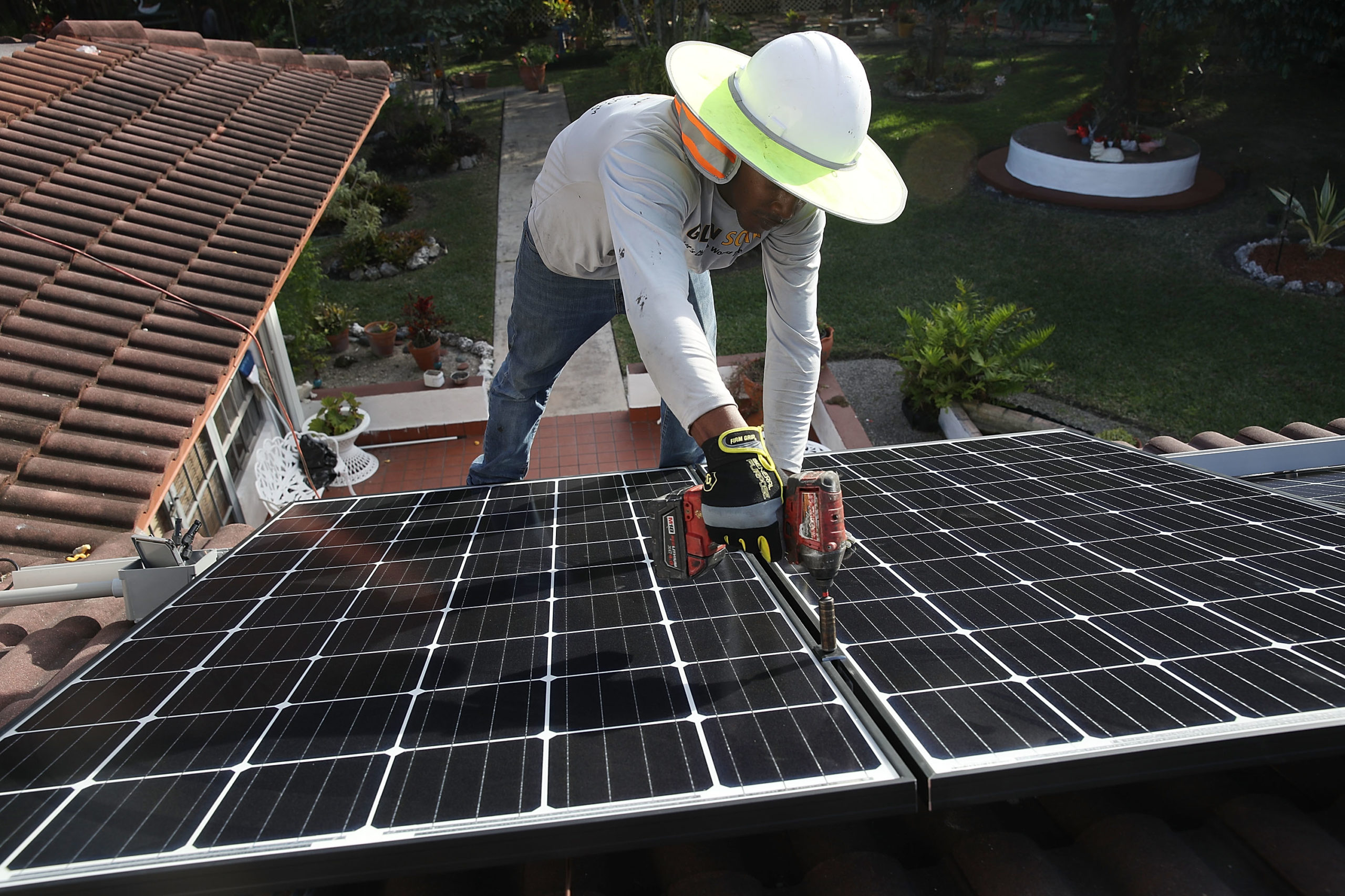 However, SEIA head Abigail Hopper said the probe would have a “devastating impact.” ACP CEO Heather Zichal, who formerly served in the Obama White House, said the action “signals that the Biden Administration’s talk of supporting solar energy is empty rhetoric.” (RELATED: Biden’s Green Transition May Usher In More Energy Insecurity. Here’s How)

“This case was brought on by one self-interested company and is a bad faith effort to co-opt trade law for their personal gain,” said SEIA’s Whitten, referencing a SEIA survey that showed 100% of the 200 surveyed solar makers “expect severe or devastating impacts to their business” as a result of the tariff investigation.

The ACP shared a previous statement about Auxin’s petition with the DCNF.

While Auxin’s Rashid commended the SEIA and ACP for precious work advocating on behalf of the U.S. solar industry, he slammed the groups over their opposition to tariffs.

“It’s unfortunate that these organizations do not support having a vibrant domestic solar manufacturing base,” Rashid, Auxin’s CEO, told the DCNF. “Unfortunately, many of the members of SEIA and ACPA are the circumventing foreign producers and the utilities and ECP companies that want cheap imports. Their motivation is to maximize profits.”

“Their scare tactics are belied by evidence; tariffs have been in place on solar modules for many years and it has not slowed solar deployment or solar price parity with other energy sources,” Rashid added. “Unfortunately, their policies directly reward the Chinese Communist Party and Chinese State-Owned Enterprises with access to our electricity grid to be funded by the U.S. taxpayer.”