The shooter who killed 19 students and two teachers at Robb Elementary School on Tuesday reportedly posted photographs of semi-automatic rifles to his Instagram story May 12 and sent another user multiple messages, according to TMZ. Authorities have identified the shooter as 18-year-old Salvador Ramos. 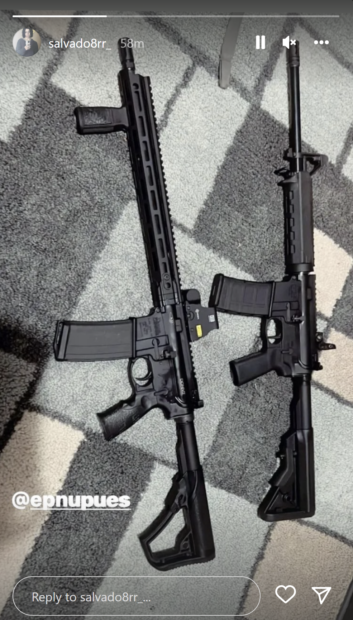 The Instagram user, apparently a minor female from the Los Angeles area, claims the shooter direct messaged her some cryptic notes, according to TMZ and the screenshots obtained by the Daily Caller. She was also tagged in a story highlight from the shooter which featured what appear to be two semi-automatic rifles, but she reportedly had no idea why the suspect reached out to her in the first place, TMZ noted.

The user shared the screenshots of the shooter’s direct messages to her personal Instagram story.

Multiple classmates of the suspect confirmed that the account “salv8dor_” belonged to the gunman, CNN reported. The account appears to have been taken offline since the images were shared online. (RELATED: ‘Hard To Think’: Trump Responds To Texas Mass Shooting)

The shooter allegedly sent videos and photographs of guns to other users via Instagram and other social media users, according to numerous social media users interviewed by ABC News. Law enforcement officials were reportedly made aware of the posts and are reviewing the screenshots of messages posted publicly by one social media user, ABC News noted.