A prominent pro-abortion activist group downplaying its association with the Revolutionary Communist Party (RCP) shares significant infrastructure and leadership with the radical outfit’s other offshoot groups, a Daily Caller analysis has found.

Although RiseUp4AbortionRights seems like most other pro-abortion groups at first glance, other pro-abortion activists released a statement in late June asserting that RiseUp is a front for a “pyramid scheme” and cult of personality. The Daily Caller’s examination of the organization’s leaders, online presence, and fundraising platforms lend credence to the claim that RiseUp is an offshoot front group for the RCP.

“Support for communism in the U.S. is incredibly low, so one way for these individuals to jump-start is to ride the coattails of something that has much more acceptability” in mainstream discussion of current political events, Brian Levin, director of the Center for the Study of Hate and Extremism, told the Daily Caller.

RiseUp shares leadership with the RCP and several of its related organizations. Sunsara Taylor is a prominent RCP spokeswoman and a co-founder of RiseUp. Taylor founded RiseUp in January 2022 to protest for “abortion on demand and without apology.” An earlier pro-abortion group Taylor founded, Stop Patriarchy, used the same slogan and also attracted scrutiny from other pro-abortion activist organizations, the Austin Chronicle reported in 2014. Stop Patriarchy has not posted any new tweets to its Twitter feed since 2020, but the organization’s website features more recent footage of an interview in which Taylor discusses the consequences of the Dobbs decision.

Taylor also founded The World Can’t Wait, Inc., (TWCW) alongside another RCP devotee in 2006 to oppose the Bush administration, particularly its policies in the Middle East.

Taylor went on to co-found another organization, Refuse Fascism, in 2016 to resist the incoming Trump administration. At the time, the RCP took credit for helping create Refuse Fascism on its website. The “what you can do now” quick links section at the bottom of the RCP website still links directly to the Refuse Fascism homepage.

Another leading RiseUp activist, Sam Goldman, is a prominent spokeswoman for Refuse Fascism. In a Jan. 2022 episode of the Refuse Fascism podcast featured on the organization’s website, Goldman stated that she has “been busy helping launch RiseUp4AbortionRights.” 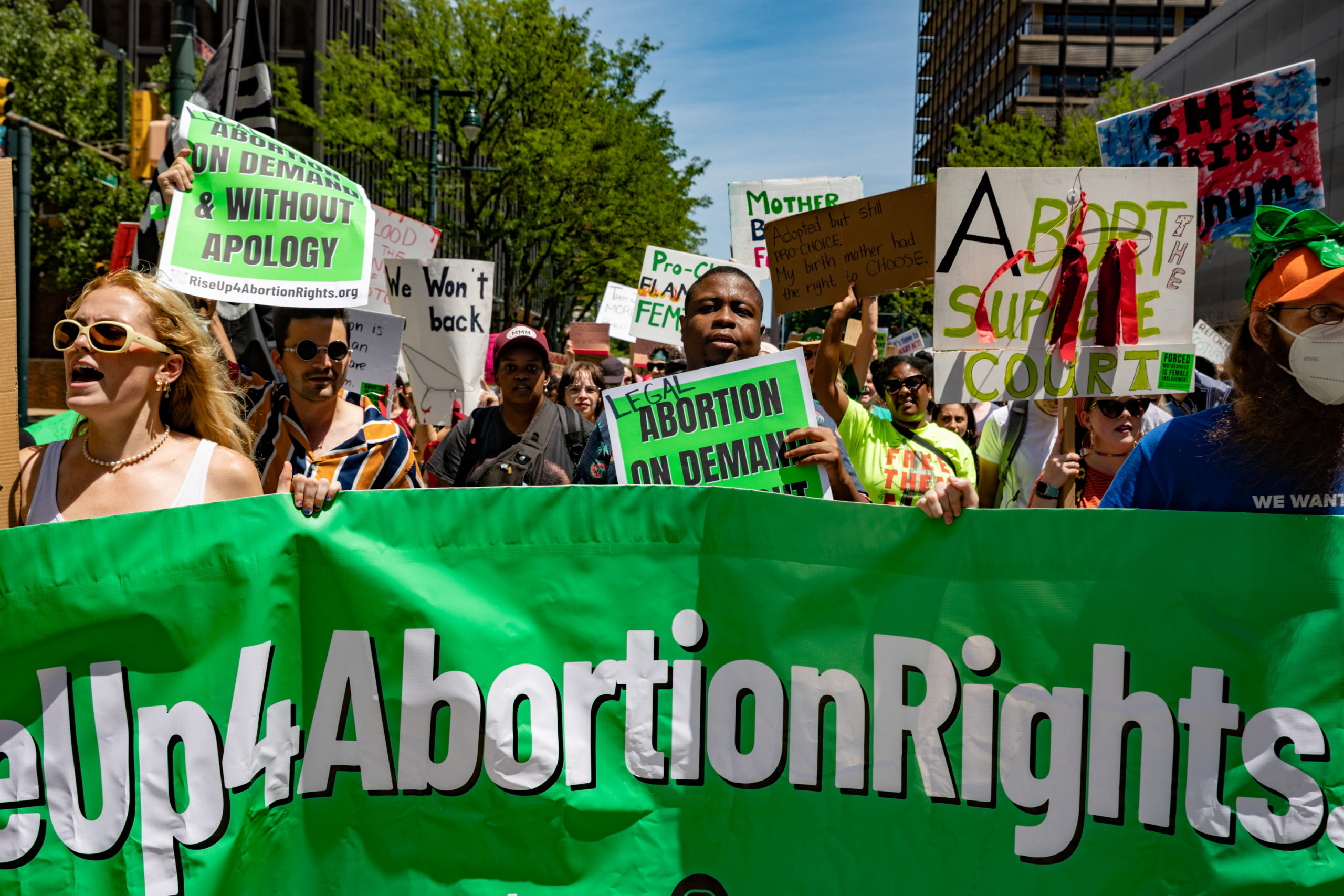 Protesters march behind a RiseUp banner at an Independence Day protest in Philadelphia, Pennsylvania. (Photo by Hannah Beier/Getty Images)

On its main fundraising portal, RiseUp states that it is sharing certain “tools” with Refuse Fascism until RiseUp “establishes infrastructure” for fundraising of its own. RiseUp’s PayPal fundraising account also includes the name of TWCW. Refuse Fascism and TWCW share a New York City mailing address. (RELATED: Pro-Life Groups Sound The Alarm Over Repeated Attacks, Call Out FBI, DOJ For Not Doing Enough)

RiseUp’s website claims that the group spends donated funds on protest materials and logistics. Amid accusations of financial impropriety from other pro-abortion groups, RiseUp released a statement promising that it “has never used any funds it has raised for any purposes other than exactly what the funds were raised for.”

The RiseUp statement derided criticism of Taylor and Avakian as “scurrilous and false.” The RCP added that the accusations from other pro-abortion groups “smack strongly of the tactics of the right wing fascist forces in this country and the political police (the FBI, etc.) who create pretexts to go after revolutionary groups” in its own statement. The RCP flatly denied ever having used RiseUp funds in any capacity in its statement.

Taylor refused to say if RiseUp would submit to an independent audit of its financial dealings in order to clear up the accusations, and referred the Daily Caller to previous statements on the matter. Neither RiseUp nor the RCP disclosed documentation in response statements to definitively disprove the allegations of impropriety.

The RCP centers on Avakian’s revolutionary ideology, which RCP materials refer to as “new communism.” Critics, including those who signed the June statement against RiseUp, have claimed that the RCP is a Maoist group that elevates Avakian and his teachings as messianic. The late June statement from pro-abortion groups opposed to RiseUp asserted that the RCP established RiseUp as a front to divert funds and people towards the growth of its ideology rather than earnestly supporting the pro-abortion cause.

“There will be individuals who use this division and deep and wide disappointment with the Dobbs decision to not only stake claim with regard to abortion rights, but also to make their overall failed political worldview an attractive option” to naive demonstrators, Levin said.

RiseUp has become one of the most visible pro-abortion groups in the United States. Democratic New York Rep. Alexandria Ocasio-Cortez joined RiseUp demonstrators in protest the day of the release of Dobbs. Taylor held a megaphone to Ocasio-Cortez’s face while the congresswoman led chants calling the Supreme Court illegitimate. Several protesters, including Taylor, have been spotted and photographed wearing RCP merchandise at RiseUp demonstrations.

This court is Illegitimate and this decision must not stand. Legal, Nationwide abortion on demand!

Get in the streets NOW. AND TOMORROW and the next day! Post Roe? HELL NO! pic.twitter.com/w6qVAsRyoC

The group has appeared at many demonstrations across the country since its inception, and has received attention from the press and celebrities. Hillary Clinton promoted a RiseUp protest on Twitter in early May. Hollywood social justice warriors Mark Ruffalo and Rosanna Arquette have publicly supported RiseUp, according to its website. MSNBC even broadcast an interview with two young RiseUp activists. (RELATED: School District: Berkeley Riot Organizers Tried To ‘Brainwash’ Students Into Left-Wing Activism [VIDEO])

If you’re in New York this afternoon, join grassroots organizers in support of abortion rights at Foley Square. pic.twitter.com/U1tjEaC0Jd

“My rights should not be a fundraising point for them.” Zoe Warren and Julianne D’Eredita of @riseup4abortion speak to @yasminv about their frustration with the Democratic party and concerns for the future after Roe. pic.twitter.com/zbmRIpatwg

RiseUp protesters deploy unique tactics, including smearing red paint over their private parts. They also paint green handprints over the chests of protesters wearing white. Doing so represents “a facsimile of what would happen to actual living women, hemorrhaging to death from unsafe abortions,” one RiseUp activist explained to the Daily Caller at a recent protest in front of the Supreme Court. 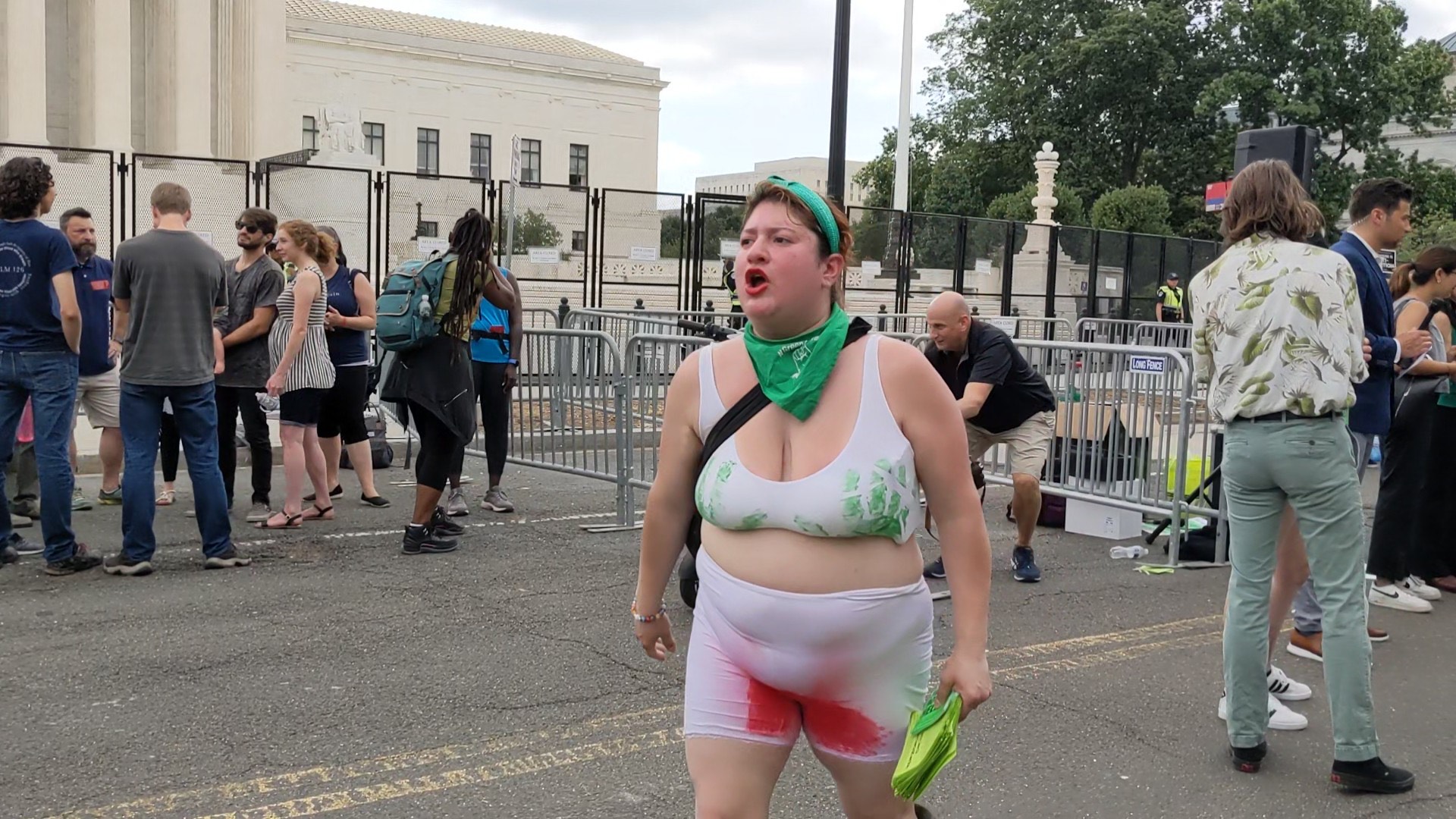 “These are opportunists who are trying to take advantage of people of good will who have deeply held, sincere beliefs with regard to the right to abortion,” Levin concluded.

None of the signatories of the statement in opposition to RCP that were contacted returned the Daily Caller’s request for comment.