The leader of a conservative watchdog group said Arabella Advisors, a Democratic dark money juggernaut, had security remove her from their office on Monday morning after she made an in-person request for nonprofit tax documents Arabella is legally required to provide.

Arabella has been called the “mothership” behind a network of Democratic dark money nonprofit groups that have raised a combined $3 billion from mostly anonymous donors as of 2019. Arabella’s dark money network includes the Sixteen Thirty Fund, which funneled millions into a left-wing effort to stop Supreme Court Justice Brett Kavanaugh’s confirmation in 2018, and the New Venture Fund, which helped bankroll a group that launched a local news network in 2019 that, according to Bloomberg, functions as “political instruments designed to get them [readers] to vote for Democrats.”

Arabella is required, as of Monday, to make copies of Form 990s covering the 2020 financial activities of its dark money groups available the same day anyone requests the records at their office in person, Americans for Public Trust (APT) Executive Director Caitlin Sutherland told the Daily Caller News Foundation.

But Sutherland said a pair of Arabella staffers who were present at one of Arabella’s Washington, D.C., offices on Monday morning refused to provide her with copies of the Form 990s and called security to remove her from the building empty-handed within five minutes of her arrival.

Arabella general counsel Saurabh Gupta told APT’s outside counsel in an email after the incident that Arabella’s offices were closed Monday morning.

The incident occurred less than two weeks after Arabella CEO Sampriti Ganguli told The Atlantic on Nov. 2 in no uncertain terms she was committed to staying in compliance with all laws on the books. (RELATED: Inside The Dark Money Dem Group Using An Umbrella Network To Flay Trump Over His Virus Response)

“Just a few weeks ago, Arabella Advisors’ CEO stated they were ‘compliant with all of the laws as they are.’ Well, the law required them to hand over these dark money tax returns, and they failed to comply,” Sutherland told the DCNF. “Instead, they are willfully skirting the law and delaying the release of documents that will show how hundreds of millions of dollars were spent to influence public policy and elections.”

Nonprofit groups that fail to produce copies of Form 990s the same day an in-person request face possible IRS fines of $20 per day, up to a maximum fine of $10,000, Sutherland explained, citing federal law.

Arabella states on its website it manages three 501(c)(3) charity groups — the New Venture Fund, the Hopewell Fund and the Windward Fund — as well as the Sixteen Thirty Fund, a 501(c)(4) social welfare nonprofit group. As such, Arabella’s Fund groups are not required to disclose the identities of their donors. 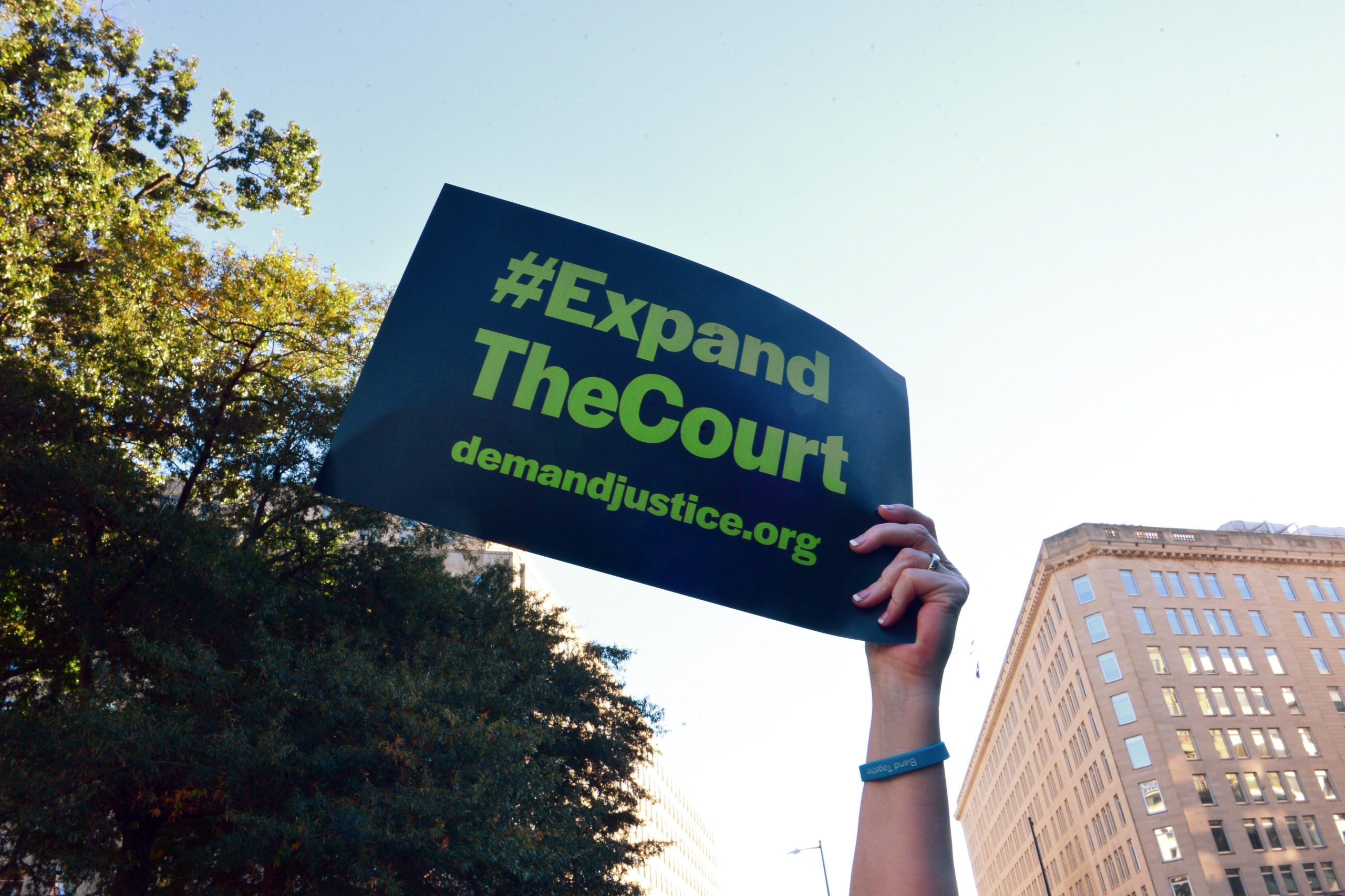 Volunteers with Demand Justice rally for seats to be added to the Supreme Court on October 27, 2021 in Washington, DC. Demand Justice is run by the Sixteen Thirty Fund. (Shannon Finney/Getty Images for Demand Justice)

Minutes after Sutherland’s removal from Arabella’s office on Monday morning, APT’s outside counsel demanded Gupta provide Sutherland with copies of Form 990s for its dark money groups, according to email communications shared with the DCNF.

“Arabella’s offices are currently closed due to COVID-19 protocols,” Gupta responded, adding that he would provide Sutherland with the records within “a reasonable time,” the emails show.

Sutherland scoffed at Gupta’s statement that Arabella’s office was closed on Monday, noting that, in addition to personally interacting with Arabella staffers at their office that day, The Atlantic had described the same office less than two weeks prior as a “trendy co-working space … where people wear Chucks and fuss about fancy coffee.”

APT’s outside counsel then reiterated to Gupta in a follow-up email that Arabella is obligated to comply with Sutherland’s request by the end of Monday and that noncompliance would be met with an IRS complaint.

“I will gladly accept electronic copies of 990s today but I will not allow you to deny that an in-person request was made and that you are obligated to produce those records today,” APT’s outside counsel wrote to Gupta. “Should you fail to produce these records today, unfortunately, we will have no other recourse than to file complaints with the IRS and ensure that the public is aware of your noncompliance.”

Gupta said in response on Monday evening that he had mailed copies of the requested 990s to APT’s outside counsel. Sutherland said she has yet to receive the records as of late Tuesday afternoon.