White House Senior adviser Anita Dunn has consulted for companies and trade groups that have benefited or stand to benefit from federal funding and is being forced to recuse herself from matters involving them, according to a financial disclosure.

Dunn has consulted through the public affairs firm SKDK during the past two years for the likes of Pfizer, AT&T, Micron and the American Clean Power Association, according to a filing reported on by CNBC Friday. Dunn, who founded the SKDK in 2004, is recused from working on issues related to past clients, a spokesman for the White House told the Daily Caller News Foundation. (RELATED: EXCLUSIVE: Biden Admin Sued For Keeping Top Officials’ Ethics Waivers A Secret)

“Both White House ethics officials and OGE reviewed and certified Ms. Dunn’s financial disclosure report (OGE Form 278), and, as is customary for all new employees, she has received rigorous counseling regarding her recusal obligations,” said White House spokesman Chris Meagher. “In addition to statutory/regulatory requirements, she is recused under the Ethics Pledge from participating in any particular matters involving SKDK and any clients that she worked for in the previous two years.”

One of Dunn’s clients, Pfizer, inked a $3.2 billion COVID-19 vaccine deal with the Biden administration in June to deliver 105 million doses this Fall. The company, along with others, has been at the forefront of the vaccine rollout effort during the Trump and Biden administrations.

“AT&T commends the Administration and Congress for paving the way for universal connectivity to unserved areas, making broadband affordable for low-income households, and providing more resources for digital equity and adoption,” the company’s CEO John Stankey said in a statement upon the package being signed.

“With the anticipated grants and credits made possible by the CHIPS and Science Act, this investment will enable the world’s most advanced memory manufacturing in America,” Micron, which Meagher told the DCNF was briefed on Dunn’s recusals, said in a statement released the day Biden signed the bill.

The American Clean Power Association (ACPA), a renewable energy trade group, notably applauded the senate’s passage of the Democrat-led “Inflation Reduction Act” (IRA) which allocates $370 billion toward green energy initiatives. The ACPA’s CEO called the Inflation Reduction Act a “historic moment” Friday and said it was “grateful” of the White House and Congress for pushing the bill.

“It’s disturbing that someone with so many potential conflicts is able to play such a prominent role in the administration,” Michael Chamberlain, director of the ethics watchdog Protect the Public’s Trust, told the DCNF. 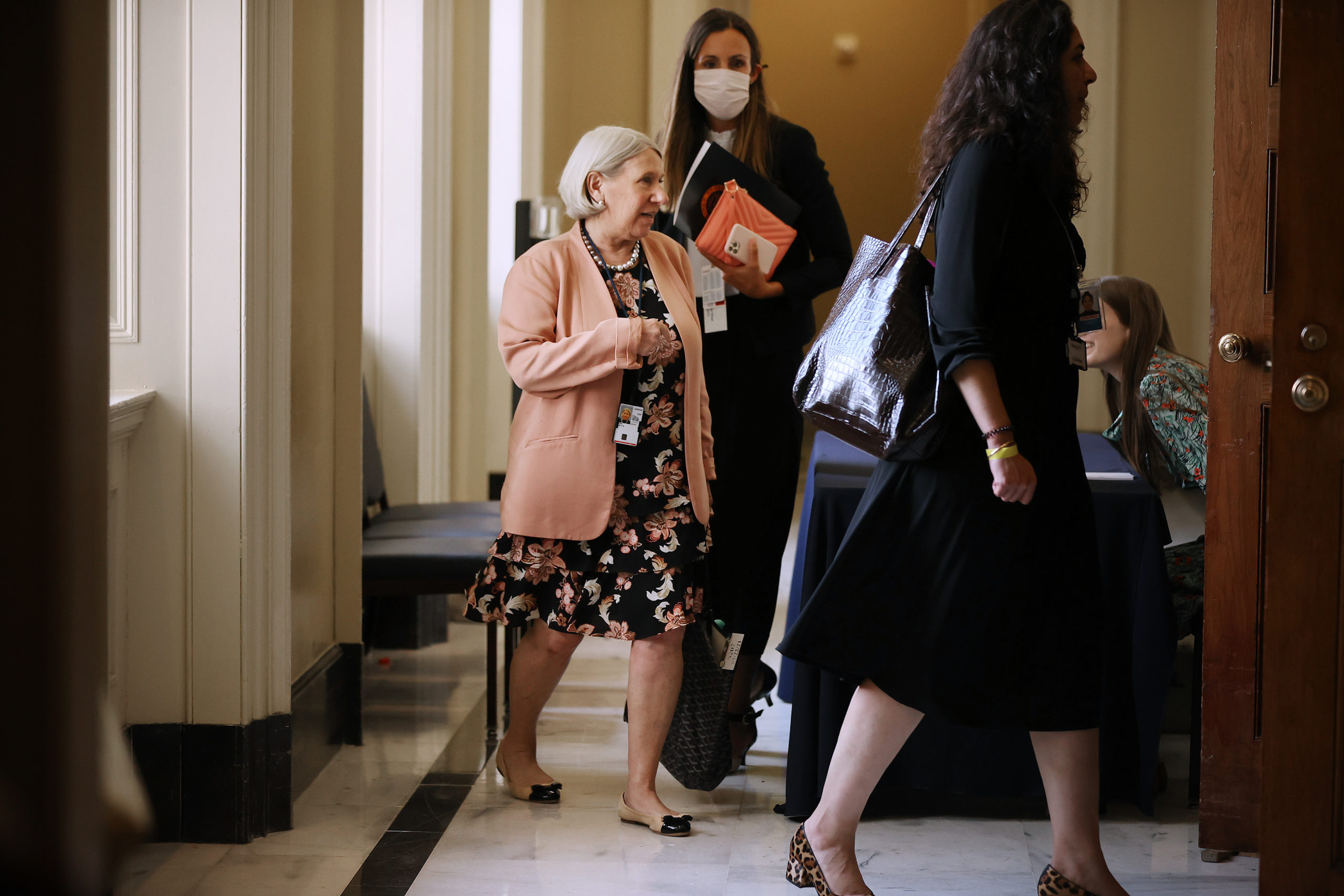 WASHINGTON, DC – JULY 22: Anita Dunn, senior advisor to President Joe Biden, arrives for a lunch meeting with Senate Democrats at the U.S. Capitol on July 22, 2021 in Washington, DC. Dunn is meeting with the senators to to help them push back against Republican accusations that the president’s Build Back Better agenda is reckless spending. She suggested Democrats highlight the budget’s ‘child tax credits, lower prescription drug costs, universal pre-school’ and as a tax cut for middle class families. (Photo by Chip Somodevilla/Getty Images)

Dunn, who came on full-time as a White House adviser in April after serving as a temporary employee, has earned over $738,000 in the last two and a half years from her time at SKDK, according to the disclosure. It is unclear what specific issues she was consulting the groups on.

Dunn’s financial disclosure also showed an investment portfolio worth between $16.8 million and $48.2 million. However, she is divesting the portfolio to avoid any conflicts of interest, said Meagher.

“Ms. Dunn’s financial holdings were managed by an outside investment manager and pre-date her current position,” Meagher told the DCNF. “Now that she is a full-time White House employee, she has the appropriate recusals in place and will follow all applicable divestiture requirements.”