As time runs out for railway unions and railway companies to avoid a strike before a Friday morning deadline, logistics experts who spoke to the Daily Caller News Foundation warned that a rail strike would have a “ripple effect” that would negatively impact every facet of the U.S. economy.

Two of 12 major railway unions have yet to sign an agreement with rail companies, citing concerns regarding sick days and attendance, while a third saw its members vote down the agreement on Wednesday despite the White House-brokered deal including a record-breaking 24% pay hike over the next five years, according to the WSJ. Should the unions strike on Friday, it could prompt 7,000 long distance daily freight trains to be left idle, representing nearly 40% of all long distance trade in the United States, the largest of all forms of transit, according to CNBC.(RELATED: ‘$2 Billion Daily’: Potential Rail Strike Threatens Weakened Economy)

Even a short strike would have a long-term detrimental impact on the U.S. supply chain, potentially leading to delays and elevated prices for consumers that could last for several months, Beth Davis-Sramek, professor of supply chain management at Auburn University and editor of the Journal of Business Logistics, told the DCNF. In the event that trains stop running, shipping containers would pile up at ports, causing “incredible headaches” for a trucking industry that is already facing shortages and a “ripple effect” that would be felt throughout the U.S. economy.

These delays at port would occur because modern supply chains increasingly use shipping containers that are not unpacked at ports, Davis-Sramek said. Instead, entire containers are loaded directly from ships to trains, and from trains to trucks, as part of a process known as “intermodal” shipping.

“The long term impact will depend largely on how long the strike might last, and whether Congress intervenes,” said Davis-Sramek. If companies don’t have enough inventory to cover demand during the time of a strike, then goods could see dramatic price increases, gasoline in particular, Davis-Sramek said.

Replacing these trains with trucks would require 460,000 trucks, an impossibility based on existing equipment and an ongoing shortage of about 80,000 truckers, according to the American Trucking Associations (ATA) in a Sep. 9 letter to Congress urging action. John Esparza, president and CEO of the Texas Trucking Association (TXTA), said that he believes the ATA’s estimate is “very conservative,” and that shortages are likely to increase in the near future as older truckers retire and the industry struggles to attract young replacements, in an interview with the DCNF.

“There’s a demographic issue with drivers, when a driver gets too old and their license is taken away, they’re effectively forced to retire,” said Esparza. “This is a growing problem. We have a limited ability to meet these needs.”

A rail strike resulting in a stoppage of rail services could also cause $2 billion dollars per day in lost productivity across the entire U.S. economy, according to a report by the Association of American Railroads (AAR), which represents the rail companies. The report also highlighted the importance of rail to international trade, noting that internationally traded goods account for 40% of all carloads in the U.S. rail system.

The economic consequences of the impending strike are already being felt, as some rail companies halted agricultural shipments starting Thursday, according to Reuters on Tuesday, citing sources familiar. While most corn for ethanol arrives at plants by truck, around 70% of all ethanol in the United States is transported by rail, according to the AAR.

On Wednesday, Amtrak cancelled all long-distance trains, beginning Sept. 15 on Wednesday. While Amtrak employees were not involved in the strike, the track on which almost all long-distance Amtrak trains outside of the Northeast Corridor (NEC) run is operated by freight companies whose employees are. 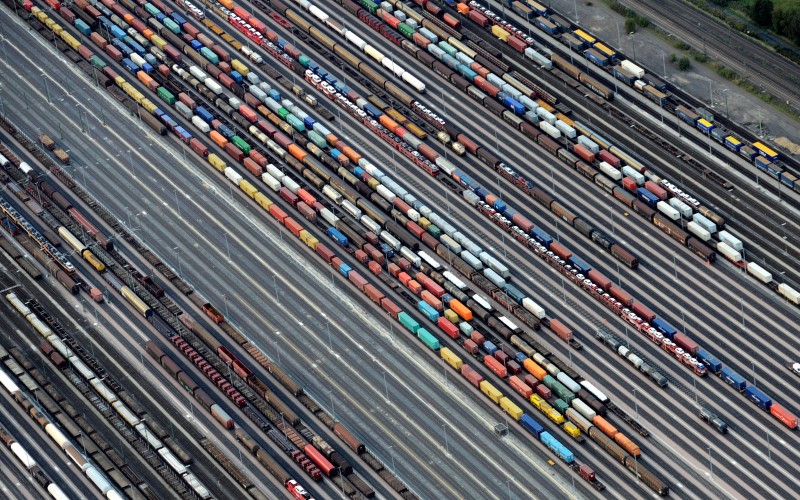 Prior to this, the AAR announced Sept. 9 that freight customers ought to anticipate delays or suspensions due to the labor negotiations. In particular, the organization announced that it was taking steps to secure hazardous materials such as chlorine for drinking water and fertilizer chemicals, and asked the unions to come to the bargaining table and accept “historic wage increases” to prevent “disruption to the struggling supply chain.”

The final two unions yet to reach an agreement with rail companies accused carriers of cancelling certain shipments to squeeze supply chains and “provoke congressional action,” in a joint statement on Sunday by the Brotherhood of Locomotive Engineers and Trainmen (BLET) and SMART Transportation Division (SMART-TD). The unions asked Congress to not cave to “corporate terrorism,” and criticized the rail carriers’ policies as harmful to the industry and making it more difficult to recruit new workers.

The unions alleged that employees had been fired for being sick or going to the doctor’s office, and that rail policies were “destroying the lives” of workers, in their statement. While the AAR repeatedly declined to comment on the potential impacts of a strike beyond its report, in a statement shared with the DCNF it accused unions of misrepresenting the issue of sick days, and noted that employees were allowed to use “mark off” days for any purpose, including medical, so long as they maintained a “reasonable level of overall availability.”

The Biden administration proposed a compromise between unions and rail companies through a committee known as the Presidential Emergency Board, which has since been accepted by 10 of 12 major rail unions, according to the WSJ. President Joe Biden personally spoke with both holdout union heads and rail companies on Tuesday in an attempt to resolve the dispute.

Biden initially imposed a strike moratorium in July, but it will run out at 12:01 a.m. on Sept. 16. Any further extension would need to be approved by Congress.

SMART-TD, BLET, the White House and the ATA did not immediately respond to a Daily Caller News Foundation request for comment.