Over the last decade Xi Jinping has purged political rivals, eliminated laws meant to check his power and birthed a cult of personality all in preparation for the coming assembly, where the 69-year-old dictator is expected to permanently cement his position atop the CCP’s hierarchy, experts told the DCNF. Xi now stands at a crossroads: he may be reelected for a third term, or he might alter the constitution yet again and become the first Chinese leader to adopt the title “chairman” since the position was eliminated in 1982 — a role which would effectively elevate Xi beyond all legal bounds.

“I don’t see any major political obstacle to his ascension to a longer-term supreme leader position, provided that he wanted to,” Miles Yu, director of the Hudson Institute’s China Center and former China policy adviser to Secretary of State Mike Pompeo, told the DCNF.

After securing reelection during the 19th Party Congress in 2017, Xi weaponized the law in 2018 to repeal a constitutionally-mandated restriction barring leaders from serving more than two terms. He could direct the congress to further alter the constitution to resurrect the “chairman” designation for himself, a move that would place him on par with Chairman Mao Zedong as China’s only leaders to wield ultimate decision-making authority, according to The Economist.

Much like Mao, communist China’s revolutionary forefather, Xi has consolidated his power through a series of political purges that began shortly after he became the CCP’s general secretary during the 18th Party Congress in 2012. Xi’s ensuing “anti-corruption” efforts have led to more than 8.58 million arrests, according to Chinese state-run media. (RELATED: China’s Xi Jinping Unironically Publishes Treatise On Human Rights)

“He has purged a lot of his political opponents, real and perceived, in the last 10 years or so — more than anybody since Mao,” Yu said.

The purges have netted high-profile officials such as the head of the Political and Legal Affairs Commission, the party secretary of Chongqing, the vice chairman of the Central Military Commission, the director of the General Office of the CCP and, most recently, the Justice Minister himself, leaving few people willing to challenge his authority.

Ripping another page from Mao’s playbook, Xi has taken pains to birth a cult of personality, beginning in 2017 when he altered China’s constitution to include Xi Jinping Thought — which among other things aims for “socialist modernization.”

More recently, Xi directed the CCP to release a “resolution” casting himself as a national savior and resurrected the term “Great Helmsman,” which had been reserved for Mao.

“He’s re-written the rules for exactly this,” Dan Harris, an attorney at the Harris Bricken Sliwoski law firm who specializes in Chinese law, told the DCNF.

While Xi obtaining the title of party “chairman” is not guaranteed, it “would be consistent with the groundwork he has laid thus far,” Denny Roy, senior fellow at the East-West Center, told the DCNF. 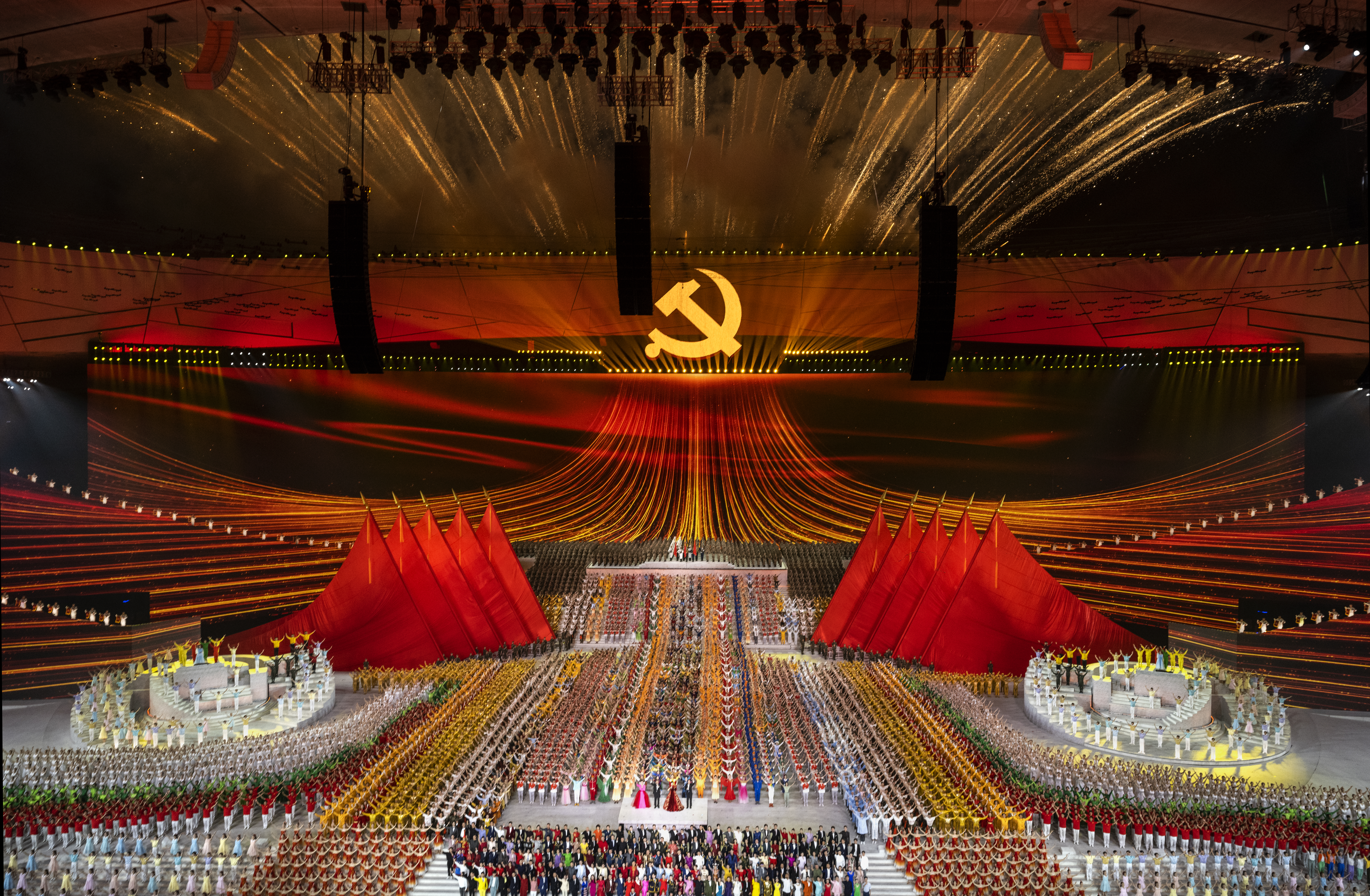 Yet, even as Xi appears positioned to secure power indefinitely, growing opposition to his policies and China’s slowing economy may hamstring his ability to fully enact his long-term agenda to elevate China to the status of a global superpower, experts told the DCNF.

CCP propaganda markets Xi’s personal power grabs as serving the “Chinese Dream” — the overarching propaganda campaign he unveiled in 2012 promising “the great rejuvenation of the Chinese nation” and moderate prosperity for all. However, disillusioned citizens have traded the “Chinese Dream” for “lying flat” — a social phenomenon in which individuals consciously reject China’s grueling work environment in exchange for lower living standards.

“Lie flat is the only thing they can do,” Jennifer Zeng, host of the Inconvenient Truths show, told the DCNF.

China’s social discontent is not limited to feelings of apathy. Xi’s Zero-Covid contact tracing and lockdown policy, first implemented around June 2020 to quell the pandemic, has also resulted in widespread protests, rioting and looting.

“Zero-Covid is not popular among the elite and elicits discontent,” Florida Republican Sen. Marco Rubio told the DCNF.

Yet, in doing so, he may also have jeopardized his goal of national prosperity. The Zero-Covid policy deepened a preexisting debt crisis — epitomized by a $305 billion default by China’s largest real estate developer — and led to the weakest economic growth in recent memory.

Xi will face an uphill battle restarting China’s economy, Yu told the DCNF. Xi’s recent economic agenda has met with unforeseen challenges, especially in the face of his bid to curtail the international investment that had contributed to China’s meteoric rise in recent decades.

Despite the economic cost, Xi would prefer to oust foreign investors, as he considers foreigners as “potential checks on his influence,” Harris said. For Xi’s party, the “focus is on power and control.”

“Long-term, the Party expects Xi to steer China through the economic transition” from an economy deeply intertwined with the international system to the “dual circulation” model that grounds China’s economy in domestic consumption and innovation, said the East-West Center’s Roy.

However, by continuously prioritizing power and control, Xi may also have to pare back his more ambitious “pet projects,” Yu, the former Pompeo adviser, explained. Xi’s 2013 Belt And Road Initiative was intended to spread Chinese economic and cultural influence across the globe, but has gone sour as countries have wizened to its predatory methods, with some labeling it “debt trap diplomacy.”

In addition, Western countries increasingly seek to distance themselves from China in reaction to violations of international law including rampant intellectual property theft and even the use of Uyghur slave labor. (RELATED: China Recruited Scientists Who Worked At Top US National Security Lab, Report Says)

Western countries “see China as an authoritarian and aggressive regime” and are moving to “decouple” from its vast economy, said Harris, the Chinese law specialist.

“Because of a broad, global, pushback against China’s expansionism — mostly led by the Trump administration — [Xi] is beginning to realize there are limitations to his ambition,” Yu said. The U.S. and its allies regard the CCP as “the primary threat to global commerce and to world peace.”

Under Xi, China has grown increasingly belligerent toward Taiwan, which experts say the CCP is intent on subjugating. Although China has often called for “peaceful reunification” with the democratically-ruled island, Beijing does not rule out “reunification-by-force” having repeatedly stated that “reunification” is a prerequisite for national rejuvenation and should occur before communist China’s 100th anniversary in 2049.

China is expected to invade Taiwan, possibly as “a way to bring stability and unity at home” by galvanizing nationalist sentiment to counter popular unrest, Michael Sobolik, a fellow in Indo-Pacific studies at the American Foreign Policy Institute, told the DCNF.

“This is why the United States must immediately prioritize the Indo-Pacific — starting with beefing up Taiwan’s defenses — and make countering the Chinese Communist Party the overarching goal of our foreign policy,” Sen. Rubio said. “Although Washington has adversaries around the world, none of them compare to the threat of the Chinese Communist Party, especially run by an emboldened Xi.”