Comedian Bill Maher said on an upcoming episode of his “Club Random” podcast that teens talking about climate change should “shut the fuck up,” since they’re polluting just as much as Maher’s generation.

Maher and comedian Dana Carvey were discussing travel when Maher said he enjoys flying private and “the only people who don’t like private are the ones who can’t.”

Maher then added that climate activist Greta Thunberg is likely one of the few exceptions who would refuse to fly private in order to help the climate. 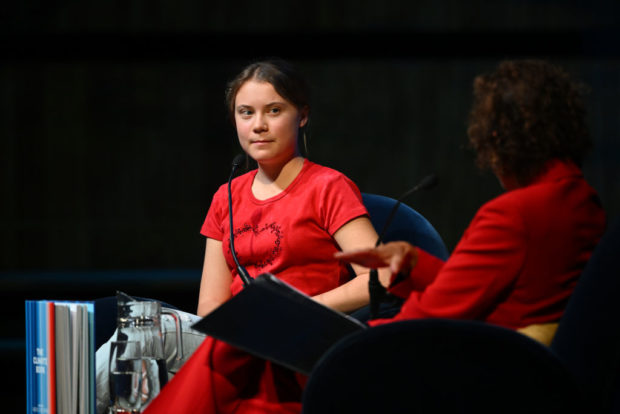 LONDON, ENGLAND – OCTOBER 30: Greta Thunberg speaks on stage during the global launch of “The Climate Book” at The Royal Festival Hall on October 30, 2022 in London, England. (Photo by Kate Green/Getty Images)

“I also think [Greta] is not representative of her generation, who love to like, blame us. ‘You wrecked the world!’ Yeah, like you’re doing it differently, like you’re not driving? Right, you’re just with Greta on a sailboat all the time. You’re using cars as much as we did, so shut the fuck up! You know what, we’re all decided that we’re just gonna drive over the Grand Canyon and have a great time on our way,” Maher said.

“And as long as that’s what we’ve decided, I’m not going to be the schmuck driving a three-foot car,” he added.

Maher lashed out at Thunberg and other members of her generation in 2021. He said the teen and “young people” should “shut the fuck up,” and that she doesn’t have that big of an influence over her generation in comparison to more popular figures.