The nation’s largest school districts are implementing policies that require educators to keep students’ gender transitions a secret from their parents.

Los Angeles Unified School District, Chicago Public Schools and New York Public Schools are promoting practices and policies that hide a student’s transgender status from their parents. The policies have become a cultural flashpoint amid a battle over the role parents should play in their child’s education, and the extent to which gender ideology has infiltrated K-12 classrooms. (RELATED: Parent Group Challenges School District’s Planned ‘Transgender Awareness Week’)

“Parents, not teachers or school administrators, are first and foremost responsible for the health and wellbeing of their children,” Alex Nester, investigative fellow for Parents Defending Education, a parental rights in education group, told the Daily Caller News Foundation. “School officials have no right to step into the place of parents in directing a child’s upbringing. And in doing so, they are sowing division between families and villainizing parents.”

Los Angeles Unified School District, the second largest school district in the nation with 565,000 students, has a “Gender Identity and Students – Ensuring Equity and Nondiscrimination” policy that tells educators to be mindful that a student may have not told their parents about their change in gender identity and be careful not to reveal the child’s gender status. Educators are advised to not reveal a student’s gender identity unless the student wants because the parent may not be “supportive of the student.”

Chicago Public Schools, which enrolls about 340,000 students, has a “guidelines regarding the support of transgender and gender nonconforming students” which requires a “student administrative support team” to coordinate action and support for transgender and gender nonconforming students. Parents are not required to be notified or involved in the process of the child’s transition at school, the guidelines stated.

The New York City Department of Education which oversees New York Public Schools, with more than one million students, released guidelines and protocols for transgender students that advised educators that some students do not want their parents to know about their gender status. Students do not need parental consent or a court-ordered name and gender change before changing their name and pronouns at school.

Montgomery County Public School in Maryland, which enrolls about 160,000 students, has a “Guidelines for Student Gender Identity” that stated that students have the “right” to keep their gender transitions a secret from their parents. Educators must “respect the right of students to keep their gender identity or transgender status private and confidential.”

“As the mom of a teenage daughter, she wasn’t allowed to go to the mall and get her ears pierced without her dad or I signing the consent form,” Laura Zorc, a former Florida school board member and executive director of Building Education for Students Together, a group focused on parental rights in education, told the DCNF. “Since I have the right to decide what goes in my daughter’s ear, it should be clear to all that parents have the right to direct the education and the upbringing of their children.”

Other school districts are following the larger school trend; in California, Sacramento Unified School District issued a guidance for “Transgender and Gender Non-Conforming Students” which advises schools and teachers to keep students’ transition status a secret at school. San Francisco Unified School District used a “LGBTQ Student Services” guidebook to coach teachers on how to avoid “outing” students’ in their gender transitions to parents. 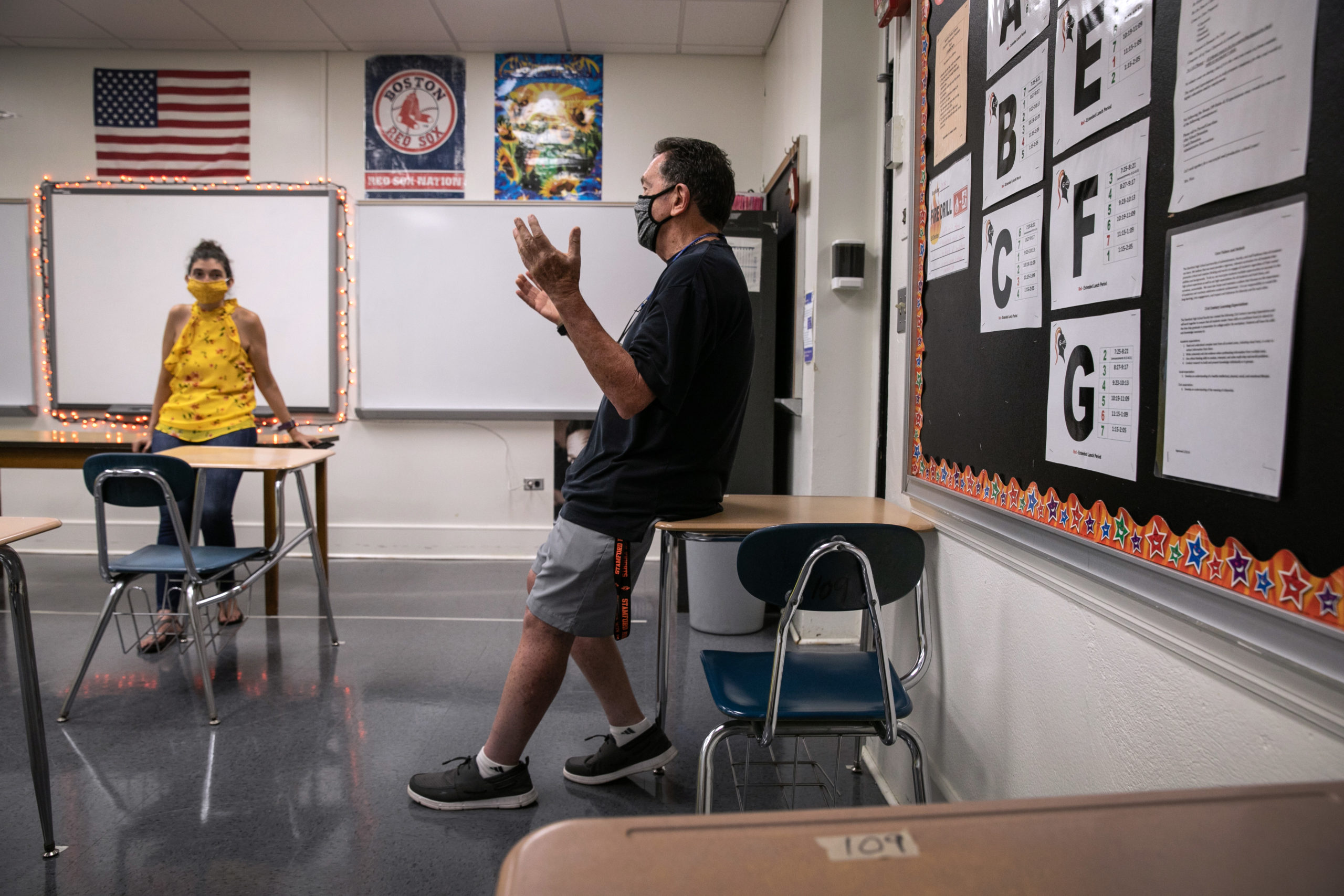 Teachers hold a socially distanced meeting in a classroom at Stamford High School on September 02, 2020 in Stamford, Connecticut. Due to the coronavirus pandemic, Stamford Public Schools are reopening for the fall semester on September 8 with a hybrid model, which includes in-class learning every other day. (Photo by John Moore/Getty Images)

Upper Moreland School District in Willow Grove, Pennsylvania, added a “Code of Conduct” for the 2022-2023 school year which tells elementary school teachers that they should not share if a student has or is making a change in their gender identity with the student’s parents unless instructed by the child. A presentation to the Charlotte-Mecklenburg School District Board of Education, which enrolls about 134,000 students, detailed district policy that stated that a student can request a name or pronoun change at school without parental consent.

The focus on implementing transgender policies is taking away from teaching students basic academics, Melissa Jackson, chief of operations for No Left Turn In Education, a grassroots organization that works to eliminate “indoctrination and politicization” in education, told the DCNF.

“Compassion and respect should be given to those students who identify as transgender but that does not mean that school districts should be suggesting, treating, counseling or diagnosing students regarding gender identity,” Jackson told the DCNF. “School districts engaging in these activities are completely usurping the rights of parents. Schools need to focus on increasing academic proficiency rates not stealing the innocence of our children. It’s a dark day in America when parents fear for the innocence of their child when they drop them off at school.”