Satellite temperature data measuring Earth’s lower atmosphere shows that 2015 only ranks as the third-warmest year on record, and not the warmest year as predicted by scientists relying on weather station data.

Climate scientists with the University of Alabama, Huntsville reported Tuesday the temperature anomaly for December 2015 was 0.44 degrees Celsius above the 1981 to 2010 average, fueled by an El Nino warming event. UAH scientist Dr. Roy Spencer posted on his blog that this “makes 2015 the third warmest year globally (+0.27 deg C) in the satellite record (since 1979).”

Spencer noted 1998 was still the warmest year on record, but added that since “2016 should be warmer than 2015 with the current El Nino, there is a good chance 2016 will end up as a record warm year…it all depends upon how quickly El Nino wanes later in the year.” 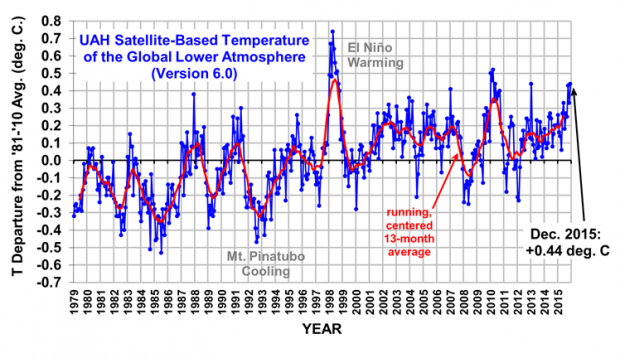 UAH satellite data comes after scientists with the National Oceanic and Atmospheric Administration (NOAA) reported “year-to-date temperature across global land and ocean surfaces was 1.57°F (0.87°C) above the 20th century average” which is “the highest for January–November in the 1880–2015 record.”

“The December global temperature would have to be at least 1.46°F (0.81°C) below average… for 2015 to not become the warmest year in the 136-year period of record,” NOAA reported last month in its global temperature update — based on weather stations, buoys and ships measuring Earth’s surface temperature.

Since virtually the beginning of 2015, scientists were predicting it would be the warmest on record, and, ironically, their predictions were confirmed by an El Nino warming event that appeared in late 2015.

El Nino’s are naturally-occurring events where the Pacific Ocean’s surface heats up while its depths get colder (the opposite happens during La Nina cooling events). El Nino years are often associated with warmer winter temperatures over the western and northern U.S., while the Gulf Coast and Florida see increases in rainfall. El Nino’s effects can last for months or even years.

Interestingly enough, insurers argue that El Nino has lessened natural disaster costs for 2015. An insurance industry group reported natural disasters caused $25 billion in losses in the U.S. in 2015, about $3 billion less than 2014.

“In 2015, strong tropical cyclones primarily hit sparsely populated areas or did not make landfall at all,” Peter Hoeppe, who heads up reinsurer Munich Re’s geological risks unit, said “In the North Atlantic, wind shear from the El Niño event helped to curtail the development of tropical cyclones, while measures to reduce loss susceptibility may have also had a positive effect.”

“However, scientists believe that in the coming year the strong El Niño phase might be followed by a La Niña event,” Hoeppe said. “A La Niña phase would promote the development of hurricanes in the North Atlantic, for example.”