“They took down his portrait at the Capitol but he deserves a lot worse than that.”

— CNN’s Jeffrey Toobin on ex-GOP House Speaker Dennis Hastert, who was sentenced to 15 months in prison Wednesday during which the judge referred to him as a “serial child molester.”

Ed Schultz has a new job

“What is wrong w/u? I’m under contract with CNN and have been since 2014. Stop spreading lies lady.” — Tara Setmayer, a CNN contributor and former press secretary to Rep. Dana Rohrabacher (R-Calif.), to a follower who insisted she wasn’t yet working for CNN Prez Jeff Zucker.

“Gonna ask the 7-11 guy who his VP pick is. Then my sister. Got a doc appointment at 3. I’ll ask him too. Apparently everyone gets one today.” — Craig Mazin, Cruz’s college roommate.

“Character is revealed in the lyrics of weird songs we make up and sing to other people’s kids. …I sat in horror.” — BuzzFeed Washington Bureau Chief John Stanton.

“The entire BuzzFeed DC office may or may not have stood up in pure disbelief and joy when Fiorina started singing.” — BuzzFeed‘s Tarini Parti.

“Down the street at Daily Beast HQ we just froze.” — The Daily Beast‘s Jackie Kucinich.

HuffPost politics and immigration reporter weighs in on Edible Arrangements

“In a mere 12.5 hours, a man is going to stick a bunch of needles in my fucked up back.” — Lauren O’Neal, senior editor, Midnight Breakfast.

Dr. Drew’s “Loveline” radio show ends. But there are still plenty of places to see and hear him…see here.

“If you told me ‘Melania Trump has never been awake for longer than six hours at a time’ I would say yes okay that sounds accurate.” — Gawker‘s Ashley Feinberg.

Dana Milbank thanks his friends on Facebook (the rest of you can, well, you know who you are…)

“Thank you for the birthday greetings, my friends! (And now that I’ve culled my Facebook friends on this private page, you actually are my friends. Except for a few of you. You know who you are.) I am off to celebrate by watching Donald Trump give a foreign policy speech at the Mayflower Hotel — the most exciting development there since Client 9 checked out.” — WaPo columnist Dana Milbank. 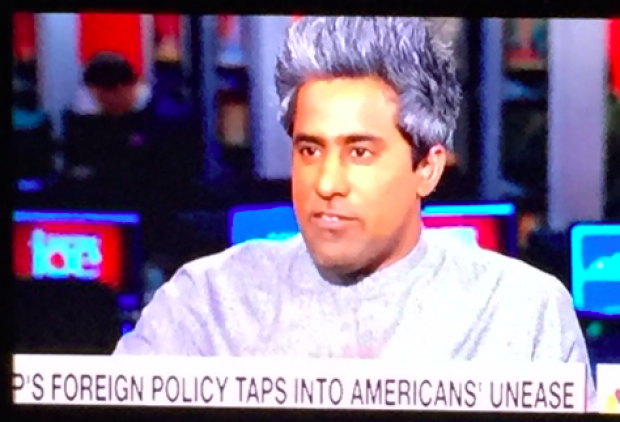 Anand Giridharadas, a columnist for the NYT and author of The True American, turned up again Thursday on “Morning Joe” with his Iman Shumpert hairdo.  Joe Scarborough brought up the “hair wars” first raised by The Mirror. Mika Brzezinski wanted to know, “Was it mean?” Anand replied that it was not. Joe admitted he’s jealous of Anand’s do.

Later in the “What Did You Learn Today?” segment, Anand came out with this whopper: “I learned that Ted Cruz chose to double down on all his worst personal traits in picking someone as his running mate.”

A coworker wrote to remark on Anand’s attire: “He took MSNBC’s dress code to the hilt. Just crushing a sweatshirt.”