The Obama administration’s new program to work with local and state law enforcement on deportations has resulted in a dramatic decrease in interior immigration enforcement, government data reveals.

Detainer requests to local and state law enforcement are down across the board for aliens who have committed violent, drug, and sex crimes. The data comes from Syracuse University’s Transactional Records Access Clearinghouse which obtains government statistics through Freedom of Information Act requests. A detainer request is when Immigrations and Custom Enforcement (ICE) asks a state or local jail agency to hold an alien in custody so ICE is able to take them into custody.

Immigrants who have been caught crossing the border illegally are housed inside the McAllen Border Patrol Station in McAllen, Texas, in this file photo taken July 15, 2014. REUTERS/ Rick Loomis/Pool/Files

ICE shifted from the Secure Communities program to the Priority Enforcement Program (PEP) in the beginning of Fiscal Year (FY) 2015. In FY 2014, ICE had 159,210 requests to local and state law enforcement agencies to detain non-citizens for up to 48 hours. That number dropped 41.3 percent to 95,085 in FY 2015.

The purpose of the PEP is to focus on deportations of aliens who have committed serious “Level 1 offenses.” But, comparing FY 2014 and FY2015, data shows a decrease in detainer requests for aliens who have been convicted of assault, driving under the influence, selling cocaine, robbery, and sexual assault. The amount of detainer requests for aliens convicted of murder dropped from 603 to 343, a 43.2 percent drop. 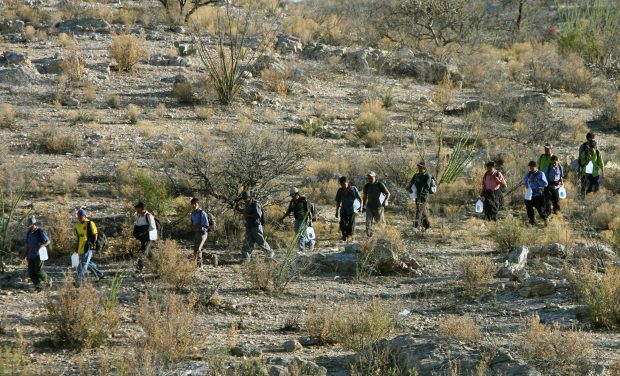 Mexican immigrants walk in line through the Arizona desert near Sasabe, Sonora state, in an attempt to illegally cross the Mexican-US border, 06 April 2006. While thousands of Mexicans try to cross the border daily from Sasabe city, the US Senate reached a breakthrough agreement on a legislation that would grant legal residency status to millions of undocumented workers in the United States. (OMAR TORRES/AFP/Getty Images)

At the same time as detainer requests have decreased, ICE “notices” have increased. With the announcement of the PEP, Homeland Security Secretary Jeh Johnson said that ICE is phasing out detainer requests and instead using requests for notifications. These are “requests that state or local law enforcement notify ICE of a pending release during the time that person is otherwise in custody under state or local authority.” (RELATED: ICE Gets Extra Billion To Deport Illegals, Deports 200,000 FEWER)

[dcquiz] While notices were supposed to replace detainers, ICE continues to use the latter. In November 2015, a year after PEP was put in place, ICE had 4,942 detainer requests and 1,204 requests for notice.