Cast members of the TV drama “The West Wing” are reuniting to campaign this weekend for Hillary Clinton.

On Wednesday, Ian Sams, a member of the Democratic presidential nominee’s campaign, tweeted a photo of several cast members from the Aaron Sorkin NBC drama about a Democratic president, along with information that many of the cast would be hitting the campaign trail for Clinton as she scales back her schedule for unknown reasons. (RELATED: Aaron Sorkin: Donald Trump Is A ‘Dangerous Situation’) 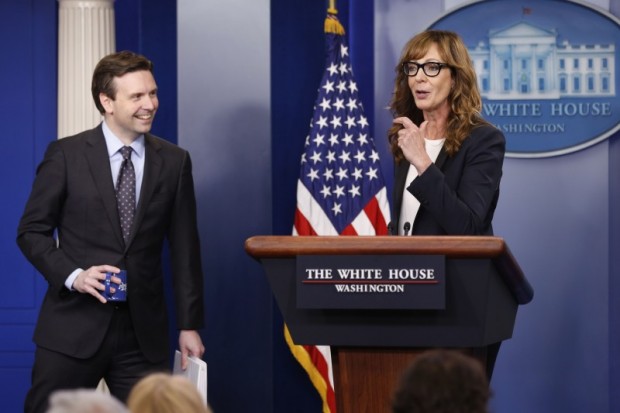 “NEW –> The gang is getting back together: the cast of The West Wing will campaign for @HillaryClinton  in stops across Ohio this weekend,” Sams tweeted. (RELATED: West Wing’ Star’s Response When Offered Job In Politics After Show Ended)

NEW –> The gang is getting back together: the cast of The West Wing will campaign for @HillaryClinton in stops across Ohio this weekend. pic.twitter.com/ZwyoIyiIDX

Stars of the show such as Allison Janney, Bradley Whitford, Richard Schiff, Joshua Malina and Mary McCormack will attend get-out-the-vote events, according to The Daily Beast, in Cleveland, Dayton, Toledo and Columbus.

“The actors will discuss why they are supporting Clinton and urge Ohioans to register to vote ahead of the October 11 deadline and to get involved in organizing their communities ahead of November’s election,” a statement from the campaign read, according to another report.

In June, Sorkin talked about the 2016 election and made it clear that he was voting for Clinton and was not a supporter of Donald Trump.

“And it feels to me like he [Trump] simply…Mrs. Clinton uses a gentle word when she says he doesn’t have the temperament to be in the White House,” Sorkin said. “And even if you don’t agree with Hillary Clinton, at least, you know she is a sober thinking person at least you are okay with her being near the football.”