If you’re a supporter of solid, honest journalism, you were outraged last week when Tucker Carlson kept interrupting Newsweek reporter Kurt Eichenwald in the middle of his nine-minute explanation for the following claim: 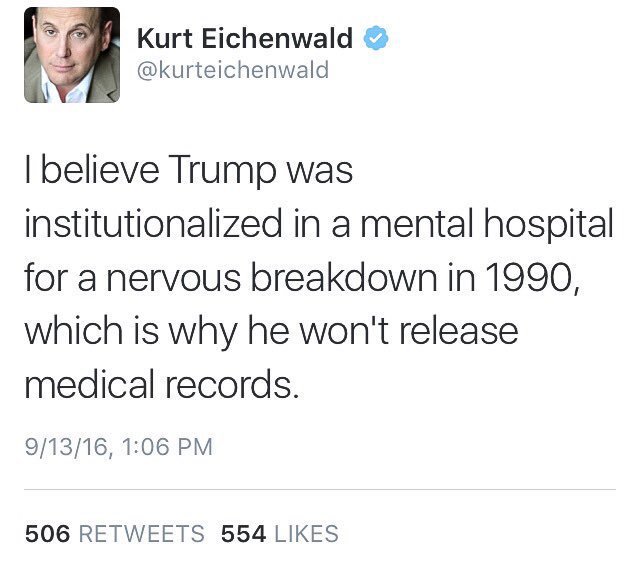 That was on Thursday. Later that evening, Eichenwald claims he suffered an epileptic seizure triggered by an animated GIF somebody sent him on Twitter. He’s vowing to track down the “son of a bitch” who’s allegedly responsible, although there seems to be some dispute about the progress of the police investigation.

Meanwhile, the most pressing question of all has gone unanswered, thanks to the meddling of that dastardly Tucker Carlson: Has Donald Trump ever been admitted into a mental hospital or not?

Now we finally have an answer, thanks to that paragon of journalistic integrity, George Stephanopoulos:

George Stephanopoulos: You’re done a lot of tough reporting on Donald Trump. Your Twitter feed is filled with comments about Donald Trump as well. One of them, you once said you believed Donald Trump had been institutionalized. You’re laughing about that now. Any regrets about that?

Kurt Eichenwald: There’s a long story behind it. When you go through the full fee(?) lead up to that tweet, there was a reporting purpose for that tweet going out. Which is more than you’re gonna want to hear about. I was making fun of Fox News and the rest who were doing “Hillary has seizures, Hillary has Multiple Sclerosis, Hillary has Parkinson’s, let’s go to Dr. Oz.” So, I was writing a series of jokes leading up to that, with the intent of sending that tweet, which was a signal to a source to talk to me.

This explanation makes perfect sense, and I agree with George’s choice to move to another topic. No need for any follow-up questions here. George’s journalistic instincts have always been unerring.

So there you have it. Kurt was just joking. Or something. It was a signal to a source. That makes perfect sense.