All eyes were on Sean Spicer as he held his first official press briefing from the White House on Monday. Despite concerns that he would keep things short or not take questions — he did both on Saturday — Donald Trump’s press secretary spoke with a diverse group of reporters for more than an hour. 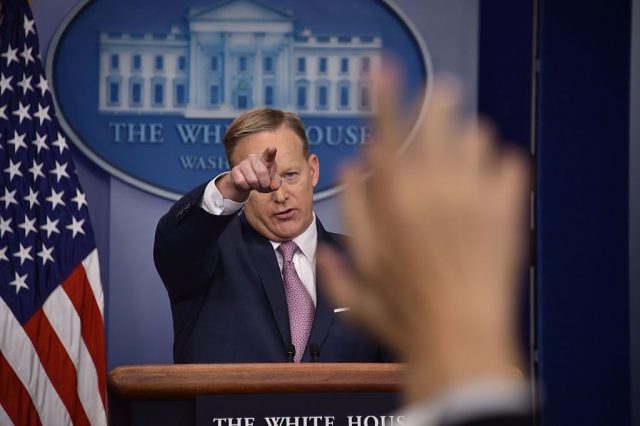 Afterwards, Spicer was praised by the left and the right on Twitter. (RELATED: Sean Spicer To Media Over Credibility Questions: ‘It’s a Two-Way Street’)

Sean Spicer is right to hammer away on the mistake over the MLK Jr. bust.

Takeaway: on Saturday Spicer's attitude signaled it would be impossible for press to cover the WH — fears allayed somewhat today

Props to Spicer for taking questions from reporters all over this room.

@rgm_l Why is it bad to appreciate Spicer taking ?s from a diversity of news outlets? Doesn't happen often and allows diversity of ?s

Skype seats for journos in briefing room is smart! @PressSec

Prediction: The media will endlessly focus on @PressSec repeating comments on "most watched" inauguration. Little on actual agenda.

To be fair: Spicer doing a better job and his suit fits better

Bravo Zulu to my friend Sean Spicer. That was the @seanspicer I know and respect today. Well done @PressSec

Spicer keeping his cool-actually doing a pretty good job, but u just know he's gonna end this thing & do a Beckham- punch a hole in the wall

Spicer is doing a good job first time out.

Sean Spicer did a fine job today on his first full day as WH spox. He is a good man. He was tough, fair, cordial, professional.

Think Spicer did well, tbh. Much better than Saturday, anyway.

And in fairness, Spicer was better informed than many journalists asking questions. Spicer asked a few questions, they didn't have answers.

Sean Spicer started off nervously, but after the Jon Karl question he really picked up and is doing better

Much better performance by @seanspicer. He's probably right too – total Trump inauguration audience very likely to be an all-time record.

Sean Spicer did quite a bit to gain back his own credibility today. Relaxed, bantering, stayed at podium longer than needed. Good 1st step.