In the final months of the outgoing Obama administration, Immigration and Customs Enforcement (ICE) officials began quietly hiding evidence revealing a huge increase in the number apprehended and incarcerated illegal aliens allowed go free, rather than face detention or deportation.

In addition to drastically increasing sanctioned catch-and-release cases during in the latter part of former President Barack Obama’s second term, ICE also changed its Freedom of Information Act (FOIA) policy to make its “already limited flow of data” on detainers and detainer-prompted deportations all but impossible to to obtain, according to a new Syracuse University Transactional Records Access Clearinghouse (TRAC) report.

“ICE is now withholding the very same types of data it previously released so that continued monitoring of its detainer program will be largely prevented,” according to TRAC, which said it had to file “hundreds” of FOIA requests, then appeal those requests and file a successful lawsuit to acquire the ICE detainer data.

ICE began leaving fields of information blank that it once “routinely” provided TRAC in response to monthly FOIA requests, with no explanation, the report said.

But once TRAC researchers obtained the data, it became apparent why the administration might try to conceal its practices about detainers. Detainers are written requests from ICE asking a local jail to detain a person for an extra 48 hours after release so that federal agents can take the person into custody for deportation.

The use of ICE detainers — a practice which grew under former President George. W. Bush and during Obama’s first term — as well as the number of detained people deported, plummeted in Obama’s last few years as president. In other words, ICE officials increasingly allowed arrested illegal immigrants to go free. Once ICE officials detained someone — an increasingly rare trend under Obama — they were far more likely to release that person. 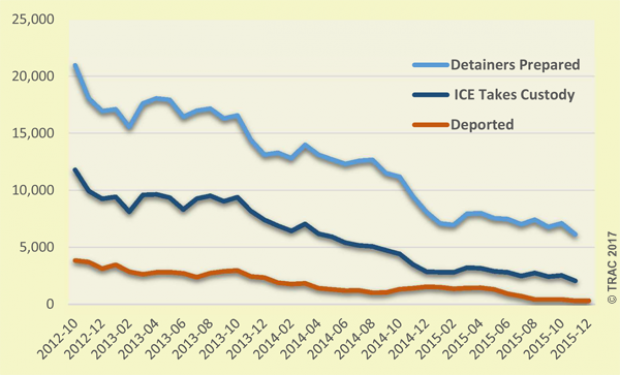 This is how deportations from detainers performed during Obama’s second term. Courtesy: TRAC

Detainers do not guarantee removal. ICE issued more than 5,000 detainers in December, 2015, the most recently available data, but only deported 341 of those people, according to TRAC. (RELATED: THOUSANDS Of Green Cards Have Disappeared)

Detainers are only one method for deportation. ICE made 235,551 total deportations in 2015, the most recently available data. (RELATED: ICE Data Shows Agency Is Less Productive Than It Has Been In Years)

In an unprecedented move, the ICE employee union endorsed now-President Donald Trump, who at the time promised to strengthen America’s immigration enforcement and let ICE agents do their jobs. TRAC expects ICE use of detainers to surge under Trump.

“Examining what detainers actually achieved and did not achieve during the Obama and Bush years is important because under the Trump administration’s recent flurry of immigration executive orders, it appears that the use of detainers is likely to surge,” TRAC said.