Over the weekend, CNN’s Jake Tapper accused me and The Daily Caller of “reveling in anti-Semitism.”

The charge came after I wrote up Milo Yiannopoulos‘s Dangerous book party last week that transpired in Manhattan. I detailed the “highlights” of the party. In other words, the things that stood out.

There was the Hillary Clinton dunk tank — partygoers took turns throwing a ball at a machine to submerge a woman who resembled Hillary — Jihadi strippers, chants of “F**k CNN,” and dancing midgets clad in yarmulkes, bris bibs and “Ben Shapiro” nameteags. (Shapiro is a former co-worker of Milo’s from Breitbart News.)

Much like a highlighter pen, these were the elements partygoers noticed most.

It is fair to say that this was a more raucous affair than my Bat Mitzvah, though, sadly, I was not there to “revel in” it.

But Tapper, who is also Jewish, didn’t see it that way.

To him, not only was I condoning anti-Semitism, but I was participating in it and so was The Daily Caller. He felt his 1.26 million followers should know.

I was verklempt. The most anti-Semitic thing I’ve ever done is break up with a boyfriend because he liked Borscht — as childhood memories of my father guzzling this concoction as a midnight snack was a permanent mood killer.

Honestly, I really didn’t understand what all his kvetching was about.

And neither did my coworkers.

Tapper snapped at one of my coworkers that he never called me anti-Semitic: “I never called her that, so I won’t defend it. The piece revels in Milo’s casual anti-Semitism. Period.” 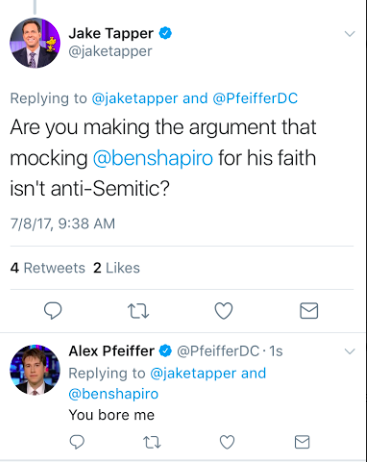 Period? This irritated Daily Caller blogger Jim Treacher, who also didn’t appreciate Tapper schvitzing all over The Daily Caller. “Bullshit is still bullshit, no matter which punctuation mark you use,” he wrote on Twitter.

Tapper did defend his remarks,  in various, persistent exchanges with me and my coworkers.

Pfeiffer told him, “It is her piece and the implication of your tweet is that she is down with anti-Semitism, which is just untrue. Not liking how she worded her story doesn’t justify saying it’s ‘interesting’ TheDC ‘revels’ in anti-Semitism.”

Ok so let’s clear up any meshugaas. Tapper doesn’t think I’M anti-Semitic. He just thinks I ‘revel in casual anti-Semitism.”

Associate Editor Peter Hasson also had my back: “[Betsy Rothstein] is herself Jewish, Jake. But I’m sure she’s a huge anti-Semite.”

I replied to Tapper, saying, “Actually, no. The Daily Caller isn’t reveling in anti-Semitism. Not in my writeup. BTW I get the same slurs you do.”

I privately expanded on those thoughts to Tapper after he reached out to me. Sure, we kibitzed for awhile. I won’t reveal what he said as I acquiesced to an off-the-record conversation. But I have no problem sharing what I think because I have nothing to hide.

I do not view Milo’s stunt as anti-Semitic. I thought the dancing midgets were funny and I believe Milo was tailoring the joke to the person. I told Tapper I did not believe that Milo was picking on Shapiro for being Jewish — and Orthodox at that.

I already knew Shapiro was Orthodox. Years ago he invited me to lunch at Washington’s JCC (Jewish Community Center) and couldn’t have been a nicer, warmer human being.

Milo himself put it best: “I’m just being a dick.”

He added, “I just like teasing Ben. It amuses me that he destroyed his career and alienated his audience flipping out over Trump. There’s no great feud.”

I sought comment from Shapiro by email. He initially responded but never reacted to my question about his feelings about the dancing impersonators at Milo’s party.

Milo, whose own mother is Jewish, further explained he was mocking Shapiro, not his religion: “Of course. I thought that was obvious. And it was to everyone at the party. It’s like that [idea of] ‘doing x because she’s a woman.’ No, I did it because she’s a cunt.”

On Saturday, New York Post‘s “Page Six” gossip column covered Milo’s book party in much the same vein that I did, but with far greater detail. They, too, mentioned the “Ben Shapiro” dancers.

“NYP essentially did what I did but in more detail,” I wrote Tapper in an email with a link to the “Page Six” post. “I’m sure you’ll think they revel in anti-Semitism too because they didn’t put a judgment on the dancing midgets. Like me, they just stated and described. Since you feel so entitled and sure in your opinion, I’m sure you’ll feel the need to publicly label and blast them too. Unless of course you just reserve that for The Daily Caller.”

Hmmm. Somehow Jake had no beef with it.

Since I didn’t inform him I would be using his response in an article, I won’t tell you how he replied.

But suffice it to say I don’t think Jake and I will be noshing anytime soon.

Note to readers: For any words you may not know, I’ve provided a Yiddish glossary.

Meshugganah: “A disordered mental condition in which the sufferer is prone to hallucinations. hebephrenia. a form of insanity or dementia praecox that can appear at puberty, characterized by foolish behavior and deterioration of the mental faculties.” (The Free Dictionary)

Verklempt: “Describes a person who is too emotional to speak.” (YourDictionary)

Noshing: to eat a snack or a light meal (The Free Dictionary)