“My office has received some pretty ugly voicemails, threats, terrible things said to my staff,” Collins said in an interview with Maine radio station WVOM.

“A sexual assault victim can’t sleep in her home tonight because of threats. Where are you sleeping? She’s on her own while you and your @SenateGOP colleagues try to rush her through a hearing.” 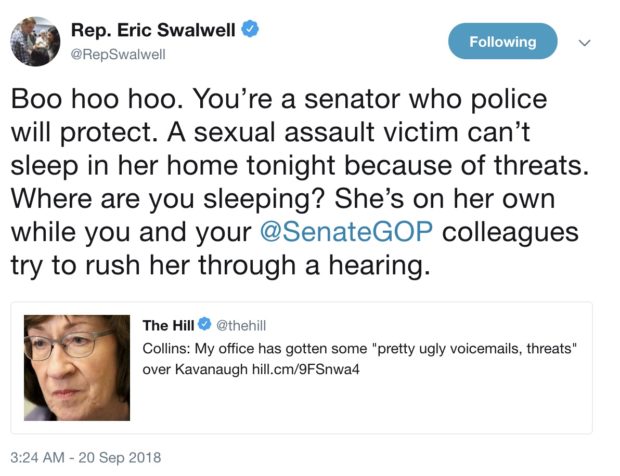 Swalwell was reacting to an article in The Hill, which did not note that Collins said the woman accusing Kavanaugh of sexual assault, Christine Blasey Ford, should receive protection for her and her family.

“I think we need to provide her with any protection that she may ask for, for herself and for her family,” Collins said.

House Majority Whip Steve Scalise, who narrowly survived a politically motivated mass assassination attempt in June 2017, warned in an interview earlier in September that “some on the left” are “inciting” violence against Republicans.

“Sexual assault victims deserve respect. And senators shouldn’t be threatened by the public. I said something stupid and minimized ugly behavior,” Swalwell wrote. “That tweet is deleted and I’m sorry for that.”

This article was updated to include Swalwell’s apology.