Melania Trump took time on Wednesday to praise Medal of Honor recipient Sergeant Major John Canley for his “heroic actions” and service to the nation.

“Thank you Sergeant Major John Canley for your service to our nation. It was an honor to have you and your family at the @WhiteHouse to receive the #MedalofHonor for your heroic actions and leadership under enemy fire,” the first lady tweeted following the ceremony held in the East Room at the White House. (RELATED: Melania Trump’s Plane Turns Around After ‘Mechanical Issue,’ Smoke In Cabin) 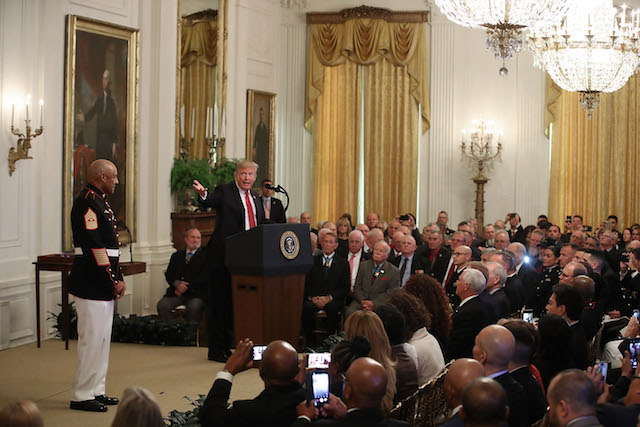 Thank you Sergeant Major John Canley for your service to our nation. It was an honor to have you & your family at the @WhiteHouse to receive the #MedalofHonor for your heroic actions & leadership under enemy fire.

Earlier in the day, FLOTUS flew to Philadelphia as part of her BE BEST campaign where she met with families and children affected by Neonatal Abstinence Syndrome, which affects children born to opioid-addicted mothers.

Speaking at Thomas Jefferson University Hospital, Trump shared that she was proud of the steps the administration has taken to fight opioid addiction, per a pool report from the first lady’s office.

“As many of you are aware, a big part of my Be Best campaign focuses on opioid abuse and the effect it has on children,” FLOTUS shared. “Over the last year and a half, I have learned a great deal about Neonatal Abstinence Syndrome through visits such as these.  I am grateful to the medical professionals who have taken the time to explain their research and their impressive efforts in this field.”

“Later on I will meet with families who have been affected by NAS,” she added. “There are few things harder to bear than seeing a newborn suffer and I am anxious to do all that I can to help shine a light on this epidemic.”

Trump continued, “I am proud of the administration’s continued efforts in fighting opioid addiction. As the caretakers of the next generation, it is our responsibility to protect our most valuable and vulnerable, our children.”