President Barack Obama claimed during a Nevada rally that people should not be happy with what is transpiring in the country right now and that voting will solve that problem.

Nevada Democratic gubernatorial candidate Steve Sisolak was also there despite allegations that he treated his ex-wife like “a total prisoner” during their marriage.

He continued, “The last election, it was probably the same number of people who could fit in a football stadium swayed the entire election. Don’t tell me your vote doesn’t matter. If you do not like what is going on right now, and you shouldn’t, do not complain, do not get anxious, do not throw up your hands, do not boo, vote.”

“When you vote, not just for these candidates, but up and down the line for mayors, and sheriffs, and district attorneys, you have the power to make sure our voting rights are protected and our criminal justice system treats everybody equally under the law,” Obama added. “When you vote, you can protect dreamers and keep families together. And we can finally pass sensible immigration reform that secures our border and strengthens all of us.” 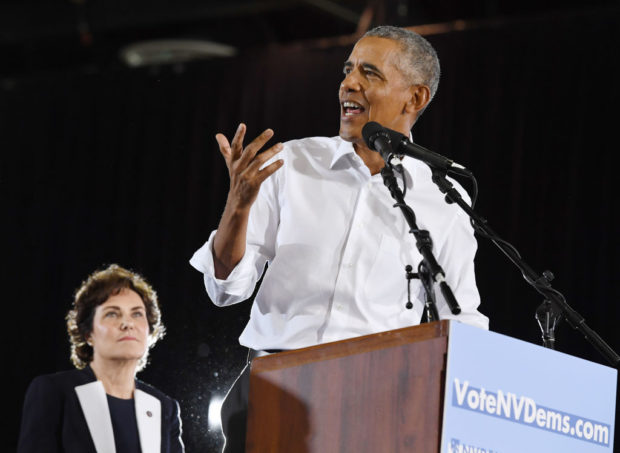 Rosen is going up against the incumbent, Republican Sen. Dean Heller. Heller is the only Republican Senator up for reelection in November in a state that Hillary Clinton won in 2016.

President Trump has held re-election rallies on behalf of Heller in the past. (RELATED: Trump In Nevada: Sen Dean Heller ‘Was There Right From The Beginning’ On Gorsuch And Kavanaugh)