Several hundred Central American migrants tried to force their way past police at a checkpoint on the Mexico-Guatemala border Sunday, sparking clashes that left one migrant dead and dozens more injured.

The group of mostly Honduran men had broken through a gate leading to the border bridge between the Guatemalan town of Tecun Uman and Ciudad Hidalgo in Mexico.

As they streamed onto the bridge, they were met by Mexican officers who had been ordered to block the unauthorized migrants. In the ensuing melee, one of the migrants was killed after being struck in the head by what Guatemalan authorities said was a rubber bullet, The Associated Press reported.

Guatemalan authorities did not release the name of the man who was killed, but described him as a 26-year-old Honduran national. At a news conference late Sunday, Mexican Interior Secretary Alfonso Navarrete Prida denied that Mexican police were responsible for the man’s death.

Navarrate Pida said the migrants attacked officers with rocks, glass bottles and fireworks and that some of the migrants were carrying firearms. He denied that Mexican officers were deployed with guns that fire rubber-tipped ammunition.

The group of migrants involved in Sunday’s clash has billed itself as a second caravan, following a much larger procession of Central American migrants making its way north through Mexico toward the U.S. border. The larger group, which Mexican authorities say numbers about 4,000 people, was resting Sunday in the southern Mexico town of Tapanatepec.

Both caravans are part of a highly publicized surge of migrants from Central America who are trying to get to the U.S border, where they intend to apply for asylum. Some of the migrants say they are fleeing widespread violence in their home countries, while many others, particularly young men, are migrating for economic opportunity. (RELATED: Vast Majority Of Hondurans Immigrate To US For Economic Reasons, Not To Escape Violence) 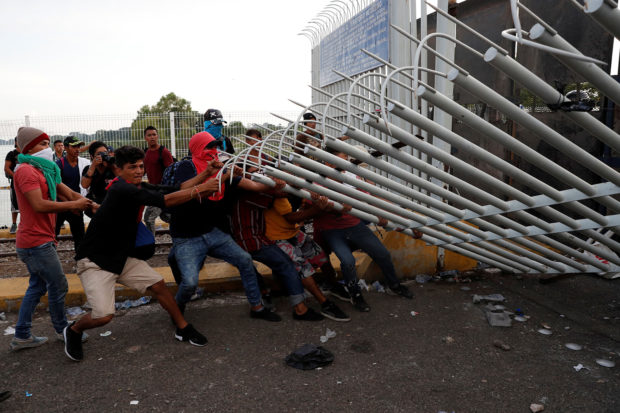 A group of men part of a caravan of thousands of migrants from Central America en route to the U.S, pull down the border gate with the intention to carry on their journey, in Tecun Uman, Guatemala, October 28, 2018. REUTERS/Carlos Garcia Rawlins

President Donald Trump has described the caravans as an “invasion” and has threatened to turn away any migrants who make it to the southwest border. The Trump administration is weighing whether to deploy as many as 5,000 active duty troops to support federal law enforcement with logistics and additional surveillance capabilities.

The large caravan is still about 1,000 miles from the nearest border crossing at McAllen, Texas, and nearly twice that far from the U.S. port of entry near Tijuana. A similar caravan in April ended up in Tijuana, where about 400 of the original 1,500 migrants requested asylum at the port of entry.

Mexico has offered to grant asylum to any caravan migrants who remain in the southern Mexican states of Chiapas and Oaxaca. About 1,700 migrants have applied for asylum in Mexico, but thousands more say they intend to go to the U.S. instead.