Democrats have spent over $1 million on ads for Minnesota Democratic Senator Tina Smith after she skipped a debate against her Republican challenger earlier this month.

Smith decided not to join her Republican opponent Karin Housley for their scheduled debate on October, 22. As a result, Housley instead participated in a live interview on the stage where she was supposed to have debated the Democratic incumbent.

Even without appearing in the debate, Smith is currently favored 47 percent to 41 percent, according to a Star Tribune/MPR News Minnesota Poll released last week. The survey interviewed 800 Minnesotan likely voters and there’s a margin of error of 3.5 percent. The gap between the candidates was only marginally different last month, according to their September poll.

With the race as close as it is, the Democratic Senatorial Campaign Committee has opted to spend $700,000 on local ads that are scheduled to air from Thursday through the election, according to the Washington Examiner. 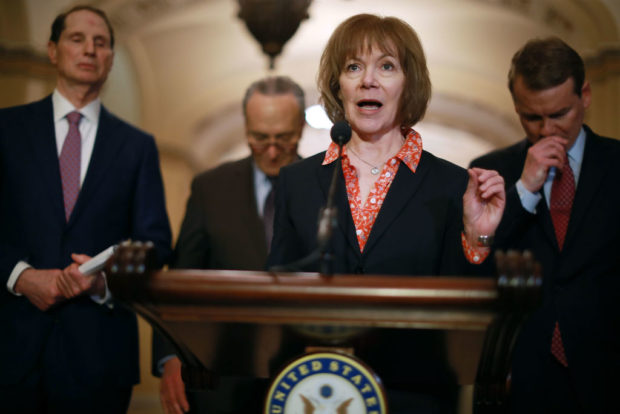 The Senate Majority PAC, a Democratic organization, spent $400,000 on digital ads earlier this week on Smith’s behalf as well, the Examiner also reported.

Housley’s communications director Jake Schneider told TheDC, “With only days to go, the Democrats are tripping over themselves as they try to rescue Tina Smith’s failing campaign. Nobody elected Tina Smith – and for months, she has taken the people of Minnesota for granted, choosing partisan obstruction and political stunts over those she represents.”

He added, “For more than ten months, Karin Housley has traveled all over the state, listening to the issues that really matter. Minnesotans are looking for a Senator who shows up – and that’s Karin Housley.”

Sen. Tina Smith’s office did not immediately respond to a request for comment.

Smith was appointed to the Senate seat by Democratic Governor Mark Dayton last January after former Sen. Al Franken resigned when more than half a dozen women accused him of sexual misconduct. (RELATED: The Race To Replace Al Franken Is Tightening)