From 2001 to 2009, Abrams produced eight books under the pseudonym Selena Montgomery. She claimed to have sold over 100,000 copies and to have won several awards for her writing.

He thrust deep, control broken, shattered. Again and again, deeper and hotter and further than fantasy.

With urgency, she accepted him, fascinated by the power, and for a moment, she wavered, wondering if she was prepared. In the next second, she knew she could never be.

Kat moved beneath him, her body too full to stay motionless. Theirs mouths coupled, imitating the dance that frenzied her limbs, wrapping her into him.

Sebastian flew above her, driven to claim and imprint himself forever. He nuzzled her breast, finding the wild beats, and pressed a kiss just there, sealing his fate. 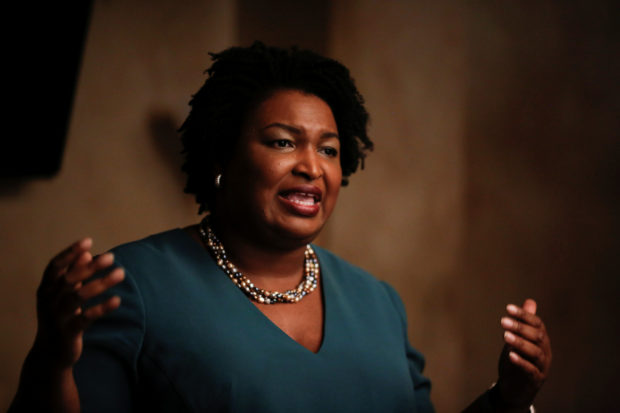 ‘Love me,’ he demanded, taking her up once more.

Afraid she did, Kell kissed him, a merger that spoke words she wasn’t ready to say aloud.

Arousal, ravenous and craven, bent to a stronger, more fragile need that consumed her. She opened for him, and he plunged inside, dragging her to him.

The rhythm caught them both, drove them to demand then offer. Endlessly, wonderfully, they fell into the greedy darkness and fought to give more than either could have imagined. An explosion, his, hers, theirs, brought twin cries and release.

Abrams is in a close gubernatorial race with Georgia Secretary of State Brian Kemp. (RELATED: Georgia Dems Say Kemp Is Avoiding Debate — But Kemp Says It Was Abrams Who Pulled The Plug)