Fox News host Sean Hannity labeled the press as “fake news” after President Donald Trump called him up to the mic at his Missouri rally on Monday night.

“By the way, all those people in the back are fake news,” Hannity stated. (RELATED: Limbaugh Reveals What D.C. Thinks Of Trump Supporters) 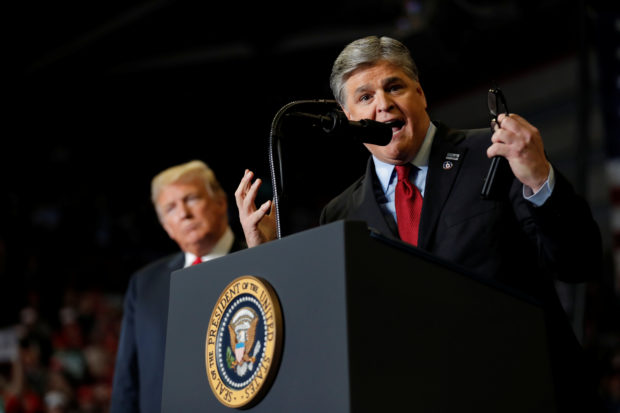 U.S. President Donald Trump listens as Sean Hannity from Fox News speaks at a campaign rally on the eve of the U.S. mid-term elections at the Show Me Center in Cape Girardeau, Missouri, U.S., November 5, 2018. REUTERS/Carlos Barria

“Mr. President, I did an opening monologue today and I had no idea you were going to invite me up here,” he continued. “The one thing that has made and defined your presidency more than anything else, promises made, promises kept, four and a half million new American jobs, 4.3 million Americans off food stamps, 4 million Americans out of poverty, and we are not dropping cash loads — cargo planes of cash to Iranians that chant ‘death to America.’ Mr. President, thank you.”

Hannity was called up by the president despite having tweeted earlier in the day that he was not going to talk during the rally but would be interviewing Trump before it. Fox News also said the same thing.

In spite of reports, I will be doing a live show from Cape Girardeau and interviewing President Trump before the rally. To be clear, I will not be on stage campaigning with the President. I am covering final rally for my show. Something I have done in every election in the past.

The eleventh-hour Missouri rally was meant to give one final push to Republican Senate candidate Josh Hawley, who hopes to upset Democratic incumbent Claire McCaskill in the Senate. They are in a hotly contested race that is viewed as one of the seats most likely to flip.

This was Trump’s last rally before the midterm elections on Tuesday.