“This President’s ongoing attacks on the press have gone too far. They are not only dangerous, they are disturbingly un-American,” CNN’s statement reads. “While President Trump has made it clear he does not respect a free press, he has a sworn obligation to protect it. A free press is vital to democracy, and we stand behind Jim Acosta and his fellow journalists everywhere.”

CNN’s message was in response to a heated back-and-forth between Acosta and Trump during the president’s press conference in which Acosta began by trying to challenge the president on a statement he made about immigration prior to the midterm elections.

Acosta proceeded to bring up the president’s rhetoric about the migrant caravan that’s headed from Central America through Mexico to the southern border of the U.S. 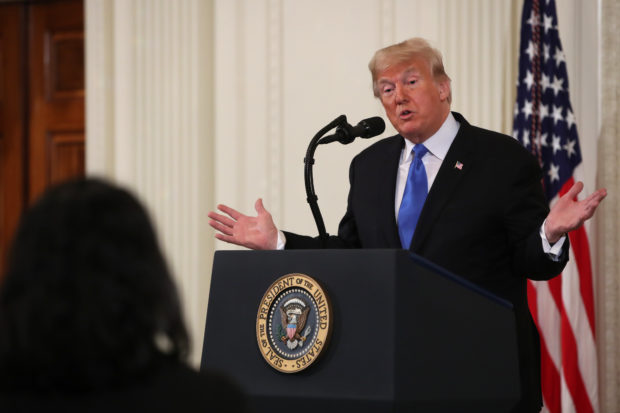 WASHINGTON, DC – NOVEMBER 07: U.S. President Donald Trump answers questions after giving remarks a day after the midterm elections on November 7, 2018 in the East Room of the White House in Washington, DC. Republicans kept the Senate majority but lost control of the House to the Democrats. (Photo by Mark Wilson/Getty Images)

When Trump fired back, Acosta turned to an ad released by the president that many news outlets have refused to show for its depiction of illegal immigrants. (RELATED: Trump Sends First Message Victorious Dems Wanting Investigations: ‘Two Can Play That Game!’)