The panel on Friday’s “CNN Tonight with Don Lemon” consisted of Wilson, Nina Turner, and Alice Stewart. They were discussing the president’s heated remarks towards journalists of color this week.

During Trump’s post-election press conference on Wednesday, he accused PBS reporter Yamiche Alcindor of asking a “racist” question and demanded Ryan sit down while she asked a question before being called on. (RELATED: After Trump’s Scoldinig, Black PBS Reporter Now Has ‘Residue Of Hate’)

Then, while addressing reporters before departing on his trip to Europe, Trump called a question from CNN’s Abby Phillip “stupid.”

“And look, when you’re the president of the United States and you ask for the resignation of your A.G. And replace him with someone that has been critical of the Mueller investigation, as president you should be prepped that one of the questions you’re going to be asked is are you expecting this Mueller investigation to be reigned in,” Stewart stated.

She continued, “Abby’s question was not a stupid question, it was just the question of the day. He simply just didn’t want to answer it. So instead of answering the question or just deflecting or saying no, he attacked her. I just think that’s the wrong way to go about it, and it doesn’t make it any better to say he’s an equal opportunity offender.”

“I understand what Alice is saying, but what I want Alice to understand and the viewers to understand, there’s historic significance to the stereotypes of calling African-Americans dumb and losers and stupid. He even called Omarosa a dog,” Turner chimed in. 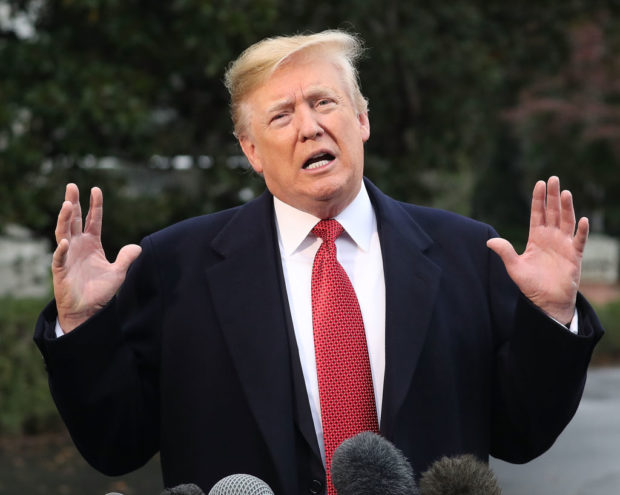 WASHINGTON, DC – NOVEMBER 09: U.S. President Donald Trump speaks to the media before departing on Marine One on the South Lawn of the White House on November 9, 2018 in Washington, DC. (Mark Wilson/Getty Images)

“I think that angry Donald Trump is often closer to the true core of this guy than anything else we see. And in all of these exchanges particularly when he was telling April to sit down, all I could think of is this guy is like one millisecond away from the N-word,” Wilson added. “He hates her. It’s obvious, it’s tangible and his inability to control his anger and his temper is remarkable.”